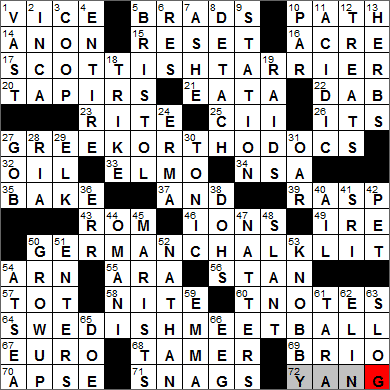 CROSSWORD SETTER: Jim Holland
THEME: Sounds Like Something … each of the themed answers sounds like a well-known phrase:

Today’s Wiki-est, Amazonian Googlies
Across
5. Sharp fasteners BRADS
“Brad” is a name given to the brass fastener that is used to hold sheets of paper together. The brad is used by inserting it through holes punched in the paper, and then spreading out the two legs of the fastener.

14. In a while ANON
“Anon” originally meant “at once” and evolved into today’s meaning of “soon” apparently just because the word was misused over time.

17. One lingering in Edinburgh? SCOTTISH TARRIER (from “Scottish Terrier”)
Scottish Terrier is another name for the Aberdeen Terrier, commonly referred to as the Scottie. One of the most famous Scotties in American history was Fala, the much-loved dog belonging to President Franklin D. Roosevelt. Also, the Scottie is famous as one of the playing pieces in the original game of Monopoly.

20. Hoglike mammals TAPIRS
All four species of tapir are endangered. Even though the tapir looks much like a pig, it is more closely related to the horse and the rhinoceros.

23. Stravinsky’s “The __ of Spring” RITE
“The Rite of Spring” (“Le Sacre du Printemps” in French) is a ballet and orchestral work by Igor Stravinsky. The ballet premiered in Paris in 1913 and was received very, very poorly as the music and dancing was quite avant-garde. Since then, “The Rite of Spring” has become an extremely influential work, but to be honest, it’s not a favorite of mine …

27. Some Athenian physicians? GREEK ORTHO DOCS (from “Greek Orthodox”)
Greek Orthodox is the name given to several Eastern Orthodox Christian traditions. The Greek Orthodox liturgy is conducted in the Koine Greek, which was the original language of the Bible’s New Testament.

33. Big Bird buddy ELMO
The man behind/under the character Elmo on “Sesame Street” is Kevin Clash. If you want to learn more about Elmo and Clash, you can watch the 2011 documentary “Being Elmo: A Puppeteer’s Journey”.

34. DOD subdivision NSA
The National Security Agency (NSA) is part of the Department of Defense. The Central Intelligence Agency (CIA) used to report directly to the President, but now reports to the Director of National Intelligence, a position created in 2004 by the Bush administration.

43. CD conclusion? ROM
CD-ROM stands for “compact disc read only memory”. The name indicates that you can read information from the disc (like a standard music CD for example), but you cannot write to it. You can also buy a CD-RW, which stands for “compact disc – rewritable”, with which you can read data and also write over it multiple times using a suitable CD drive.

54. Valiant son ARN
Arn was the eldest son of Prince Valiant, the comic strip hero. Edward, the Duke of Windsor, called the “Prince Valiant” comic strip the “greatest contribution to English Literature in the past one hundred years”. I’m not so sure …

55. Heavenly altar ARA
The constellation of Ara takes its name from the Latin word for “altar”.

58. Personal time? NITE
Addict (below) helpfully points out that “nite” is a spelling that is used in a “personal”, a personal ad.

60. Some govt. investments T-NOTES
A Treasury note (T-Note) is a government debt that matures in 1-10 years. A T-Note has a coupon (interest) payment made every six months. The T-note is purchased at a discount to face value, and at the date of maturity can be redeemed at that face value. A T-Bill is a similar financial vehicle, but it matures in one year or less, and a T-Bond matures in 20-30 years.

67. New coin of 2002 EURO
The European Union (EU) today stands at a membership of 27 states. The Euro is the official currency of only 16 of the 27. The list of states in the EU that don’t use the Euro includes the UK, Denmark and Sweden.

69. Vivacity BRIO
“Brio” is borrowed from Italian, in which language it means vigor and vivacity. “Con brio” is a musical direction often found on a score, instructing the musicians to play “with energy, vigor”.

70. Church section APSE
The apse of a church or cathedral is a semicircular recess in an outer wall, usually with a half-dome as a roof and often where there resides an altar. Originally apses were used as burial places for the clergy and also for storage of important relics.

72. Oh’s role in “Grey’s Anatomy” YANG
The Canadian actress Sandra Oh is very much associated these days with the role of Dr. Cristina Yang on “Grey’s Anatomy”. However, my favorite of Oh’s performances were in the movies :Under the Tuscan Sun” and “Sideways”.

Down
2. Worshipper of the Earth goddess Pachamama INCA
Pachamama is a goddess worshipped by indigenous peoples in the Andes of South America. “Pachamama” translates best as “Mother World” and embraces the whole universe as opposed to just the Earth.

3. Condo cousin COOP
The words “condominium” and “apartment” tend to describe the one type of residential property, a private living space with facilities shared with others residing in the same building or complex. The difference is that a condominium is usually owned, and an apartment is rented. At least that’s how it is in the US. The word “condominium” comes from the Latin “com” (together) and “dominum” (right of ownership).

5. British university city BRISTOL
Bristol is the most populous city in the southwest of England. Bristol is a port city, one that had an important role in growth of slavery in America. Manufactured goods from the UK were shipped from Bristol to West Africa where they were traded for Africans who were forcibly transported across the Atlantic for trade in the Americas. The slave ships brought back plantation goods to Bristol.

7. “Off the Court” author ASHE
“Off the Court” is a 1981 autobiography by tennis player Arthur Ashe. The book deals with Ashe’s life off the court including his involvement in the struggle against apartheid in South Africa.

24. First name in humor ERMA
Erma Bombeck wrote for newspapers for about 35 years, producing more than 4,000 witty and humorous columns describing her home life in suburbia.

29. One who observes a fraternal Hour of Recollection ELK
The Benevolent and Protective Order of Elks (BPOE) was founded in 1868, and is a social club that has about a million members today. It started out as a group of men getting together in a “club” in order to get around the legal opening hours of taverns in New York City. The club took on a new role as it started to look out for poor families of members who passed away. The club now accepts African Americans as members (since the seventies) and women (since the nineties), but atheists still aren’t welcome.

One of the traditions observed by the Benevolent and Protective Order of Elks (BPOE) is the Hour of Recollection. At 11 pm every evening, members are encouraged to remember those members who have passed away.

31. One leaving a wake OAR
A wake is the visible track of turbulent water left behind by something moving through the water, like a boat or even an oar perhaps.

38. Self-recriminating cries D’OHS!
“The Simpsons” is one of the most successful programs produced by the Fox Broadcasting Company. Homer Simpson’s catchphrase is “D’oh!”, which is such a famous exclamation that it has been included in the Oxford English Dictionary (OED) since 2001.

41. Hindu title SRI
“Sri” is a title of respect for a male in India.

44. Muscat native OMANI
Oman lies on the southeast coast of the Arabian Peninsula and is neighbored by the OAE, Saudi Arabia and Yemen. The capital city of Muscat has a strategic location on the Gulf of Oman and has a history of invasion and unrest. Centuries of occupation by the Persians ended in 1507 when the Portuguese took the city in a bloody attack. The Portuguese held Muscat for much of the next one hundred years until finally being ousted by local Omani forces in 1648. A Yemeni tribe invaded the area in 1741 and set up a monarchy that has been in place in Oman ever since.

45. Some Roman Catholics MARISTS
There are several orders in the Roman Catholic church who are named for Mary the Mother of Jesus. Members of such orders might be called “Marists”. Examples are the Marist Brothers and the Marist Sisters.

“Guys and Dolls” is a musical with music and lyrics by Frank Loesser. It was first produced on Broadway, in 1950, and ran for 1200 performances. The show was based on a book written by Jo Swerling and Abe Burrows. “Guys and Dolls” was chosen as winner of a Pulitzer in 1951, but the award was cancelled as Abe Burrows was having problems with the House Un-American Activities Committee at the time.

59. Peel on “The Avengers” EMMA
61. King who succeeded 59-Down TARA
“The Avengers” was must-see television when I was growing up. “The Avengers” was a sixties comedy spy series set in England during the days of the Cold War. The hero was John Steed, played ably by Patrick MacNee. Steed had various female partners as the series progressed, the first of which was Cathy Gale, played by Honor Blackman (who also played Pussy Galore in “Goldfinger”). Following Ms. Gale was Emma Peel played by the wonderful Diana Rigg. Finally there was Tara King, played by Linda Thorson.

62. Swedish model Nordegren in 2004 nuptial news ELIN
Elin Nordegren is the ex-wife of Tiger Woods. Nordegren is a native of Sweden, and it was back in Sweden that she was hired as a nanny by the wife of golfer Jasper Parnevik. The job brought her to the US where she became a popular attraction on the professional golfing circuit. Apparently there was a long line of single golfers who wanted to be introduced to her, with Tiger Woods asking for an introduction for a year before he finally got to go out with her. The pair were married in 2004.

66. Hosp. test EEG
An electroencephalogram (EEG) is a record of electrical activity caused by the firing of neurons within the brain. The EEG might be used to diagnose epilepsy, or perhaps to determine if a patient is “brain dead”.