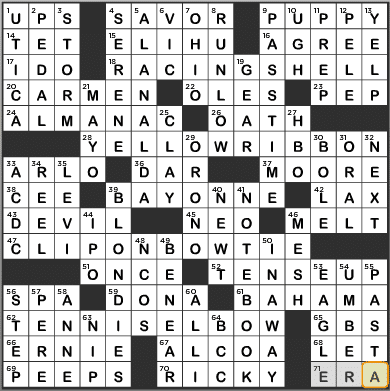 CROSSWORD SETTER: Gareth Bain
THEME: At Last, Carbs from Italy … each of today’s themed answers ends with a type of pasta:

55D. Food found in the shapes at the ends of the answers to starred clues : PASTA

Today’s Wiki-est, Amazonian Googlies
Across
1. Co. with brown trucks : UPS
United Parcel Service (UPS) is based in Sandy Springs, Georgia and has its own airline that operates out of Louisville, Kentucky.

15. Yale or Root : ELIHU
Elihu Yale was a wealthy merchant born in Boston in 1649. Yale worked for the British East India Company, and for many years served as governor of a settlement at Madras (now Chennai) in India. After India, Yale took over his father’s estate near Wrexham in Wales. It was while resident in Wrexham that Yale responded to a request for financial support for the Collegiate School of Connecticut in 1701. He sent the school a donation, which was used to erect a new building in New Haven that was named “Yale” in his honor. In 1718, the whole school was renamed to “Yale College”. To this day, students of Yale are nicknamed “Elis”, again honoring Elihu.

18. *Sculling competition craft : RACING SHELL
A scull is a boat used for competitive rowing. The main hull of the boat is often referred to as a shell.

20. “Toreador Song” opera : CARMEN
Georg Bizet was a French composer active in the Romantic era. Bizet’s most famous work has to be his opera “Carmen”. “Carmen” initially received a lukewarm reception from the public, even though his fellow composers had nothing but praise for it. Sadly Bizet died at only 36 years of age, before he could see “Carmen’s” tremendous success.

“Votre toast, je peux vous le rendre” is more commonly called “The Toreador Song”, and is one of the most famous arias in Georges Bizet’s opera “Carmen”. “Toreador” is an old Spanish word for a bullfighter, but it’s a term not used any more in Spain nor in Latin America. In English we use the term “toreador”, but in Spanish a bullfighter is a “torero”.

22. Cheers for Escamillo in 20-Across : OLES
In Bizet’s opera “Carmen”, the title character falls in love with a glamorous toreador (bullfighter) named Escamillo.

28. *”Support our troops” symbol : YELLOW RIBBON
A yellow ribbon is symbolically worn by people awaiting the return of a loved one, usually from military service overseas, but also from a penal institution. The tradition dates back to the English Civil War (1642-1651). The Puritan Army that supported the English Parliament wore yellow ribbons when going into battle.

33. Singer Guthrie : ARLO
Arlo Guthrie is the son of Woody Guthrie. Both father and son are renowned for their singing of protest songs about social injustice. Arlo is most famous for his epic “Alice’s Restaurant Massacree”, a song that lasts a full 18m 34s. In the song Guthrie tells how, after being drafted, he was rejected for service in the Vietnam War based on his criminal record. He had only one incident on his public record, a Thanksgiving Day arrest for littering and being a public nuisance when he was 18-years-old.

37. Comic actor Dudley : MOORE
The comic actor Dudley Moore was perhaps most famous in his homeland of the UK as half of a groundbreaking comedy duo called simply Peter Cook and Dudley Moore. Relatively late in his career, Moore broke into Hollywood with a supporting role in “Foul Play” (1978) and a leading role in “10” (1979) and “Arthur” (1981). Moore was also a highly accomplished piano player and gave many concert performances.

45. Prefix with -lithic : NEO
A neolith is a stone tool that was produced during the Neolithic Era, the last part of the Stone Age.

59. Lady of Lisbon : DONA
In Portugal a title of respect for men is “Dom”. The equivalent female title is “Dona”.

61. Freeport’s “Grand” island : BAHAMA
Freeport is a port city on the island of Grand Bahama, and is the second largest city in the Bahamas (after the capital Nassau).

65. “Pygmalion” playwright’s initials : GBS
George Bernard Shaw was a very successful Irish playwright. Shaw is the only person to have been awarded both a Nobel Prize for Literature, and an Oscar. He won his Oscar for adapting his own play “Pygmalion” for the 1938 film of the same name starring Leslie Howard and Wendy Hiller. Most people are more likely to have seen the musical adaptation of “Pygmalion” that went by the title “My Fair Lady”.

66. Els with tees : ERNIE
Ernie Els is a South African golfer. Els a big guy but he has an easy fluid golf swing that has earned him the nickname “The Big Easy”. He has a child who suffers from autism and so Els has been very effective in raising money for charities that focus on the condition.

67. Big name in metal wrap : ALCOA
The Aluminum Corporation of America (ALCOA) is the largest producer of aluminum in the United States. The company was founded in 1888 in Pittsburgh, Pennsylvania where its headquarters are to this day.

69. Buddies, in slang : PEEPS
“Peeps” is a slang term for one’s associates or friends, one’s “people”.

70. British comedian Gervais : RICKY
I’d say that in North America, comedian Ricky Gervais is best known as the writer and lead actor in the original version of the TV show “The Office”. Gervais’s role was taken on by Michael Scott in the US rendition of the sitcom. “The Office” just finished its run here in the US, but there is a German version that is still going strong and there is a Chinese version in the works.

Down
1. Seat of New York’s Oneida County : UTICA
Today, Utica in New York is known as “Second Chance City” due to the recent influx of refugees from war-torn parts of the world, and from Bosnia in particular. These immigrants have helped revitalize the area and reverse a trend of population loss.

5. Hawkeye Pierce portrayer : ALAN ALDA
Alan Alda had a great television career, especially of course on “M*A*S*H”. Alda won his first Emmy in 1972, for playing Hawkeye Pierce on “M*A*S*H”. He won his most recent Emmy in 2006 for his portrayal of Presidential candidate Arnold Vinick in “The West Wing”. When it comes to the big screen, my favorite of Alda’s movies is the 1978 romantic comedy “Same Time, Next Year” in which he starred opposite Ellen Burstyn.

6. London’s Old __ : VIC
The Old Vic is a very famous theater (or I should I say “theatre”?) in London, previously known as the Royal Coburg Theatre and then the Royal Victorian Theatre (giving it the current name “The Old Vic”). The theater owes a lot of its fame and standing to the fact that it housed the National Theater of Great Britain after it was founded in 1963 by Sir Laurence Olivier. Today the National Theater has new, modern premises, but the Old Vic Theatre Company stills garners a lot of attention. The current, and very energetic, artistic director of the company is American actor, Kevin Spacey.

7. Buckeye State : OHIO
Ohio is sometimes referred to as the Buckeye State, taking the name from the state tree. In turn, the buckeye tree gets its name from the appearance of its fruit, a dark nut with a light patch, thought to resemble a “buck’s eye”.

11. GRE practice : PREP
Passing the Graduate Record Examination (GRE) is usually a requirement for entry into graduate school here in the US.

12. One-named soccer immortal : PELE
Pelé is the nickname of Edson de Nascimento, a soccer player who has used the name Pelé for most of his life. Pelé is now retired, and for my money was the world’s greatest ever player of the game. He is the only person to have been part of three World Cup winning squads, and is a national treasure in his native Brazil.

13. Website with restaurant reviews : YELP
yelp.com is a website that provides a local business directory and reviews of services. The site is sort of like Yellow Pages on steroids, and the term “yelp” is derived from “yel-low p-ages”.

21. BLT dressing : MAYO
Mayonnaise originated in the town of Mahon in Menorca, a Mediterranean island belonging to Spain. The Spanish called the sauce “salsa mahonesa” after the town, and this morphed into the French word “mayonnaise” that we use in English today.

The BLT (bacon, lettuce and tomato) is the second most popular sandwich in the US, after the plain old ham sandwich.

25. Medium for some animators : CLAY
Clay animation is also known as “claymation”, and has been around since the early 1900s.

33. Outlet letters : AC/DC
If you have a laptop with an external power supply then that big “block” is an AC/DC converter. It converts the AC current you get from a wall socket into the DC current that is used by the laptop.

35. First name in jeans : LEVI
Levi Strauss was the founder of the first company in the world to manufacture blue jeans. Levi Strauss & Co. opened in 1853 in San Francisco. Strauss and his business partner were awarded a patent in 1873 for the use of copper rivets to strengthen points of strain on working pants.

44. Much-hyped NASDAQ event for Facebook : IPO
An Initial Public Offering (IPO) is the very first offer of stock for sale by a company on the open market. In other words, an IPO marks the first time that a company is traded on a public exchange. Companies have an IPO to raise capital to expand (usually).

48. Cpls. and sgts. : NCOS
An NCO is a non-commissioned officer in the armed forces. Usually such an officer is one who has earned his or her rank by promotion through the enlisted ranks. A good example would be a sergeant.

57. Famille patriarch : PERE
In French, a father (père) has an important role in a family (famille).

58. Writing sister of Emily and Charlotte : ANNE
Anne was the youngest of the three sisters in the literary Brontë family. Her older sisters wrote novels that are more recognized, but Anne’s two novels do have a following. “Agnes Grey” is based on her own experiences working as a governess. Her other novel, “The Tenant of Wildfell Hall” is written as a long letter from a young man describing the events leading up to his first meeting with his wife-to-be. Anne Brontë’s writing career was cut short in 1849, when she died of pulmonary tuberculosis, at only 29 years of age.

64. Send covertly, as a dupe email : BCC
A blind carbon copy (bcc) is a copy of a document or message that is sent to someone without other recipients of the message knowing about that extra copy.