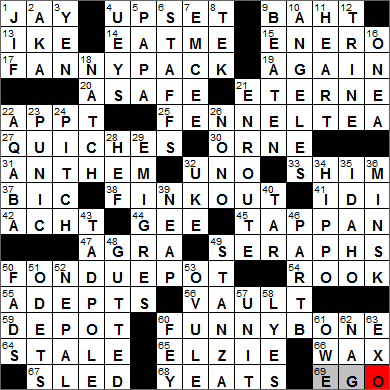 17A. Waist bag FANNY PACK
25A. Herbal remedy for indigestion FENNEL TEA
38A. Renege FINK OUT
50A. Piece of Le Creuset cookware FONDUE POT
60A. Sense of humor FUNNY BONE

Today’s Wiki-est, Amazonian Googlies
Across
9. Thai cash BAHT
The baht is the currency of Thailand, and is subdivided into 100 satang.

13. Musician Turner IKE
Ike and Tina Turner were together as a husband/wife duo recording music for 16 years in the sixties and seventies. Ike and Tina’s biggest hit has to be “Proud Mary”, released in 1971. The partnership ended, along with their marriage, in the late seventies with Tina making accusations of abuse by her drug-addicted husband.

14. Words Alice read on a cake EAT ME
In Lewis Carroll’s “Alice’s Adventures in Wonderland”, Alice follows the white rabbit down a rabbit hole and finds a bottle labelled “DRINK ME”. When she drinks the contents, it causes her to shrink. She also sees a cake adorned with the words “EAT ME”, and when she eats the cake she grows so big she finds it hard to stand up. After eating the cake, she utters the famous words, “Curiouser and curiouser”.

15. Month in Madrid ENERO
In Spanish, a year (año) starts in January (enero) and ends in December (diciembre).

17. Waist bag FANNY PACK
In the British Isles, a “fanny pack” is called a “bum bag”. The use of the word “bum” is considered more polite than the word “fanny”, which has a very rude meaning in that part of the world.

22. Cal. entry APPT
One might record an appointment (appt.) in a calendar (cal.).

27. Custard dishes QUICHES
The classic dish called quiche is made with eggs (“oeufs” in French). Even though the quiche is inextricably linked to French cuisine, the name “quiche” comes from the German word for cake, “Kuchen”. The variant called “quiche lorraine” includes bits of smoked bacon as an ingredient.

30. River in NW France ORNE
Orne is a department and river in the northwest of France. Perhaps one of the most famous locations in Orne is the village of Camembert, the home of the famous (and delicious!) cheese.

31. “The Star-Spangled Banner,” e.g. ANTHEM
The lyrics of “The Star-Spangled Banner” were written first as a poem by Francis Scott Key, inspired by the bombarding by the British of the American forces at Fort McHenry that he witnessed during the Battle of Baltimore in September 1814. The words were then set to the tune of a popular British drinking song penned by John Stafford Smith called “The Anacreontic Song”, with the Anacreontic Society being a men’s club in London.

32. Countdown-ending número UNO
In Spanish, one might count down to number one (número uno).

37. Pen name BIC
Société Bic is a French company, based in Clichy in France. The first product the company produced, more than fifty years ago, was the Bic Cristal ballpoint pen that is still produced today. Bic also makes other disposable products such as lighters and razors.

38. Renege FINK OUT
To renege on something is to back out of it. It’s a word commonly used in card games like bridge and whist. A renege is when a player doesn’t follow suit, even though there may be a card of the suit led in his/her hand.

41. Amin of Uganda IDI
Idi Amin received most of his military training in the British armed forces, eventually achieving the highest rank possible for a Black African in the British Colonial Army in 1959, that of Warrant Officer. On his return to Uganda Amin joined his country’s military and quickly rose to the rank of Deputy Commander of the Army. During that time he was quite the athlete. He was a noted rugby player and swimmer, and for nine years held the Ugandan national light-heavyweight boxing title. By the early seventies, Amin was commander of all the armed forces of Uganda and in 1971 seized power in a military coup, displacing the country’s president Milton Obote. There followed seven years of brutal rule by Amin during which it is estimated that between 100,000 and 500,000 people were murdered. Amin was ousted from power in 1979 after a war with Tanzania, and fled to Libya where he stayed for a year. He then moved to Saudi Arabia, where he was financially supported by the Saudi Royal Family for the remainder of his life. Amin died in 2003.

45. __ Zee: area where the Hudson River widens TAPPAN
The Tappan Zee is a 10-mile stretch of the Hudson River in New York, a place where there is a widening of the waterway. The name comes from the Tappan Native American people and the Dutch word “zee” meaning “sea” or “wide expanse of water”.

47. Taj Mahal home AGRA
The most famous mausoleum in the world has to be the Taj Mahal in Agra, India. The Taj Mahal was built after the death of the third wife of Shah Jahan, Mumtaz Mahal (hence the name of the mausoleum). The poor woman died in childbirth delivering the couple’s 14th child.

49. Heavenly higher-ups, in Christianity SERAPHS
A seraph is a celestial being found in Hebrew and Christian writings. The word “seraph” (plural “seraphim”) literally translates as “burning one”.

50. Piece of Le Creuset cookware FONDUE POT
“Fondu(e)” is the French word for “melted”, as in “melted cheese” found in a fondue pot.

Le Creuset is a French manufacturer of cookware. The company’s signature product is its “French oven”, an enameled cast-iron casserole also called a “Dutch oven”.

54. Chess piece ROOK
The corner piece in the game of chess is a called a rook, a word coming from the Persian word “rokh” meaning a “chariot”. The rook has also been called, perhaps incorrectly, the castle, tower, marquess and rector.

60. Sense of humor FUNNY BONE
The ulnar nerve runs alongside the ulna (one of the bones in the lower arm). The ulnar nerve is the largest unprotected (not surrounded by muscle or bone) nerve in the human body. The nerve can be touched under the skin at the outside of the elbow. Striking the nerve at this point causes and an electric type shock, known as hitting one’s “funny bone”.

65. Popeye creator Segar ELZIE
Elzie Segar was a cartoonist who went by the name E. C. Segar. Segar was the man who created the strip “Thimble Theater”, home of the character Popeye.

67. Kane’s Rosebud, e.g. SLED
A central plot line in the 1941 movie “Citizen Kane” is a newsreel reporter’s quest to find the meaning of the dying word spoken by the title character: “Rosebud”. Spoiler Alert … it is revealed at the end of the movie that “Rosebud” is the name of the sled used by Kane in his childhood, the only period in which he was really happy.

Down
1. Peanut butter brand JIF
Jif is the leading brand of peanut butter in the US, and has been since 1981. Introduced in 1958, it is now produced by Smuckers.

3. Hankering YEN
The word “yen”, meaning “urge”, has been around in English since the very early 1900s. It comes from the earlier word “yin” imported from Chinese, which was used in English to describe an intense craving for opium!

4. They may be done by ones who have gone too far UEYS
U-turn (Uey)

8. “__War”: Shatner series TEK
The “Tekwar” series of science-fiction novels was co-authored by Ron Goulart and the actor William Shatner, although it’s only Shatner’s name that appears on the book covers. The stories center around the microchip “drug” called “tek” which dominates the Tekwar universe.

12. Puzzle video game with three heroes TRINE
“Trine” is an action and puzzle video game that was introduced in 2009. The player can control three characters in the game: a thief, a knight and a wizard. “Trine” means threefold, from the Latin “trinus” which means the same thing. “Trine” is also used for a group of three.

16. Top draft status ONE-A
The US government maintains information on all males who are potentially subject to military conscription, using what is called the Selective Service System(SS). In the event that a draft was held, men registered would be classified into groups to determine eligibility for service. Class 1-A registrants are those available for unrestricted military service. Other classes are 1-A-O (conscientious objector available for noncombatant service), 4-A (registrant who has completed military service) and 4-D (Minister of religion).

18. “Of course!” NATCH!
“Natch” is a slang term meaning “naturally, of course”. “Natch” is simply a shortening of the word “‘naturally”, and was first recorded at the end of WWII.

22. Red Sea port on its own gulf AQABA
The coastal city of Aqaba is the only seaport in the country of Jordan. The city lies at the very northern tip of the Gulf of Aqaba, which is off the Red Sea.

23. __ Wars: Rome vs. Carthage PUNIC
The Punic Wars were a series of three conflicts fought between Ancient Rome and Ancient Carthage. With Carthage on the North African coast and Rome on the east coast of Italy, the Punic wars were largely an attempt to control the western Mediterranean Sea and were centered on the island of Sicily.

28. Playboy nickname HEF
Hugh Hefner is from Chicago. His first publishing job was in the military, where he worked as a writer for a US Army newspaper from 1944-46. He went to college after his military service and then worked as a copywriter for “Esquire” magazine. He left “Esquire” to found his own publication that he called “Playboy”, which first hit the newsstands in 1953. “Playboy” has been around ever since.

32. Island instrument UKE
The ukulele originated in the 1800s and mimicked a small guitar brought to the Hawaiian Islands by Portuguese immigrants.

34. River horse HIPPO
The name “hippopotamus” comes from the Greek for “river horse”. Hippos are the third largest land mammals, after elephants and rhinos. The closest living relatives to hippos don’t even live on land. They are the whales and porpoises of the oceans.

35. Snake River state IDAHO
The Snake River in the US northwest is the largest tributary of the Columbia River.

36. Belarus capital MINSK
Minsk is the capital of Belarus, formerly known as the Belorussian Soviet Socialist Republic. One of Minsk’s more infamous residents was Lee Harvey Oswald who lived there from 1960 to 1962.

46. Medicare section for physician services PART B
Medicare is divided into four parts:

49. Verse segment STANZA
“Stanza” is the Italian word meaning “verse of a poem”.

50. Hula Hoop et al. FADS
Hula hoops were a big craze in the 1950s, but they have been around in various forms at least since the year 500 BCE!

51. “Golden Boy” dramatist ODETS
Clifford Odets was a playwright, screenwriter and director from Philadelphia. “Golden Boy” was a play written by Odets that was first performed in 1937 on Broadway. There was a film adaptation released in 1939 that starred a young William Holden. “Golden Boy” was the film that launched Holden’s career.

52. India neighbor NEPAL
Nepal lies to the northeast of India. Today, the state is known as the Federal Democratic Republic of Nepal. In 2008, the Communist Party of Nepal won the country’s general election. Soon after, the Assembly voted to change the form of government, moving away from a monarchy and creating a secular republic.

60. “30 Rock” star FEY
Comic actress Tina Fey has a scar on her face a few inches long on her left cheek, which I was shocked to learn was caused by a childhood “slashing” incident. When she was just five years old and playing in the front yard of her house, someone just came up to her and slashed her with a knife. How despicable!