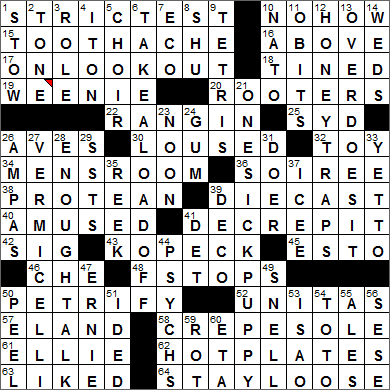 19. __ roast WEENIE
What we call a wiener in this country is known as a Vienna sausage in Germany. It was first produced by a butcher from Frankfurt who was living in Vienna, hence the name “Wiener”, which is German for “of Vienna”. Paradoxically, the same sausage is called a Frankfurter in Vienna, as it was created by someone from Frankfurt. It’s all very confusing …

26. Marathon rtes., perhaps AVES
The marathon is run over 26 miles and 385 yards, and of course commemorates the legendary messenger-run by Pheidippides from the site of the Battle of Marathon back to Athens. The actual distance run today was decided in 1921, and matches the length of the modern-day Marathon-Athens highway.

36. Evening affair SOIREE
“Soir” is the French word for “evening” and a “soirée” is an “evening party”. The French word “soirée” has an acute accent over the first “e”, but we tend to drop this when using the word in English.

38. Readily assuming different forms PROTEAN
In Greek mythology, the sea-god Proteus had the ability to take on new shapes to hide himself. This led to our word “protean”, meaning someone or something that is ever-changing and versatile.

39. Like original Matchbox cars DIE-CAST
The brand name Matchbox toy cars were introduced in 1953, and how I loved them growing up. They were called Matchbox cars because they were packed in boxes that looked liked regular matchboxes. The brand was English, but the name spread around the world. The brand was so popular that the term “matchbox car” came to mean any small, die-cast toy car, regardless of who made it.

42. Ruman of “Stalag 17” SIG
Sig Ruman was a German-American actor from Hamburg. Early in his career, Ruman appeared in several of the Marx Brothers movies. He was a big man, and with his German accent he got lots of work during WWII playing Nazi bad guys. Perhaps most famously, Ruman played Sergeant Johann Schulz in the 1953’s “STALAG 17”.

43. Krona : öre :: ruble : __ KOPECK
The ruble (also “rouble”) is the unit of currency in Russia, as well as several other countries of the former Soviet Union. One ruble is divided into one hundred kopecks.

The Swedish Krona is divided into 100 öres, a term derived from the Latin “aureus” meaning “gold”.

45. __ perpetua: Idaho’s motto ESTO
“Esto perpetua” is the Latin phrase meaning, “Let it be perpetual”. It is used as the motto of a number of groups, as well as the state of Idaho. The words are attributed to the theologian Paolo Sarpi (Fra Paolo), his last words, a wish for his native Venice, “let it be perpetual”.

46. 2008 Soderbergh biopic CHE
“Che” is a 2008 film about the life of the revolutionary hero Che Guevara. Starring Benicio del Toro in the title role, the movie is in two parts. The first part is called “The Argentine” and deals with the part Guevara played in the Cuban Revolution. Part two is called “Guerrilla” and covers Guevara’s attempt to foment revolution in Bolivia.

48. Shooting ratios F-STOPS
Varying the f-stop in a lens varies how big the lens opening (the aperture) is when a photograph is taken. Smaller apertures (higher f-stop values) admit less light, but result in sharper photographs.

52. First NFL Man of the Year Award recipient (1970) UNITAS
Footballer Johnny Unitas was nicknamed “the Golden Arm” as well as “Johnny U”. Unitas played in the fifties through the seventies, mainly for the Baltimore Colts. He held the record for throwing touchdown passes in consecutive games (47 games) for 52 years, until it was surpassed in 2012 by Drew Brees.

57. Savannah sighting ELAND
An eland is a large African antelope, in fact the largest on the continent.

58. Chukka boot feature CREPE SOLE
Chukka boots are also known as desert boots. They cover the ankle and are usually made from calfskin or suede and have a crepe sole. The name “chukka” comes from the sport of polo, in which a chuka is a period of play.

61. Actress Kemper of “The Office” ELLIE
When Pam gave up her spot at the reception desk in the US version of the hit sitcom “The Office”, it was taken over by Kelly Erin Hannon. Erin, as she is known, is played by Ellie Kemper. Kemper had auditioned for the sitcom “Parks and Recreation” but didn’t get the part. However, she did get a call back to play on “The Office”. I think it’s a great show, and the addition of the character called Erin adds a lot …

8. Moo __ pork SHU
Moo shu pork is a traditional dish from northern China, with the main ingredients being shredded pork and scrambled egg.

9. Game for shapeshifters? TETRIS
Tetris is a very addictive video game that was developed in the Soviet Union in 1984. The name Tetris comes from a melding of the prefix “tetra-” (as all the game pieces have four segments) and “tennis” (a favorite sport played by the developer). Since 2005 there have been more than 100 million copies of the game installed on cell phones alone.

10. Defense gp. NATO
The North Atlantic Treaty Organization (NATO) was founded not long after WWII in 1949 and is headquartered in Brussels, Belgium. The first NATO Secretary General was Lord Ismay, Winston Churchill’s chief military assistant during WWII. Famously, Lord Ismay said the goal of NATO was “to keep the Russians out, the Americans in, and the Germans down.”

11. Passing thoughts? OBITS
“Obituary” comes from the Latin “obituaris”, originally the record of the death of a person, although the literal meaning is “pertaining to death”.

23. Morning’s end NOON
Our word “noon”, meaning “midday”, comes from the Latin “nona hora” that translates as “ninth hour”. Back in Ancient Rome, the “ninth hour” was three in the afternoon. Over the centuries, traditions such as church prayers and “midday” meals shifted from 3 p.m. to 12 p.m., and so “noon” became understood as 12 noon.

24. Orbit, for one GUM
Orbit is a sugarless gum made by Wrigley’s. Orbit was first introduced during WWII, but was taken off the shelves in the 1980s when there was a concern that the gum’s sweetener was carcinogenic. Orbit was relaunched in 2001.

26. Oscars org. AMPAS
The Academy of Motion Picture Arts and Sciences (AMPAS) is the organization that gives the annual Academy Awards also known as the “Oscars”. The root of the name “Oscar” is hotly debated, but what is agreed is that the award was officially named “Oscar” in 1939. The first Academy Awards were presented at a brunch in 1929 with an audience of just 29 people. The Awards ceremony is a slightly bigger event these days …

27. Food that’s Italian for “little worms” VERMICELLI
Vermicelli is a pasta that is similar to spaghetti, except that it is thicker. “Vermicelli” translates from Italian as “little worms”.

29. Former fliers SSTS
The most famous Supersonic Transport (SST) was the Concorde, a plane that’s no longer flying. Concorde had that famous “droop nose”. The nose was moved to the horizontal position during flight to create the optimum aerodynamic shape thereby reducing drag. It was lowered during taxi, takeoff and landing, so that the pilot had better visibility. The need for the droop nose was driven largely by the delta-shaped wings. The delta wing necessitates a higher angle of attack at takeoff and landing than conventional wing designs, so the pilot needed the nose lowered so that he or she could see the ground.

47. Orange Muppet ERNIE
I’ve always believed that the “Sesame Street” characters Bert and Ernie were named after two roles played in the Christmas classic “It’s a Wonderful Life”. In the movie, the policeman’s name is Bert and his taxi-driving buddy is named Ernie. However, the “Sesame Street” folks have stated that the use of the same names is just a coincidence.

49. Matt who scored the Jets only touchdown in Super Bowl III SNELL
Matt Snell is a retired footballer who played with the New York Jets from 1964 to 1972. Soon after retiring from the game, Snell appeared in the first TV commercial for Miller Lite beer.

53. World Golf Hall of Famer Aoki ISAO
Isao Aoki is one of Japan’s greatest golfers, now playing on the senior circuit. Aoki’s best finish in a major tournament was runner-up to Jack Nicklaus in the 1980 US Open.

54. Movie pooch TOTO
Toto is Dorothy’s dog in the film “The Wizard of Oz”. Toto was played by a dog called Terry, but Terry’s name was soon changed to Toto in real life, due to the success of the film.

56. Zaire’s Mobutu __ Seko SESE
Mobutu Sese Seko was the longtime President of Zaire (later to be called the Democratic Republic of the Congo). Mobutu was known to be a very corrupt dictator and it is believed that he embezzled over $5 billion from his country. On a lighter note, Mobutu was the money man behind the famous 1974 boxing match between Muhammad Ali and George Foreman known as “The Rumble in the Jungle”. Mobutu was anxious to expand the image of Zaire so he used his nation’s funds to entice the fighters to have a go at each other in his homeland.