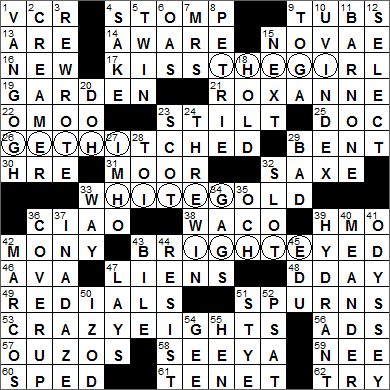 CROSSWORD SETTER: Robyn Weintraub
THEME: Crazy Eights … each of today’s themed answers contains the letters EIGHT in a CRAZY order. The CRAZY EIGHTS are shown by the circled letters in my grid:

17A. Oscar-nominated song from “The Little Mermaid” KISS THE GIRL
26A. Tie the knot GET HITCHED
33A. Jewelry alloy WHITE GOLD
43A. Alertly eager BRIGHT-EYED
53A. Card game that literally explains this puzzle’s circles CRAZY EIGHTS

15. Blazing stars NOVAE
A nova is basically a star that suddenly gets much brighter, gradually returning to its original state weeks or even years later. The increased brightness of a nova is due to increased nuclear activity causing the star to pick up extra hydrogen from a neighboring celestial body. A supernova is very different from a nova. A supernova is a very bright burst of light and energy created when most of the material in a star explodes. The bright burst of a supernova is very short-lived compared to the sustained brightness of a nova.

16. Word in four state names NEW
They would be:

22. Melville novel OMOO
Herman Melville mined his own experiences when writing his novels. Melville sailed from New Bedford, Massachusetts in 1841 on a whaler heading into the Pacific Ocean (a source for “Moby Dick”). Melville ended up deserting his ship 18 months later and lived with natives on a South Pacific Island for three weeks (a source for “Typee”). He picked up another whaler and headed for Hawaii, where he joined the crew of a US navy frigate that was bound for Boston (a source for “Omoo”).

25. Friend of Wyatt DOC
The famous gunslinger Doc Holliday was from Georgia, and received the degree of Doctor of Dental Surgery in Philadelphia. Holliday moved to the Southwest after he contracted tuberculosis, in the hope that the climate might be good for his health. He first settled in Dallas, where he soon discovered that he could make a better living gambling than by running a dental practice. It was while gambling in saloons that Holliday got involved in gunfights and built a reputation as a gunslinger. The most famous shootout in which he was involved was the Gunfight at the OK Corral in Tombstone, Arizona when he fought alongside the Earp brothers. Holliday survived his many gunfights, but eventually succumbed to the disease in his lungs. He died in Glenwood Springs, Colorado at the age of 36.

30. Charlemagne’s domain: Abbr. HRE
Pepin the Short (aka Pepin the Younger, Pepin III) was Duke of the Franks from 751 to 768. Pepin expanded the Frankish Empire and then law dictated that he had to leave the Empire divided between his two sons, Carloman I and Charlemagne. Carloman I was given lands that were centered around Paris, and Charlemagne was given lands that completely surrounded his brothers territory. So it fell to Charlemagne to defend and extend the borders of the empire. It is because of this division of power that it’s Charlemagne who we read about today, not Carloman I. It was Emperor Charlemagne who in effect founded the Holy Roman Empire (HRE).

31. Peaty land MOOR
When dead plant matter accumulates in marshy areas, it may not fully decay due to a lack of oxygen or acidic conditions. We are familiar with this in Ireland, because this decaying matter can form peat, and we have lots and lots of peat bogs.

32. __-Coburg, Bavaria SAXE
Saxony was the name given at different times in history to states along the Elbe river in central Europe. As the various states broke up, they spawned many duchies that retained the name “Saxe”. The most famous of these duchies was probably Saxe-Coburg and Gotha, two united duchies in Germany that ceased to exist after WWII. A notable branch of the Saxe-Coburg and Gotha House is the British Royal Family, as Queen Victoria was married to Prince Albert of Saxe-Coburg and Gotha. King George V of the United Kingdom changed the name of the family to the House of Windsor in a politically sensible move during WWI.

33. Jewelry alloy WHITE GOLD
“White gold” is an alloy, made from gold and a white metal. Typically, that white metal is nickel, manganese or palladium.

38. City NNE of Austin WACO
In recent years, the city of Waco, Texas is perhaps most famous as the site of a siege and shootout between ATF agents and members of the Protestant sect known as the Branch Davidians. Shortly after ATF agents tried to execute a search warrant, shots were fired and at the end of the fight six people inside the Branch Davidian compound were dead, as were four agents. A fifty-day siege ensued at the end of which a final assault resulted in members of the community setting fire to the compound. Only nine people walked away from that fire. 50 adults and 25 children perished.

42. Half of a Billy Idol #1 song MONY
“Mony Mony” was a hit for Tommy James and Shondells back in 1968. Billy Idol came out with a successful cover version of the song in 1987. The title of the song apparently was inspired by a MONY sign on the Mutual of New York (MONY) Building in Manhattan.

Billy Idol is an English rock musician, whose real name is William Broad. He started out with the punk band Generation X, and then made it big as a solo artist, helped along by some well received MTV music videos, in the early days of the genre.

46. Gardner of film AVA
Ava Gardner is noted for her association with some big movies, but also for her association with some big names when it came to the men in her life. In the world of film, she appeared in the likes of “Mogambo” (1953), “On the Beach” (1959), “The Night of the Iguana” (1964) and “Earthquake” (1974). The men in her life included husbands Mickey Rooney, Artie Shaw and Frank Sinatra. After her marriages had failed (and perhaps before!) she had long term relationships with Howard Hughes and bullfighter Luis Miguel Dominguin whom she met through her friend Ernest Hemingway.

47. Debt securities LIENS
A lien is the right that one has to retain or secure someone’s property until a debt is paid. When an individual takes out a car loan, for example, the lending bank is usually a lien holder. The bank releases the lien on the car when the loan is paid in full.

48. Invasion time D-DAY
The most famous D-Day in history was June 6, 1944, the date of the Normandy landings in WWII. The term “D-Day” is used by the military to designate the day on which a combat operations are to be launched, especially when the actual date has yet to be determined. What D stands for seems to have been lost in the mists of time although the tradition is that D just stands for “Day”. In fact, the French have a similar term, “Jour J” (Day J), with a similar meaning. We also use H-Hour to denote the hour the attack is to commence.

53. Card game that literally explains this puzzle’s circles CRAZY EIGHTS
The card game called Crazy Eights is named for the former military designation “Section 8”. Section 8 referred to a category of discharge from the US military, reserved for personnel deemed mentally unfit for duty.

56. Super Bowl highlights ADS
The Super Bowl is used for high-profile advertising because of the high viewership numbers. For example, Super Bowl XLV (2011) had an average audience of 111 million viewers, making it the most-watched American TV program in history.

57. Anise-flavored liqueurs OUZOS
Ouzo is an aperitif from Greece that is colorless and flavored with anise. Ouzo is similar to pastis from France and also has a flavor like sambuca from Italy.

59. Originally named NEE
“Née” is the French word for “born” when referring to a female. The male equivalent is “né”.

Down
1. “The Starry Night” painter VAN GOGH
“The Starry Night” is a Van Gogh masterpiece depicting what the artist could see from the window of his room in a sanitarium near the village of Saint-Rémy-de-Provence. I am somewhat ashamed to note that one reason I know this painting so well is that I put together a 2,000-piece jigsaw puzzle last Christmas depicting “The Starry Night”.

4. Japanese libation SAKE
We refer to the Japanese alcoholic beverage made from rice as “sake”. We’ve gotten things a bit mixed up in the West. “Sake” is actually the word that the Japanese use for all alcoholic drinks. What we know as sake, we sometimes refer to as “rice wine”. It is indeed made from rice, but it is a brewed rather than fermented and so is more like a beer than a wine.

6. Defense gp. since 1948 OAS
The Organization of American States (OAS) has its headquarters in Washington, D.C. All the independent states in the Americas are members of the group except Honduras, which had its membership suspended after the country’s 2009 coup.

7. Dash of flavor? MRS
Mrs. Dash is a brand name of seasoning mixes.

8. Van Dyke role PETRIE
“The Dick Van Dyke Show” is a sitcom that ran from 1961 to 1966 starring Dick Van Dyke and Mary Tyler Moore as Rob and Laura Petrie. This classic show was created by the great Carl Reiner, who also had a supporting role on the screen.

9. Forum garb TOGA
In Ancient Rome the classical attire known as a toga (plural “togae”) was usually worn over a tunic. The tunic was made from linen, and the toga itself was a piece of cloth about twenty feet long made from wool. The toga could only be worn by men, and only if those men were Roman citizens. The female equivalent of the toga was called a “stola”.

10. Measure discussed on the EPA’s SunWise web page UV INDEX
The UV Index is a measure of the strength of ultraviolet radiation at a particular location and on a particular day.

20. Word from Homer D’OH!
“The Simpsons” is one of the most successful programs produced by the Fox Broadcasting Company. Homer Simpson’s catchphrase is “D’oh!”, which became such a famous exclamation that it has been included in the Oxford English Dictionary (OED) since 2001. “D’oh!” can be translated as “I should have thought of that!”

23. Glasgow native SCOT
Glasgow is the largest city in Scotland and sits on the River Clyde. Back in the Victorian Era, Glasgow earned a reputation for excellence in shipbuilding and was known as “Second City of the British Empire”. Glasgow shipyards were the birthplaces of such famous vessels as the Lusitania, the Queen Mary and the Queen Elizabeth.

27. Texter’s “Here’s what I think” IMHO
In my humble opinion (IMHO)

28. Paris pronoun TOI
In French, the pronouns “toi” and “vous” both mean “you”, with the former being used with family and friends, and children. “Vous” is more formal, and is also the plural form of “toi”.

41. Post-Trojan War epic ODYSSEY
“The Odyssey” is one of two epic poems from ancient Greece that is attributed to Homer. “The Odyssey” is largely a sequel to Homer’s other epic, “The Iliad”. “The Odyssey” centers on the heroic figure Odysseus, and his adventures on his journey home to Greece following the fall of Troy.

42. Former Philippine president MARCOS
Ferdinand Marcos served as President of the Philippines from 1965 until 1986, when he was forced to flee the country in the face of a popular revolt. Marcos, and his infamous wife Imelda, were known for their excesses and corruption. Ferdinand Marcos died in exile in Honolulu in 1989.

50. Name on a sport shirt label IZOD
Jack Izod was a tailor of some repute over in England, producing shirts for King George V as well as other members of the Royal Family. As Izod was about to retire, he was approached for the use of his name by an American clothing manufacturer based in New York. The brand Izod of London was introduced to America in 1938.