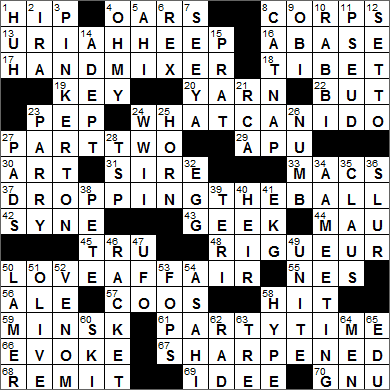 CROSSWORD SETTER: Gareth Bain
THEME: Party Time … each of the themed answers ends with a synonym of PARTY:

61A. Wayne’s World catchphrase, and a hint to the end of the answers to starred clues PARTY TIME!

17A. *Lightweight kitchen appliance HAND MIXER
24A. *”Let me help” WHAT CAN I DO?
37A. *Not doing one’s job DROPPING THE BALL
50A. *Romance LOVE AFFAIR

Today’s Wiki-est, Amazonian Googlies
Across
1. “__ to Be Square”: Huey Lewis & the News hit HIP
Huey Lewis and the News are a local band out here in the Bay Area, based in San Francisco. When the movie “Ghostbusters” came out in 1984, the band sued Ray Parker, Jr. who wrote the film’s theme song, claiming that it was very similar to their own song “I Want a New Drug”. The case was settled out of court, and the following year “Huey Lewis and the News” made the most of an opportunity to write a movie theme themselves. Their smash hit “The Power of Love” was written for “Back to the Future”, and propelled the band into stardom.

18. Himalayan region TIBET
Tibet is a plateau region that is part of China, and is located northeast of the Himalayas. Tibet declared its independence from China in 1913, but fell back under Chinese control after the Invasion of Tibet in 1951. The Tibetan leader, the 14th Dalai Lama, fled the country during the 1959 Tibetan Rebellion. Since then, he has led the Tibetan government-in-exile in Dharamsala, India.

The magnificent Himalaya range of mountains in Asia takes its name from the Sanskrit for “abode of snow”. Geographically, the Himalayas separate the Indian subcontinent from the Tibetan Plateau to the north.

29. “The Simpsons” shop owner APU
The fictional Kwik-E-Mart store is operated by Apu Nahasapeemapetilon on “The Simpsons” TV show. Apu is married to Manjula, and the couple have eight children. The convenience store owner doesn’t seem to be making much use of his Ph.D in computer science that he earned in the US. Apu’s undergraduate degree is from Caltech (the Calcutta Technical Institute), where he graduated top of his class of seven million students …

33. Brits’ raincoats MACS
When I was growing up in Ireland, we had to take our “macs” to school in case it rained (and it usually did!). “Mac” is short for “Macintosh”, a waterproof raincoat made of rubberized fabric. The coat was named after its inventor, Scotsman Charles Macintosh.

42. Since, in a seasonal song SYNE
The song “Auld Lang Syne” is a staple at New Year’s Eve, the words of which were written by Scottish poet Robbie Burns. The literal translation of “Auld Lang Syne” is “old long since”, but is better translated as “old times”. The sentiment of the song is “for old time’s sake”.

43. Nerd GEEK
The original “geek” was a sideshow performer, perhaps at a circus. We use the term today for someone regarded as foolish or clumsy, but also for someone who is technically driven and expert, but socially inept.

44. When repeated, a Kenyan rebel MAU
The Mau Mau Uprising was a revolt against British rule in Kenya that took place in the fifties. The group staging the revolt called themselves the Kenya Land and Freedom Army. Apparently for some long forgotten reason, the rebels became known as the Mau Mau.

45. Play about Capote TRU
“Tru” was written by Jay Presson Allen and is a play about Truman Capote that premiered in 1989. There is a classic anachronism in the piece. It is set in Capote’s New York City apartment at Christmas 1975. At one point the Capote character talks about suicide, saying that he has enough pills to stage his own Jonestown Massacre. The Jonestown Massacre didn’t happen until three years later, in 1978.

48. De __: strictly proper RIGUEUR
We use the French term “de rigueur” to refer to a rigorous style of manner.

55. Game console letters NES
The Nintendo Entertainment System (NES) was sold in North America from 1985 to to 1995. The NES was the biggest selling gaming console of the era.

59. Capital of Belarus MINSK
Minsk is the capital of Belarus, formerly known as the Belorussian Soviet Socialist Republic. One of Minsk’s more infamous residents was Lee Harvey Oswald who lived there from 1960 to 1962.

61. Wayne’s World catchphrase, and a hint to the end of the answers to starred clues PARTY TIME!
“Wayne’s World” was originally a Saturday Night Live sketch starring Mike Myers (as Wayne) and Dana Carvey. The sketch was so successful that it was parlayed into two hit movies, released in 1992 and 1993. Not my cup of tea though …

70. African antelope GNU
A gnu is also known as a wildebeest, and is an antelope native to Africa. “Wildebeest” is actually the Dutch word for “wild beast”.

3. Eponymous detective agency founder PINKERTON
The Pinkerton National Detective Agency was founded in 1850 by Scottish American detective and spy Allan Pinkerton. Apparently, in the late 19th century, Pinkerton had more agents than the US Army had soldiers.

5. Sashimi tuna AHI
“Sashimi” is thinly sliced raw fish, although it can also be raw meat. The word “sashimi” translates literally as “pierced body”, which may be a reference to the practice of sticking the tail and fin to sliced fish to identify it.

6. T. __ REX
The Tyrannosaurus rex (usually written T. rex) was a spectacular looking dinosaur. “Tyrannosaurus” comes from the Greek words “tyrannos” (tyrant) and “sauros” (lizard), and the “rex” is of course Latin for “king”. They were big boys, measuring 42 feet long and 13 feet tall at the hips, and weighing 7.5 tons.

8. Forty winks CATNAP
Back in the early 1800s, folks took “nine winks” when getting a few minutes of sleep during the day. Dr. William Kitchiner extended this concept in his 1821 self-help book “The Art of Invigorating and Prolonging Life”. He suggested “A Forty Winks Nap”, which we seem to have been taking ever since. Mind you, I’m up to about eighty winks most days …

9. Geisha circler OBI
The sash worn as part of traditional Japanese dress is known as an obi. The obi can be tied in what is called a butterfly knot.

10. Torah teacher RABBI
The word “Torah” best translates as “teaching”, I am told.

15. Backside, slangily PRAT
“Prat” is a relatively new word for me, a slang term for the buttocks apparently. A “prat-fall” is when someone falls and lands on the buttocks.

24. Battle of the Bulge conflict, briefly WWII
The Ardennes Offensive of WWII is better known as the Battle of the Bulge. The “Bulge” name was coined by the American press, citing the “bulge” in the Allied front lines where the battle took place. US forces suffered more casualties in this engagement than in they did any other battle in the whole war.

25. French __ HORN
The brass instrument known as a horn is sometimes informally called a “French horn”. But, the French horn isn’t French at all, and originated in Germany. Very confusing …

34. First-name-only gathering AA MEETING
Alcoholics Anonymous (AA) was founded in 1935, by Bill Wilson and Dr. Bob Smith in Akron, Ohio. As the organization grew, the guiding principles established by the founders were formatted into a 12-step program that was in place by the forties.

35. Santa __ CLAUS
Saint Nicholas of Myra is the inspiration for Santa Claus. Nicholas was the Bishop of Myra (now in modern-day Turkey) during the 4th century AD, and was known for being generous to the poor. Centuries after he died, his remains were desecrated by Italian sailors and moved to Bari in Italy. One legend has it that the relics were moved again centuries later and reburied in the grounds of Jerpoint Abbey in Co. Kilkenny in Ireland, where you can visit the grave today. I choose to believe that Santa Claus’s relics are indeed buried in Ireland …

38. Tennis great Sampras PETE
Pete Sampras is a retired Greek-American tennis professional. Sampras was rated number one in the world rankings for six years in a row in the nineties.

39. Actress Hatcher TERI
Teri Hatcher’s most famous role these days is the Susan Mayer character in “Desperate Housewives”. I’ve never seen more than a few minutes of “Housewives” but I do know Teri Hatcher as a Bond girl, as she appeared in “Tomorrow Never Dies”.

40. Will beneficiary HEIR
“Will” is an Old English word meaning “wish, desire, determination”. In the 14th century, we started using “will” for a written document laying out a person’s “wishes” for the disposition of property after death.

41. Pre-op test EKG
An EKG measures electrical activity in the heart. Back in my homeland of Ireland, an EKG is known as an ECG (for electrocardiogram). We use the German name in the US, Elektrokardiogramm, giving us EKG. Apparently the abbreviation EKG is preferred as ECG might be confused (if poorly handwritten, I guess) with EEG, the abbreviation for an electroencephalogram.

47. What a weather balloon may be mistaken for, briefly UFO
The Roswell UFO Incident took place in 1947. Some people believe that an extraterrestrial spacecraft crashed, with aliens aboard. After the initial reports the public accepted the US Military’s explanation of the crash, that the debris recovered belonged to an experimental high-altitude surveillance balloon. The whole incident was dug up again over 30 years later when a claim was made that there was a cover-up in 1947, and that the armed forces had recovered an alien craft and brought it to Roswell Army Air Field. “The National Enquirer” ran the story, and it has been running ever since.

52. Stingray secretion VENOM
Stingrays rarely cause the death of a human with their venomous sting. One famous exception is the fatal sting inflicted on Australian wildlife expert Steve Irwin. That stingray stuck Irwin several hundred time in just a few seconds using its tail spine. Death was a result of a piercing of the heart.

54. Beer brand from Tokyo ASAHI
Asahi is a beer, and the name of the brewery that produces it. “Asahi” is Japanese for “morning sun”. Asahi introduced a “dry beer” in 1987, igniting a craze that rocketed the brewery to the number one spot in terms of beer production in Japan, with Sapporo close behind.

60. Deal with moguls SKI
Moguls are the series of bumps in the surface of snow that arise naturally as a succession of skiers make turns on a slope.

65. Kin of gov EDU
The .edu domain was one of the six original generic top-level domains specified. The complete original list is: