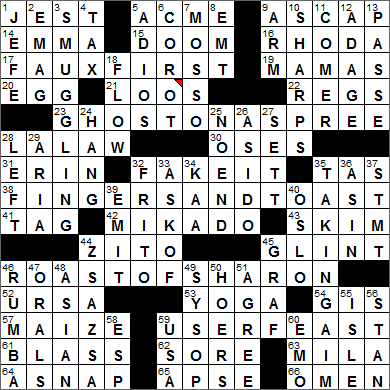 CROSSWORD SETTER: Joseph Groat
THEME: Add T-Sound … each of today’s themed answers sounds like a common phrase, but with an S-sound change to a ST-sound:

17A. Cheater’s victory? FAUX FIRST (from “faux furs”)
23A. Haunted house nightmare? GHOST ON A SPREE (from “goes on a spree”)
38A. Chicken strips on browned bread? FINGERS AND TOAST (from “fingers and toes”)
46A. Facetious tribute for Hollywood’s Stone? ROAST OF SHARON (from “Rose of Sharon”)
59A. Big dinner for the tech staff? USER FEAST (from “user fees”)

Today’s Wiki-est, Amazonian Googlies
Across
5. Top ACME
The “acme” is the highest point, coming from the Greek word “akme” which has the same meaning.

9. Org. with an eighth note in its logo ASCAP
ASCAP (the American Society of Composers, Authors and Publishers) collects licence fees for musicians and distributes royalties to composers whose works have been performed. BMI (Broadcast Music Incorporated) provides the same service.

14. Title matchmaker of 19th-century literature EMMA
I listened to one of my favorite Jane Austen novels on Audio Book not so long ago. “Emma” is the tale of Emma Woodhouse and the wonderful George Knightley. At the end of the story, Emma marries Knightley and her young friend Harriet marries Robert Martin, who had been trying to get Harriet’s attention practically from page one of the novel!

16. Daughter of Martin and Ida, in ’70s TV RHODA
The seventies sitcom “Rhoda” was a spinoff of “The Mary Tyler Moore Show” that starred Valerie Harper. The eighth episode of the show was an hour-long special in which Rhoda married her fiance Joe (played by David Groh). At the time of airing it was the second-most watched television episode in history, second only to the 1953 birth of Little Ricky on “I Love Lucy”.

19. Half a ’60s quartet MAMAS
A folk group called the Magic Circle renamed itself to the Mamas and the Papas in the early sixties. Sadly, the Mamas and the Papas weren’t a happy bunch, always fighting over who was getting credit for songs and whose voice was getting mixed out of recordings, so they split up, twice. While they were together though, they wrote and recorded some great songs, songs which really do epitomize the sound of the sixties. “Monday, Monday” was written by John Phillips, one of “the Papas”, and it was to become the only number one hit for the group. Here’s a shocker … when it hit number one in 1966, it was the first time that a group made up of both sexes topped the American charts!

28. Nine of its cast members received Emmy nominations for 1988-89 LA LAW
“L.A. Law” ran on NBC from 1986 to 1994, and was one of the network’s most successful drama series. It took over from the equally successful “Hill Street Blues” in the Thursday night 10 p.m. slot until, after a six-year run, it was itself replaced by yet another respected drama, “E.R.” The opening credits showed that famous California licence plate. The plate was on a Jaguar XJ for most of the series, but moved onto a Bentley towards the end of the run. For each series the registration sticker was updated, so no laws were being broken.

31. Sean O’Casey’s home ERIN
Seán O’Casey was an Irish playwright noted for his works exploring the plight of the working class in Dublin. O’Casey’s most famous works are “Juno and the Paycock” and “The Plough and the Stars”.

42. 1885 Savoy Theatre premiere, with “The” MIKADO
“The Mikado” is a wonderful comic opera by Gilbert and Sullivan, set in the exotic location of Japan. “Mikado” is a former term for the “Emperor of Japan”. In the story, Nanki-Poo is the Mikado’s son, who falls in love with Yum-Yum.

44. 2002 A.L. Cy Young Award winner Barry ZITO
Barry Zito is a professional baseball pitcher with the Oakland Athletics, who formerly turned out for the San Francisco Giants. Barry’s father was Joe Zito, who arranged music for Nat King Cole in the sixties. Barry also composes music and co-wrote a song that was used in an Eddie Murphy film. Barry’s uncle is the actor Patrick Duffy, who played Bobby Ewing in “Dallas”.

Rose of Sharon is a name given to several species of flowering plants.

52. __ Minor URSA
Ursa Minor (Latin for “Smaller Bear”) sits right beside the constellation Draco (Latin for “dragon”). Ursa Minor used to be considered the wing of Draco, and so was once called “Dragon’s Wing”.

53. Practice with poses YOGA
“Asana” is a Sanskrit word literally meaning “sitting down”. The asanas are the poses that a practitioner of yoga assumes. The most famous is the lotus position, the cross-legged pose called “padmasana”.

61. Pucci contemporary BLASS
Bill Blass was a fashion designer from Fort Wayne, Indiana. Blass volunteered for the US Army during WWII. He had a very creative role in the military, working for the 603rd Camouflage Battalion. The unit’s job was to fool the Germans into thinking Allied troops were in fake locations. Blass worked with the battalion in support of the Battle of the Bulge, the crossing of the Rhine river and the North African campaign.

Emilio Pucci was an Italian fashion designer from Florence. Pucci served as a torpedo bomber pilot during WWII for the Italian Air Force.

63. Kunis of “Black Swan” MILA
Mila Kunis is a Ukrainian-born, American actress, who plays Jackie Burkhart on “That ’70s Show”. Fans of the cartoon series “Family Guy” might recognize her voicing the Meg Griffin character. In ”Black Swan”, Kunis plays a rival ballet dancer to the character played by Natalie Portman. In her personal life, Kunis dated Macaulay Culkin for 8 years.

65. It adjoins the altar APSE
The apse of a church or cathedral is a semicircular recess in an outer wall, usually with a half-dome as a roof and often where there resides an altar. Originally apses were used as burial places for the clergy and also for storage of important relics.

2. Kindle download E-MAG
I bought myself a Kindle Fire HD not that long ago. I’ve started reading e-books for the first time in my life, as well as enjoying other computing options available with the tablet device. I love it …

3. Coast Guard concern SMUGGLING
The US Coast Guard (USCG) has the distinction of being the country’s oldest continuous seagoing service. The USCG was founded as the Revenue Cutter Service by Alexander Hamilton in 1790.

5. Parting word ADIOS
The term “adios” is Spanish for “goodbye”. In the Spanish language, “adios” comes from the phrase “a dios vos acomiendo” meaning “I commend you to God”.

6. Barbizon school artist COROT
Jean-Baptiste-Camille Corot was a French painter mainly noted for his landscapes, working just before the birth of the Impressionist movement. His lovely painting “The Bridge at Narni” from 1826 can be seen at the Musée du Louvre in Paris.

The Barbizon school of painters took their name from the village of Barbizon in north-central France near the Fontainebleau Forest, where many of the painters lived. The school created mainly landscapes and paintings depicting peasant life. Leaders of the movement were Théodore Rousseau, Jean-François Millet, and Charles-François Daubigny.

7. Meno __: not as fast, in music MOSSO
Meno Mosso is a musical term, meaning that the music should be played at a reduced speed. “Meno mosso” is Italian for “less agitated”.

13. Not at all current PASSE
“Passé” is a French word, meaning “past, faded”.

27. Paving stone SETT
A sett is a small rectangular paving stone with a rounded top used to make a road surface. It’s like a cobblestone, I think …

32. Ruffle relative? FRITO
The Frito Corporation was started in 1932 by Elmer Doolin, basically in his mother’s kitchen. Doolin paid $100 for a corn chip recipe from a local restaurant and started producing Fritos at the rate of 10 pounds per day.

Ruffles are a brand of crinkle-cut potato chips. The chips take their name from their “ruffled” shape. The ruffles are designed to make the chip more sturdy, and better for dipping.

“The Jungle Book” by Rudyard Kipling was originally published in 1894, and is a collection of adventure stories or fables featuring the animals of the jungle and a young boy called Mowgli. Baloo is a sloth bear who teaches the cubs of a wolf pack the Law of the Jungle. His most challenging pupil however is no lupine, but rather the man-cub Mowgli.

40. City where sidewalks are decorated with Ibsen quotes OSLO
The Ibsen Quotes project is a work of art completed in 2008. It consists of 69 quotations by the playwright Henrik Ibsen that are written in stainless steel and set into the granite of the city’s sidewalks.

Henrik Ibsen was a Norwegian playwright, considered by many to be the greatest playwright since William Shakespeare. Ibsen was famous for shocking his audiences by exploring subjects that offended the sensibilities of the day (the late 1800s).

44. “Moulin Rouge” (1952) co-star, familiarly ZSA ZSA
Zsa Zsa Gabor is a Hungarian American actress, born in Budapest as Sári Gábor (the older sister of the actress Eva). Zsa Zsa Gabor has been married a whopping nine times, including a 5-year stint with Conrad Hilton and another 5 years with the actor George Sanders. One of Gabor’s famous quips was that she was always a good housekeeper, as after every divorce she kept the house!

“Moulin Rouge” is a 1952 film that tells the story of French artist Henri de Toulouse-Lautrec. Directed by John Huston, the movie stars José Ferrer as the artist and Jane Avril as a can-can dancer who becomes a subject for some of his artworks.

45. Five-time US Open champ GRAF
Steffi Graf is a former World No. 1 professional tennis player from Germany. Graf won 22 Grand Slam singles titles, more than any other man or woman other than Margaret Court. She is married to another former World No. 1, namely Andre Agassi.

46. Latin dance RUMBA
The rumba is a Cuban dance, with influences brought by African slaves and Spanish colonists. The name “rumba” comes from “rumbo”, the Spanish word for “party, spree”.

48. Turk, most likely ASIAN
Turkey is a country that straddles the border between the continents of Europe and Asia. Even though most of Turkey lies geographically in Asia, in recent decades the country has been strengthening its ties with its European neighbors. Turkey is a member of NATO and is well on the way to becoming a member of the European Union.

56. Baseball Hall of Famer Musial STAN
Stan Musial is a retired baseball player who went by the nickname “Stan the Man”, a moniker he was awarded by the Brooklyn Dodgers fans in 1946. Apparently, off the field Stan is quite the harmonica player.

59. Westminster Kennel Club Dog Show network USA
The USA Network cable television channel has been around since 1971. Back in 1971 it was called the Madison Square Garden Network, becoming USA in 1979.

The first Westminster Kennel Club Dog Show was held in 1877, which makes it the second oldest sporting event in the country (narrowly beaten out by the Kentucky Derby, first run in 1875). The show was originally limited to gun dogs and was established by a group of hunters who routinely met at the Westminster Hotel in Manhattan, New York.

60. Confessional genre EMO
The musical genre of “emo” originated in Washington D.C. in the 80s, and takes its name from “emotional hardcore”. Not my cup of tea …