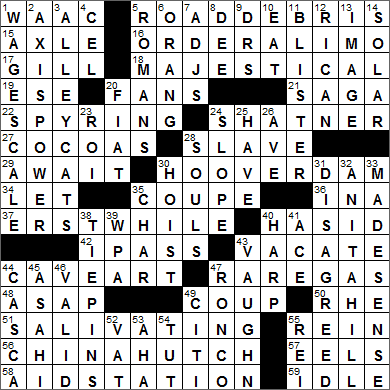 Today’s Wiki-est, Amazonian Googlies
Across
1. WWII support gp. WAAC
The Women’s Army Auxiliary Corps (WAAC) was formed in 1942, and the unit was converted to full status the following year to become the Women’s Army Corps (WAC). Famously, General Douglas MacArthur referred to the WACs as his “best soldiers”, saying they worked harder, complained less and were better disciplined than men. The WACs were disbanded in 1978 and the serving members were integrated into the rest of the army.

15. Linchpin location AXLE
A linchpin is a clip or fastener that is used on the end of an axle to prevent a wheel from sliding off. The term is also used figuratively to describe anything that is a vital element in a system.

16. Wedding to-do list item ORDER A LIMO
The word “limousine” actually derives from the French city of Limoges. The area around Limoges is called the Limousin, and it gave its name to a cloak hood worn by local shepherds. In early motor cars, a driver would sit outside in the weather while the passengers would sit in the covered compartment. The driver would often wear a limousin-style protective hood, giving rise to that type of transportation being called a “limousine”. Well, that’s how the story goes anyway …

17. 2007 Country Music Hall of Fame inductee GILL
Vince Gill is a country music singer-songwriter. Gill has been honored with 20 Grammy Awards, which is more than any other male country singer.

19. Jargon ending -ESE
“Jargon” can mean nonsensical and meaningless talk, or the specialized language of a particular group, trade or profession. The term is Old French, with the more usual meaning of “a chattering”. How apt …

20. Buffs FANS
A “buff” or a “nut” is one who is extremely enthusiastic and knowledgeable about a subject.

24. Actor/director with two Emmys and two Razzies SHATNER
William Shatner is a Canadian actor, famous for playing Captain James T. Kirk in the original “Star Trek” television series. Shatner was trained as a classical Shakespearean actor, and appeared on stage in many of the Bard’s works early in his career. While playing the Kirk character, he developed a reputation for over-acting, really emphasizing some words in a speech and using an excessive number of pauses. He gave his name to a word “shatneresque”, which describes such a style.

Razzie is the familiar name for the Golden Raspberry Award, an award presented annually for the worst in the world of film. The Razzies have been presented on the day before the Oscars since 1981.

27. Winter warmers COCOAS
The beverages hot cocoa and hot chocolate differ from each other in that the latter contains cocoa butter, whereas the former does not.

30. 1935 FDR dedication HOOVER DAM
When the magnificent Hoover Dam was completed in 1936 it was the largest hydroelectric plant in the world, as well as being the world’s largest concrete structure. The dam is named after Herbert Hoover for his role in having the dam built when he was Secretary of Commerce, and his later support as US President. There was a formal dedication ceremony held in September 1935 when President Franklin D. Roosevelt was in the area, when only work on the powerhouse was incomplete. President Roosevelt managed to make his dedication speech without once referring to the name of his former opponent President Hoover. When the dam was finally put into service in 1936, the project was two years ahead of schedule. Those were the days …

34. Net grazer LET
In tennis, a service that grazes the net is judged to be a “let”, and is retaken.

35. Body style COUPE
The type of car known as a “coupe” or “coupé” is a closed automobile with two doors. The name comes from the French word “couper” meaning “to cut”. In most parts of the English-speaking world the pronunciation adheres to the original French, but here in most of North America we go with “coop”. The original coupé was a horse-drawn carriage that was cut (coupé) to eliminate the rear-facing passenger seats. That left just a driver and two front-facing passengers. If the driver was left without a roof and out in the open, then the carriage was known as a “coupé de-ville”.

36. Raised-barn connection IN A
Were you raised in a barn? That would have been luxury for me! 🙂

37. Former ERSTWHILE
Erstwhile means “in the past” or “once upon a time”.

40. Member of a strict Jewish sect HASID
The Hasidic Jewish movement was founded in the 18th century by Baal Shem Tov, a mystical rabbi from Eastern Europe.

47. Xenon, e.g. RARE GAS
The “rare gases” are better known as the noble gases, but neither term is really very accurate. Noble gas might be a better choice though, as they are all relatively nonreactive. But rare they are not. Argon, for example, is a major constituent (1%) of the air that we breathe.

Xenon was the first of the noble gases to be made into a compound, which was somewhat remarkable in that the noble gases were thought by many to be completely inert, nonreactive.

49. Overthrow COUP
A coup d’état (often just “coup”) is the sudden overthrow of a government, and comes from the French for “stroke of state”. The Swiss German word “putsch” is sometimes used instead of “coup”, with “Putsch” translating literally as “sudden blow”.

51. Anticipatory reaction SALIVATING
Ivan Pavlov was studying gastric function in dogs in the 1890s when he observed that his subject dogs started to salivate before he even presented food to them. This “psychic secretion”, as he called it, interested him so much that he changed the direction of his research and studied the reactions of dogs to various stimuli that were associated with the presentation of food. Famously, he discovered that a dog could be conditioned to respond as though he was about to be fed, just by sensing some stimulus that he had come to associate with food. This might be a bell ringing, an electric shock (poor dog!) or perhaps the waving of a hand. Nowadays we might describe someone as “Pavlov’s Dog” if that person responds just the way he/she has been conditioned to respond, rather than applying critical thinking.

55. It pulls a bit REIN
The type of horse tack known as a “bit” is placed in a horse’s mouth and is used to aid communication of instruction from rider to mount. The bit is held in place by means of a bridle around the head, and is controlled by the rider using the attached reins.

Down
2. WWII fighter AXIS POWER
Before WWII, Hungary’s prime minister was lobbying for an alliance between Germany, Hungary and Italy and worked towards such a relationship that he called an “axis”. The main Axis powers during the war were Germany, Italy and Japan. However, also included in the relationship were Romania, Bulgaria and the aforementioned Hungary.

4. “Snow White” collectible CEL
In the world of animation, a cel is a transparent sheet on which objects and characters are drawn. In the first half of the 20th century the sheet was actually made of celluloid, giving the “cel” its name.

“Snow White” is a traditional German fairy tale that was published in 1812 in the collection of the Brothers Grimm. There is also a second, very different Grimms’ Fairy Tale called “Snow-White and Rose-Red”, not to be confused with its more famous cousin.

6. Malaysian native ORANG
Orangutans (also “orangs”) are arboreal creatures, in fact the largest arboreal animals known to man. They are native to Indonesia and Malaysia, living in the rain forests. Like most species in rain forests these days, orangutans are endangered, with only two species surviving. The word “orangutan” is Malay, meaning “man of the forest”.

8. River to Aberdeen DEE
The Scottish city of Aberdeen is located amidst plentiful supplies of granite, which were actively quarried until the 1970s. Many local buildings incorporate the granite in their structure. Aberdeen granite is especially prized for its high levels of mica, which can cause the stone to sparkle like silver.

20. Royal decree FIAT
A “fiat” is an arbitrary rule that is imposed, and is the Latin for “let it be done”.

26. Boston’s Mass __ AVE
Massachusetts Avenue in Boston (and beyond) is known to locals simply as Mass Ave. It was along part of Mass Ave. (then called the Great Road) that Paul Revere made his famous ride in 1775.

32. Witness in 1991 Senate hearings ANITA HILL
Anita Hill is an attorney who is currently a professor at Brandeis University. Hill gained a lot of attention in 1991 when she accused US Supreme Court nominee Clarence Thomas of sexual harassment. Judge Thomas was confirmed anyway. Many say that Hill’s testimony during the confirmation hearings launched public awareness of the issue of sexual harassment in the workplace. Within a year, complaints of harassment were up by fifty percent.

38. Haberdashery supply TIEPINS
Back in the 14th century a haberdasher was a dealer in small wares. By the late 1800s, the term had evolved to mean a purveyor of menswear, and in particular was associated with the sale of hats.

39. Employment org. created in 1935 WPA
The Work Progress Administration (WPA) was the largest of the New Deal agencies. The WPA employed millions of people during the Depression, putting them to work on various public works projects. The total spending through the WPA from 1936 to 1939 was nearly $7 billion. We have to give the federal government credit for taking an enlightened view of what types of project qualified for financial support, so artists who could not get commissions privately were hired by the government itself. The result is a collection of “New Deal Art”, including a series of murals that can be found in post offices around the country to this day.

40. Dwell (on) HARP
“To harp on” something is to talk too much about it. The original expression with the same meaning was “to harp on the same string”, a reference to the musical instrument.

41. It’s not returned ACE
In tennis, an ace is a serve that an opponent fails to hit.

44. “Speak, hands, for me!” speaker CASCA
Julius Caesar was assassinated on the 15th (the ides) of March, 44 BC. He was attacked by a group of sixty people in the Roman Senate, and was stabbed 23 times. The first to strike a blow was Servilius Casca, who attacked Caesar from behind and stabbed him in the neck. In Shakespeare’s “Julius Caesar”, Casca utters the words “Speak, hands, for me!” just before making the fatal blow. The following line, uttered by Caesar, is more famous though: “Et tu, Brute?”

45. Japanese beer brand ASAHI
Asahi is a beer, and the name of the brewery that produces it. “Asahi” is Japanese for “morning sun”. Asahi introduced a “dry beer” in 1987, igniting a craze that rocketed the brewery to the number one spot in terms of beer production in Japan, with Sapporo close behind.

47. “But wait! There’s more!” company RONCO
Ronco is a company the builds and sells products mainly for the kitchen. Over the years the company has been closely associated with the “-O-Matic” suffix, especially the “Veg-O-Matic” vegetable slicer.

49. Bank opening? CITI-
During the global financial crisis of 2008-2009, the US government rescued Citibank by providing loan guarantees and two payments of $25 billion each. It turns out that the government made a tidy profit on that deal, as Citibank has since repaid the loans in full, along with interest.

55. “Get outside yourself” company REI
REI is a sporting goods store, the initialism standing for Recreational Equipment Inc. REI was founded in Seattle by Lloyd and Mary Anderson in 1938 as a cooperative that supplies quality climbing gear to outdoor enthusiasts. The first full-time employee hired by the Andersons was Jim Whittaker, who was the American to climb Mount Everest.