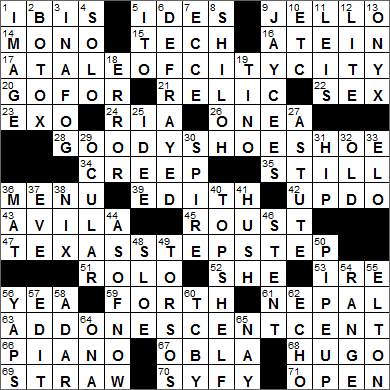 CROSSWORD SETTER: Tom Pepper
THEME: Itemized Phrases … each of today’s themed answers is a common phrase that includes two ITEMS. However, each of those two items has been listed separately, i.e. ITEMIZED:

Today’s Wiki-est, Amazonian Googlies
Across
1. Wading bird in ancient Egyptian art IBIS
The ibis is a wading bird that was revered in ancient Egypt. “Ibis” is an interesting word grammatically speaking. You can have one “ibis” or two “ibises”, and then again one has a flock of “ibis”. And if you want to go with the classical plural, instead of two “ibises” you would have two “ibides”!

5. __ of March IDES
Julius Caesar was assassinated on the 15th (the ides) of March, 44 BC. He was attacked by a group of sixty people in the Roman Senate, and was stabbed 23 times. The first to strike a blow was Servilius Casca, who attacked Caesar from behind and stabbed him in the neck. In Shakespeare’s “Julius Caesar”, Casca utters the words “Speak, hands, for me!” just before making the fatal blow. The following line, uttered by Caesar, is more famous though: “Et tu, Brute?”

9. Dessert “there’s always room for” JELL-O
If you like Jell-O, then you might want to stop by LeRoy, New York where you can visit the only Jell-O museum in the world. While at the museum, you can walk along the Jell-O Brick Road …

14. Like pre-stereo sound MONO
Monophonic sound (“mono”) is sound reproduced using just one audio channel, which is usually played out of just one speaker. Stereophonic sound is reproduced using two audio channels, with the sound from each channel played out of two different speakers. The pair of stereo speakers are usually positioned apart from each other so that sound appears to come from between the two. Quadraphonic sound (4.0 surround sound) uses four audio channels with the sound played back through four speakers often positioned at the corners of the room in which one is listening.

15. Geek Squad pro TECH
Best Buy is a retailer specializing in the supply of consumer electronics. Best Buy services include the famous “Geek Squad”, a band of technical experts that will help solve your computer and other consumer electronic problems.

26. Most fit to be drafted ONE-A
The US government maintains information on all males who are potentially subject to military conscription, using what is called the Selective Service System(SS). In the event that a draft was held, men registered would be classified into groups to determine eligibility for service. Class 1-A registrants are those available for unrestricted military service. Other classes are 1-A-O (conscientious objector available for noncombatant service), 4-A (registrant who has completed military service) and 4-D (Minister of religion).

28. Smugly prudish sort, itemized GOODY SHOE SHOE (goody two shoes)
The expression “goody two-shoes” is used for someone who is virtuous, but in a smug way. The term comes from a nursery tale published in 1765 called “The History of Goody Two-Shoes”. Goody Two-Shoes is the heroine of the tale, and isn’t smug at all. Instead, she is a Cinderella-like character in a retelling of the Cinderella story.

42. Beehive, e.g. UPDO
That distinctive “beehive” hairstyle is also called a B-52, because the round beehive-shape also resembles the bulbous nose of a B-52 bomber! The style originated in 1958 and is credited to Margaret Vinci Heldt, the owner of a hair salon in downtown Chicago. I’m not a fan of the beehive, but I do have to say that Audrey Hepburn carried it off in “Breakfast at Tiffany’s”, as did Dusty Springfield in her heyday.

43. St. Teresa’s home AVILA
Avila is famous for the walled defenses around the old city, which date back to 1090. They were constructed out of brown granite, and are still in excellent repair. There are nine gateways and eighty-towers in all. Even the cathedral built between the 12th and 14th centuries is part of the city’s defenses, so it looks like an imposing fortress.

51. Chocolate-caramel candy brand ROLO
Rolo was a hugely popular chocolate candy in Ireland when I was growing up. Rolo was introduced in the thirties in the UK, and is produced under license in the US by Hershey. I was a little disappointed when I had my first taste of the American version as the center is very hard and chewy. The recipe used on the other side of the Atlantic calls for a soft gooey center.

61. Sherpas’ land NEPAL
In the Tibetan language, Sherpa means “eastern people” (sher = east, pa = people). Sherpas are an ethnic group from Nepal, but the name is also used for the local guides who assist mountaineers in the Himalayas, and particularly on Mount Everest.

66. Yamaha with a bench PIANO
The Japanese company Yamaha started out way back in 1888 as a manufacturer of pianos and reed organs. Even though the company has diversified since then, Yamaha’s logo still reflects it musical roots. Even on Yamaha motorcycles you can see a logo made up of three intersecting tuning forks.

67. Syllables before di or da, in a Beatles song OB-LA-
“Ob-La-Di, Ob-La-Da” was one of many songs credited to Lennon/McCartney that was actually written by just one of the pair. Paul McCartney wrote this one, a song that John Lennon really did not like at all. Apparently Lennon was quite obstructionist during the recording of the song and even walked out at one point.

68. “Les Misérables” novelist HUGO
Victor Hugo’s famous 1862 novel “Les Misérables”, has been translated into English several times. However, the title is usually left in the original French as a successful translation of “les misérables” seems to be elusive. Some suggestions for an English title are “The Wretched”, “The Victims” and “The Dispossessed”.

69. Proverbial backbreaker STRAW
We use the idiom “the straw that broke the camel’s back” to refer to an seemingly inconsequential action that can cause a cataclysmic failure given the pressure on the situation that already exists. Our English idiom comes from an Arabic proverb with a similar wording and meaning.

70. “Ghost Hunters” channel SYFY
Syfy is a cable television that used to be known as “Sci-Fi Channel”, which of course specializes in broadcasting science fiction shows. The brand name “Syfy” was chosen because “Syfy” could be trademarked whereas the generic term “sci-fi” could not.

“Ghost Hunters” is a “reality” show on SyFy starring two Roto-Rooter plumbers who clear drains by day and investigate haunted houses by night.

Down
2. Wrinkle-removing injection BOTOX
Botulinum toxin is produced by the bacterium Clostridium botulinum. The toxin is a protein that can cause botulism, an extremely dangerous illness in humans and animals. Botulinum toxin is sold under the trade name Botox. Botox is used therapeutically and in cosmetic applications to weaken muscles, perhaps muscles that are in uncontrollable spasm. The cosmetic application involves the paralyzing of facial muscles in order to eliminate or reduce wrinkles, at least for a few months.

7. Caesar’s “Behold!” ECCE!
The Roman emperor Nero had quite the family life. When Nero was just 16-years-old he married his stepsister, Claudia Octavia. He also had his mother and step-brother executed.

8. 1862 Tennessee battleground SHILOH
The Battle of Shiloh was a major engagement in the Civil War, fought in 1862 at Pittsburg Landing in southwestern Tennessee. The battle started with a surprise attack by Confederate forces led by Generals Albert Sidney Johnston and P. G. T. Beauregard. The attackers gained the upper hand on the first day, over the Union forces led by Major General Ulysses S. Grant. Union reinforcements arrived during the night and the tide of the battle turned the next day and the Confederates were forced to withdraw. Almost 3,000 men died in the course of the Battle of Shiloh, making it the bloodiest battle in US history up to that point in time.

11. Hawaiian wreaths LEIS
“Lei” is the Hawaiian word for “garland, wreath”, although in more general terms a “lei” is any series of objects strung together as an adornment for the body.

13. Black gemstone ONYX
Onyx is a form of banded quartz that comes in many different shades, but most often it’s the black version that’s used for jewelry. The name “onyx” comes from the Greek word for “fingernail”, as onyx in the flesh color is said to resemble a fingernail.

19. Ex-Yankee Martinez TINO
First baseman Tino Martinez has retired from Major League Baseball. Martinez played for a number of teams including the Mariners, Yankees, Cardinals and Devil Rays. Martinez was born and raised in Tampa, Florida and as a boy he worked in his father’s cigar factory.

31. Joint that may be swiveled HIP
The hip is a ball and socket joint.

33. “Xanadu” rock gp. ELO
The title song of the 1980 movie “Xanadu” was performed by the Electric Light Orchestra (ELO) and Olivia Newton-John (who starred in the film). Despite the popularity of ELO around the world, the song “Xanadu” was the band’s only number one hit back in their homeland of the UK.

36. Pilates class need MAT
Pilates is a physical exercise system developed by, and named for, Joseph Pilates. Pilates introduced his system of exercises in 1883 in Germany.

37. Grandmother of Enos EVE
Enos, as the son of Seth, was the grandson of Adam and Eve.

38. Negative word often spoken in pig Latin NIX
Pig Latin is in effect a game. One takes the first consonant or consonant cluster of an English word and moves it to the end of the word, and then adds the letters “ay”. So the Pig Latin for the word “nix” is “ix-n-ay” … ixnay, and for “scram” is “am-scr-ay”

46. Surgical tube STENT
In the world of medicine and surgery, a stent is an artificial tube inserted inside a vessel in the body, say an artery, so that it reduces the effects of a local restriction in the body’s conduit.

48. Wild plum SLOE
The sloe is the fruit of the blackthorn bush, and the main flavoring ingredient in sloe gin.

49. Upper bodies TORSOS
“Torso” (plural “torsi”) is an Italian word meaning the “trunk of a statue”, and is a term that we imported into English.

58. Jewish month before Nisan ADAR
Nisan is the first month in the Hebrew ecclesiastical calendar, the month in which Passover falls. Adar is the last month in the same calendar.

60. Beriyo smoothie maker TCBY
TCBY is a chain of stores selling frozen yogurt, founded in 1981 in Little Rock, Arkansas. The acronym TCBY originally stood for “This Can’t Be Yogurt”, but this had to be changed due to a lawsuit being pressed by a competitor called “I Can’t Believe It’s Yogurt”. These days TCBY stands for “The Country’s Best Yogurt”.