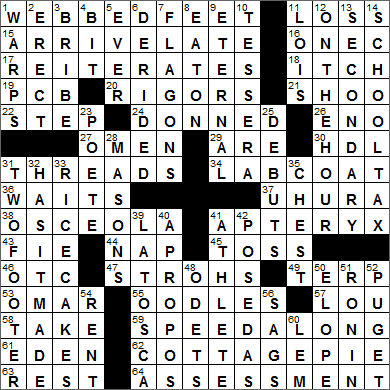 Today’s Wiki-est, Amazonian Googlies
Across
16. 20 fins ONE-C
The US five-dollar bill is often called an “Abe”, as President Lincoln’s portrait is on the front. An Abe is also referred to as a “fin”, a term that has been used for a five-pound note in Britain since 1868.

19. Chemical formerly used in carbonless copy paper manufacture PCB
Polychlorinated biphenyls (PCBs) were banned with good reason. Apart from their link to cancer and other disorders in humans and animals, they are extremely persistent in the environment once contamination has occurred. Among other things, PCBs were used as coolants and insulating fluids in electrical gear such as transformers and large capacitors, as well as a transfer agent in carbonless copy paper.

22. Mayan pyramid feature STEP
The giant step-pyramid known as El Castillo at Chichen Itza is probably the most famous example of Mayan ceremonial architecture. Chichén Itzá is a Mayan ruin located in the Mexican state of Yucatán. It is the second most visited archaeological site in the country (after the ancient city of Teotihuacan). Chichén Itzá has seen a surge in the number of visitors since the development of nearby Cancún as a tourist destination.

26. Self-described “non-musician” ENO
Brian Eno started out his musical career with Roxy Music. However, Eno’s most oft-played composition (by far!) is Microsoft’s “startup jingle”, the 6-second sound you hear when the Windows operating system is booting up. Eno might have annoyed the Microsoft folks when he stated on a BBC radio show:

30. Checkup result letters HDL
HDL (high-density lipoprotein) is a compound that is used to transport fats around the body. When HDL is combined with (i.e. is transporting) cholesterol, it is often called “good cholesterol”. This is because HDL seems to remove cholesterol from where it should not be, say on the walls of arteries, and transports it to the liver for reuse or disposal. Important stuff …

37. Enterprise officer UHURA
Lt. Nyota Uhura is the communications officer in the original “Star Trek” television series, played by Nichelle Nichols. The role is significant in that Uhura was one of the first African American characters to figure front and center in US television. In a 1968 episode, Kirk (played by William Shatner) and Uhura kiss, the first inter-racial kiss to be broadcast in the US. Apparently the scene was meant to be shot twice, with and without the kiss, so that network executives could later decide which version to air. William Shatner says that he deliberately ran long on the first shoot (with the kiss) and fluffed the hurried second shoot (without the kiss), so that the network would have no choice.

38. Eponymous Seminole leader OSCEOLA
Chief Osceola was a leader of the Seminole Native Americans in Florida who actively resisted the removal of his people from their lands during the Second Seminole War. Osceola was captured when he was tricked into entering a US fort for peace talks. He died in prison a few months later. The Florida State University Seminoles football team uses a student dressed as Chief Osceola on his horse Renegade as a mascot at their games. This practice, approved by the Seminole Tribe of Florida, involves Chief Osceola riding onto the field and planting a flaming spear at the 50-yard line.

41. Kiwi genus APTERYX
The kiwi is an unusual bird in that it has a highly developed sense of smell and is the only one of our feathered friends with nostrils located at the tip of its long beak.

43. Disgusted word from Lady Macbeth FIE!
Lady Macbeth is an evil and treacherous woman in William Shakespeare’s “Macbeth”. The most famous lines uttered by Lady Macbeth have to be

As she utters these words, Lady Macbeth is frantically rubbing at her hand trying to get rid of an imaginary bloodstain left there after she committed four murders.

46. Kind of trading, briefly OTC
Over-the-counter (OTC) trading of stocks is a way of trading directly between two parties, as opposed to exchange trading in which trading occurs at an exchange.

47. Pabst brand STROH’S
Bernard Stroh was the son of a German brewer. Stroh immigrated to the US in 1848 and set up his own brewery in 1850 in Detroit. Years later, the Stroh Brewing Company introduced a European process called fire-brewing. This results in higher temperatures at a crucial stage in the brewing process, supposedly bringing out flavor. Stroh’s is the only American beer that still uses this process. By the way, even though the American Stroh’s brewery was set up in 1850, the label bears the words “since 1775”. This is a reference to the date that the Stroh family started brewing back in Germany.

49. Big Ten player since 2014 TERP
The sports teams of the University of Maryland are called the Maryland Terrapins, or “the Terps” for short. The name dates back to 1932 when it was coined by the the university’s president at the time, Curley Byrd. He took the name from the diamondback terrapins that are native to the Chesapeake Bay.

53. Epps of “House” OMAR
Omar Epps is the actor who played Eric Forman on the excellent television series “House”. Prior to playing Dr. Forman, Epps had a recurring role playing Dr. Dennis Grant on “ER”. And, in another link to the world of medicine, Epps was born in Savannah, Georgia to single mom, Dr. Bonnie Epps.

55. Gobs OODLES
It’s thought that the term “oodles”, meaning “a lot”, comes from “kit and caboodle”.

57. Good name for a London washroom attendant LOU
It has been suggested that the British term “loo” comes from Waterloo (water-closet … water-loo), but no one seems to know for sure. Another suggestion is that the term comes from the card game of “lanterloo” in which the pot was called the loo.

61. Apple site EDEN
In the Christian tradition, the “fall of man” took place in the Garden of Eden when Adam and Eve succumbed to the temptation of eating the fruit from the tree of knowledge of good and evil, against the bidding of God. As a result, Adam and Eve were banished from Eden to prevent them becoming immortal by eating from the tree of life. The first humans had transitioned from a state of innocent obedience to a state of guilty disobedience.

62. Leftovers dish, perhaps COTTAGE PIE
Shepherd’s pie, also known as cottage pie, is one of my favorite dishes. It is a meat pie (although my wife makes a vegetarian version), with a crust made from mashed potato.

Down
3. Crooked bread? BRIBE
The use of the word “bread” as a slang term for money dates back to the 1940s, and is derived from the term “breadwinner”, meaning the person in the house who puts bread on the table, brings in the money.

6. Knocked DERIDED
“To deride” is to treat with contemptuous mirth. The term comes into English via Old French from the Latin “deridere” meaning “to ridicule”. In turn, “deridere” comes from the prefix “de-” (down) and “”ridere” (to laugh). So, to ridicule or deride is “to laugh down at”.

7. Spouted containers FLAGONS
A flagon is a large jug with a lid, traditionally used for holding beer or wine.

8. Big name in stationery EATON
Eaton Cards and Stationery is a company that specializes in supplying stationery for weddings.

10. Mosaic piece TESSERA
A tessera is an individual tile used in making a mosaic. Tesserae are usually formed in the shape of cubes.

23. Baudelaire, par exemple POETE
Charles Baudelaire was a French poet, noted not only for his own work but also for translating the work of American poet Edgar Allen Poe.

28. Plinth course layers MASONS
A plinth is a block on which something is placed, especially a column. The Greek word “plinthos” means “squared stone”.

33. Generally gluten-free snacks RICE CAKES
Gluten is a protein mixture found in foods processed mainly from wheat. The sticky properties of gluten are used in making bread, giving dough its elasticity and making the final product chewy. “Gluten” is the Latin word for “glue”.

35. Tea __ CHEST
When I was growing up across the pond, a “tea chest” was an extremely large wooden box used to ship loose tea. We used to purchased used empty tea chests to store things in our attic. But I have learned that a North American tea chest is a wooden box with compartments for varieties of bagged teas.

39. Play that inspired Puccini LA TOSCA
“La Tosca” is a play written by Frenchman Victorien Sardou. We rarely get a chance to see the play these days, but the musical adaptation by Puccini called “Tosca” is one of the most frequently performed operas in the contemporary repertoire.

40. Fitting APROPOS
“Apropos” comes into English directly from French, in which “à propos” means “to the purpose”. Note that we use the term as one word (apropos), but the original French is two words (à propos).

48. “Sweet Smell of Success” co-screenwriter ODETS
Clifford Odets was a playwright, screenwriter and director from Philadelphia. Odets wrote a play called “Golden Boy” that was first performed in 1937 on Broadway. There was a film adaptation released in 1939 that starred a young William Holden. “Golden Boy” was the film that launched Holden’s career. There was also a 1964 musical of the same name that was based on the play.

“Sweet Smell of Success” is a 1957 movie starring Burt Lancaster and Tony Curtis, based on a novelette by screenwriter Ernest Lehman. The movie was adapted into a 2002 musical of the same name by Marvin Hamlisch.

51. Masterless samurai RONIN
In feudal Japan, a samurai who lost his master, perhaps through death or loss of favor, was known as a ronin. The term “ronin” is also used in contemporary Japan for a salaried worker between jobs.

52. Sound named by George Vancouver PUGET
George Vancouver was a British explorer, and an officer in the Royal Navy. As well as exploring the coast of Australia, he is best known for his travels along the northwest coast of North America. The city of Vancouver was named in his honor. Travelling with him on his American voyage was a lieutenant Peter Puget, and in his honor, Vancouver named the waters south of the Tacoma Narrows “Puget’s Sound”. Nowadays, the name Puget Sound describes an area much greater than Vancouver had envisioned.

60. Rover’s kin? LEM
In the Apollo program, the Lunar Excursion Module (LEM) was the vehicle that actually landed on the moon and returned the astronauts to the command module that was orbiting overhead. The third LEM built was named “Spider”, and it participated in the Apollo 9 mission which tested the functionality of the LEM design in space. The fourth LEM was called “Snoopy” and it flew around the moon in the Apollo 10 mission, the dress rehearsal for the upcoming moon landing. Apollo 11’s LEM was called “Eagle” and it brought Neil Armstrong and Buzz Aldrin to and from the moon’s surface. Another famous LEM was Apollo 13’s Aquarius. Although Aquarius never landed on the moon, it did serve as a “lifeboat” for the three astronauts after the explosive rupture of an oxygen canister in the Service Module.

Three countries have sent lunar rovers to the Moon. Famously, the Apollo Lunar Roving Vehicle (aka “moon buggy”) carried American astronauts across the Moon’s surface, on the last three missions of the Apollo program in the early seventies. Before the landing of the Apollo vehicles, the Soviet Union sent two unmanned, remote-controlled rovers to the Moon called Lunokhod 1 & 2. Years later, in 2013, the Chinese landed a lunar rover called Yutu (or “Jade Rabbit”).