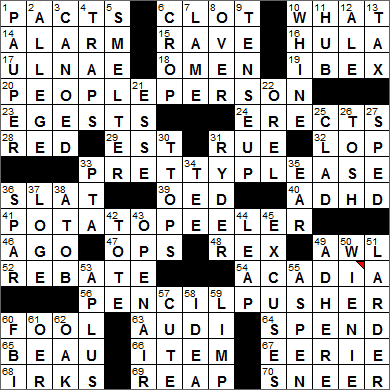 CROSSWORD SETTER: Jeff Stillman
THEME: Paired Phrases … each of today’s themed answers is a two-word phrase, with each word starting with the letter P:

Today’s Wiki-est, Amazonian Googlies
Across
16. Dance that tells a story HULA
Hula is the name of the Polynesian dance. The chant or song that the dance illustrates, that’s known as the mele.

19. Wild goat with recurved horns IBEX
Ibex is a common name for various species of mountain goat. “Ibex” is a Latin name that was used for wild goats found in the Alps and Apennines in Europe.

39. Multivolume ref. work OED
The “Oxford English Dictionary” (OED) contains over 300,000 “main” entries and 59 million words in total. It is said it would take a single person 120 years to type it out in full. The longest entry for one word in the second edition of the OED is the verb “set”. When the third edition was published in 2007, the longest entry for a single word became the verb “put”. Perhaps not surprisingly, the most-quoted author in the OED is William Shakespeare, with his most quoted work being “Hamlet”. The most-quoted female author is George Eliot (aka Mary Ann Evans).

41. KP duty need POTATO PEELER
KP is a US military slang term that stands for either “kitchen police” or “kitchen patrol”.

47. Black __: spy doings OPS
“Black ops” is the name given to covert operations, activities that are usually outside of standard military protocol and may even be against the law. Funding for black ops is usually provided by a secret “black budget”.

48. Critic Reed REX
Rex Reed is a film critic who used to co-host “At the Movies”.

54. National park on the Maine coast ACADIA
Acadia National Park in Maine was created in 1919, although back then it was called Lafayette National Park in honor of the Marquis de Lafayette who famously supported the American Revolution. The park was renamed to Acadia in 1929.

60. April honoree? FOOL
April Fool’s Day is celebrated on April 1st in the western world. In the US (and Ireland) one can make practical jokes all day long if one wants. But in the UK there is a noon deadline. Anyone pranking after midday is called an “April Fool”.

63. German automaker AUDI
The predecessor to today’s Audi company was called Auto Union. Auto Union was formed with the merger of four individual entities: Audi, Horch, DKW and Wanderer. The Audi logo comprises four intersecting rings, each representing one of the four companies that merged.

65. Bridges in Hollywood BEAU
The actor Beau Bridges is the son of actor Lloyd Bridges, and brother of actor Jeff Bridges. Beau’s best-known role is perhaps one of “The Fabulous Bakker Boys” alongside brother Jeff.

66. TMZ twosome ITEM
An unmarried couple known to be involved with each other might appear in the gossip columns. This appearance as “an item” in the papers, led to the use of “item” to refer to such a couple, but only since the very early seventies.

TMZ.com is a celebrity gossip web site launched in 2005. “TMZ” stands for “thirty-mile zone”, a reference to the “studio zone” in Los Angeles. The studio zone is circular in shape with a 30-mile radius centered on the intersection of West Beverly Boulevard and North La Cienega Boulevard.

Down
1. Prince’s lookalike, in a Twain novel PAUPER
“The Prince and the Pauper” is a novel by Mark Twain, the tale of two identical boys, one a pauper living in London, and the other Edward VI, Prince of Wales and son of Henry VIII. The pair switch places, and the plot develops from there.

3. Enjoyed a ride in a birchbark CANOED
The boat called a canoe takes its name from the Carib word “kenu” meaning “dugout”. It was Christopher Columbus who brought “kenu” into Spanish as “canoa”, which evolved into our English “canoe”.

5. Metal refinery SMELTER
Metals are found in ore in the form of oxides. In order to get pure metal from the ore, the ore is heated and the metal oxides within are reduced (i.e. the oxygen is removed) in the chemical process known as smelting. The oxygen is extracted by adding a source of carbon or carbon monoxide which uses up the excess oxygen atoms to make carbon dioxide, a waste product of smelting (and of course, a greenhouse gas).

7. __ duck LAME
The original usage of the term “lame duck” was on the London Stock Exchange where it referred to a broker who could not honor his debts. The idea was that a lame duck could not keep up with the rest of the flock and so was a target for predators.

8. “Back to you,” in CBspeak OVER
In 1945, the FCC set aside certain radio frequencies for the personal use of citizens. The use of the Citizens’ Band increased throughout the seventies as advances in electronics brought down the size of transceivers and their cost. There aren’t many CB radios sold these days though, as they have largely been replaced by cell phones.

22. Sports analyst Hershiser OREL
Orel Hershiser is big into poker now that he has retired from Major League Baseball. Hershiser lives in Las Vegas and when he isn’t working for ESPN, apparently he is at the poker tables, playing professionally. When Hershiser is eliminated in a poker tournament, he is in the habit of presenting the person who ousts him with an autographed baseball.

25. Unlike Lady Godiva CLAD
In the legend of Lady Godiva, a noblewoman rode naked through the streets of Coventry in England, basically as a dare from her husband in return for relieving the taxes of his tenants. Lady Godiva issued instructions that all the town’s inhabitants should stay indoors while she made her journey. However, a tailor in the town named Tom disobeyed the instructions by boring holes in the shutters on his windows, and “peeped”. As a result, Peeping Tom was struck blind, and the term “peeping Tom” has been in our language ever since.

26. Poppycock, to a Brit TOSH
“Tosh” is British slang for “foolish nonsense”, and is likely a combination of “trash” and “bosh”.

31. Golf’s __ Cup RYDER
The Ryder Cup trophy was donated to the game of golf by Samuel Ryder, an English entrepreneur. Ryder made his money selling garden seeds in small packets. He only took up golf when he was in his fifties but became quite the enthusiast and eventually donated the trophy in 1927, when it was valued at 100 guineas. The Ryder Cup is a biennial tournament played between teams from the US and Europe.

50. Dog at a roast WIENIE
“Wienie” is an informal variant of “wiener”.

51. Kitchen storage area LARDER
The Latin word for bacon or lard, is “lardum”, from which developed a Middle Latin word “lardarium” meaning a “room for meats”. This came into English as “larder” to describe a meat storeroom. Over time, our larders stored all types of foods and our fresh meats went into refrigerators.

55. Colorado skiing mecca ASPEN
Aspen, Colorado used to be known as Ute City, with the name change taking place in 1880. Like many communities in the area, Aspen was a mining town, and in 1891 and 1892 it was at the center of the highest production of silver in the US. Nowadays of course, it’s all about skiing and movie stars.

60. Justice Dept. agency FBI
What we know today as the FBI was set up in 1908 as the BOI, the Bureau of Investigation. The name was changed to the Federal Bureau of Investigation in 1935. The Bureau was set up at the behest of President Theodore Roosevelt. President Roosevelt was largely moved to do so after the 1901 assassination of President McKinley, as there was a perception that anarchists were threatening law and order. The FBI’s motto uses the organization’s initialism, and is “Fidelity, Bravery, Integrity”.