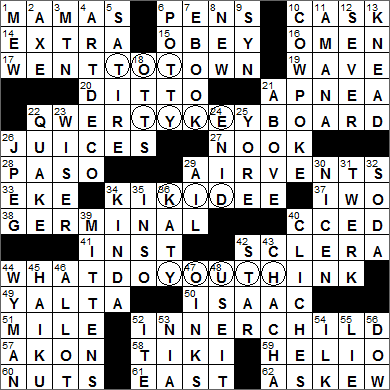 CROSSWORD SETTER: Greg Johnson
THEME: Inner Child … we get in touch with our INNER CHILD in today’s themed answers. Each themed answer contains a hidden word spelled out by the circled letters in the grid. Each hidden word is a synonym of CHILD:

52A. Psychology subject … and what’s contained in this puzzle’s circles INNER CHILD

17A. Overindulged oneself WENT TO TOWN
22A. Communications feature since the 1870s QWERTY KEYBOARD
34A. “Don’t Go Breaking My Heart” duettist KIKI DEE
44A. “Looks pretty good, huh?” WHAT DO YOU THINK?

Today’s Wiki-est, Amazonian Googlies
Across
1. Toddler coddlers MAMAS
The verb “to coddle”, meaning “to treat tenderly”, was actually coined in 1815 by Jane Austen in her novel “Emma”. At least, that is the first written record we have of the verb’s usage. John Knightley (younger brother of George Knightley) addresses his wife Isabella (elder sister of Emma Woodhouse) with the following words:

10. Port container CASK
The city of Oporto in Portugal gave its name to port wine in the late 1600s, as it was the seaport through which most of the region’s fortified red wine was exported.

20. “Me too” DITTO
“Ditto” was originally used in Italian (from Tuscan dialect) to avoid repetition of the names of months in a series of dates. So, “ditto” is just another wonderful import from that lovely land …

21. Sleeper’s malady APNEA
Sleep apnea (“apnoea” in British English) can be caused by an obstruction in the airways, possibly due to obesity or enlarged tonsils.

22. Communications feature since the 1870s QWERTY KEYBOARD
There is an alternative to the annoying QWERTY keyboard layout. Dr. August Dvorak came up with a much simpler and more efficient layout in 1936. The Dvorak layout is supposed to allow faster typing rates and to reduce repetitive strain injuries.

28. El __ PASO
Although there have been human settlements in the El Paso area for thousands of years, the first European settlement was founded in 1659 by the Spanish. That first community was on the south bank of the Rio Grande, and was called El Paso del Norte (the North Pass). Most of the urban development under Spanish rule took place on the south side of the river, with El Paso del Norte acting as the center of governance for the Spanish for the territory of New Mexico. The Rio Grande was chosen as the border between Mexico and the US in 1848, so most of the city of El Paso del Norte became part of the Mexican state of Chihuahua (and is now called Ciudad Juarez). The area north of the river developed as a US military post, eventually becoming the modern city of El Paso, Texas.

37. WWII battle site, for short IWO
Iwo Jima is a volcanic island located south of Tokyo that today is uninhabited. The name is Japanese for “Sulfur Island”, referring to the sulfur mining on which Iwo Jima’s economy once depended. There were about a thousand Japanese civilians living on the island prior to WWII. In 1944, there was a massive influx of Japanese military personnel in anticipation of the inevitable US invasion. As the Japanese military moved in, the civilians were forced out and no one has lived there since.

40. Emailed a dupe to CCED
I wonder do the kids of today know that “cc” stands for carbon copy, and do they have any idea what a carbon copy was? Do you remember how messy carbon paper was to handle?

42. White of the eye SCLERA
The sclera is the white part of the eye. Usually the sclera is white, but in horses for example, it is black. Really, go check!

49. 1945 meeting site YALTA
The Yalta Conference was a wartime meeting between WWII leaders Franklin D. Roosevelt, Winston Churchill and Joseph Stalin. Held in February of 1945, the conference is most remembered for decisions made on the post-war organization of Europe. To a large extent, the three leaders made decisions carving up political influence around the world, decisions that have profound implications to this day.

50. Stern with a bow ISAAC
Isaac Stern was Ukrainian-born, but moved with his family to San Francisco at a very young age. He was a wonderful violin virtuoso who passed away in 2001.

52. Psychology subject … and what’s contained in this puzzle’s circles INNER CHILD
The concept of the “wounded inner child” was popularized by the pop psychologist and author John Bradshaw. Bradshaw suggested that many issues in adulthood were due to unresolved childhood experiences.

57. Rapper with the debut album “Trouble” AKON
Akon is a Senegalese American R&B and hip hop singer, who was born in St. Louis but lived much of his early life in Senegal. Akon is a stage name, and his real name is Aliaune Damala Bouga Time Bongo Puru Nacka Lu Lu Lu Badara Akon Thiam. Got that?

58. Porch torch type TIKI
A tiki torch is a bamboo torch that’s very commonly used in Tiki culture. Tiki culture is a relatively modern invention dating from the 20th century, and is the experience created in Polynesian-style restaurants. The word “Tiki” is borrowed from Polynesia.

61. Right on an atlas EAST
The famous Flemish geographer Gerardus Mercator published his first collection of maps in 1578. Mercator’s collection contained a frontispiece with an image of Atlas the Titan from Greek mythology holding up the world on his shoulders. That image gave us our term “atlas”.

Down
3. Hood, for one: Abbr. MTN
Mount Hood is a volcanic peak in northern Oregon. Mount Hood is the highest peak in the state, and is located about 50 miles southeast of Portland. There are six ski areas on the mountain, including a resort called Timberline that has North America’s only lift operating year-round for skiing.

5. “The Daily Show” device SATIRE
“The Daily Show” is a satirical news program on the Comedy Central that first aired in 1996. The show was presented by Craig Kilborn from 1996 until 1998, and then very successfully by Jon Stewart from 1999 until 2015. Trevor Noah has been hosting the show since Jon Stewart left.

10. Ranch hand COWPOKE
Cowpoke is a term used nowadays for any cowboy, but it was originally limited to the cowboys who prodded cattle onto railroad cars using long poles.

11. Its website has a range finder AMANA
The Amana Corporation takes its name from the location of its original headquarters, in Middle Amana, Iowa.

13. Prep, at a pizza parlor KNEAD
Pizza was invented in Naples where it has a long tradition that goes back to Ancient Rome. During an 1889 visit to Naples, Queen Margherita of Savoy was served a special pizza that was created with toppings designed to mimic the colors of the Italian flag. The ingredients of tomato (red), mozzarella (white) and basil (green) can still be found together on menus today on a pie usually named Pizza Margherita after the queen. I do love basil on my pizza …

Ed Ott is a retired baseball catcher who played for the Pittsburgh Pirates and the California Angels of the Major Leagues. Ed Ott is no relation to the more famous Mel Ott.

24. Plains “Queen Wheat City” ENID
Enid, Oklahoma takes its name from the old railroad station around which the city developed. Back in 1889, that train stop was called Skeleton Station. An official who didn’t like the name changed it to Enid Station, using a character from Alfred Lord Tennyson’s “Idylls of the King”. Maybe if he hadn’t changed the name, the city of Enid would now be called Skeleton, Oklahoma! Enid has the nickname “Queen Wheat City” because is has a huge capacity for storing grain, the third largest grain storage capacity in the world.

25. Days long gone YORE
We use the word “yore” to mean “time long past” as in “the days of yore”. “Yore” comes from the Old English words for “of years”.

31. Dance provocatively TWERK
Twerking is a dancing move in which a woman (usually) shakes her hips up and down causing a lot of “wobbling”. It’s possible that “twerk” is a portmanteau of “twist” and “jerk”. The term may have been coined back in the early 2000s with the song “Whistle While You Twurk” released by the Ying Yang Twins. Twerking became a real phenomenon in 2013 when Miley Cyrus posted a video of herself twerking in a unicorn suit to the 2011 song “Wop” by J. Dash. That video went viral on YouTube, amassing over 4 million views in no time at all.

36. Pop’s Perry KATY
Katy Perry is an American singer who grew up listening to and singing gospel music, as she was the daughter of two Christian pastors. In fact, her first musical release was a gospel album in 2001. She has branched out since then. Her first successful single was “Ur so Gay”, followed by “I Kissed A Girl”. She was married (only for a year) to the British comedian Russell Brand, until 2012.

39. Things on strings MITTENS
Yep, when I was a toddler my mother used to sew a string to connect each of my mittens so that I wouldn’t lose them. The string went up one sleeve, across the back, and down the other sleeve.

40. Played-out sayings CLICHES
“Cliché” is a word that comes from the world of printing. In the days when type was added as individual letters into a printing plate, for efficiency some oft-used phrases and words were created as one single slug of metal. The word “cliché” was used for such a grouping of letters. It’s easy to see how the same word would become a term to describe any overused phrase. Supposedly, “cliché” comes from French, from the verb “clicher” meaning “to click”. The idea is that when a matrix of letters was dropped in molten metal to make a cliché, it made a clicking sound.

43. Ballroom dance CHA-CHA
The cha-cha-cha (often simplified to “cha-cha”) is a Latin dance with origins in Cuba, where it was introduced by composer Enrique Jorrin in 1953.

44. Longtime Rolling Stones bassist Bill WYMAN
Bill Wyman was one of the first members of the Rolling Stones, joining in 1962 and staying with the band until 1992. Wyman is multi-talented. As well as having played bass guitar with the Stones, he is a very talented photographer whose work has been shown in many galleries around the world. He is also an amateur archaeologist, and markets his own design of metal detector for the amateur relic hunter.

45. 17-syllable work HAIKU
A haiku is a very elegant form of Japanese verse. When writing a haiku in English we tend to impose the rule that the verse must contain 17 syllables. This restriction comes from the rule in Japanese that the verse must contain 17 sound units called “moras”, but moras and syllables aren’t the same thing. What the difference is though, is not so clear to me. Here’s an example of a Haiku:

56. Financial measure, with “the” DOW
Dow Jones & Company was founded as a publishing house in 1882 by three newspaper reporters, Charles Dow, Edward Jones and Charles Bergstresser. Today, the company’s most famous publication has to be “The Wall Street Journal”. In 1884, Charles Dow started reporting the average dollar value of the stock of eleven companies, an index which spawned a whole host of metrics that carry the Dow Jones name to this day, including the renowned Dow Jones Industrial Average (DJIA), also known as the “Dow 30”.