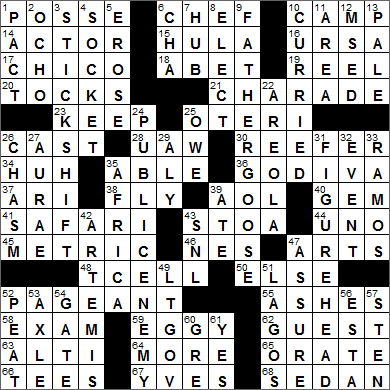 CROSSWORD SETTER: Janice Luttrell
THEME: Figurehead … each of today’s themed answers is HEADED by (starts with) a type of FIGURE:

Today’s Wiki-est, Amazonian Googlies
Across
1. Old West chasers POSSE
Our word “posse” comes from an Anglo-Latin term from the early 15th century “posse comitatus” meaning “the force of the county”.

6. Child in the kitchen CHEF
Julia Child was an American chef who is recognized for bringing French cuisine to the American public. During WWII, Julia Child joined the OSS (Office of Strategic Services), the predecessor to the CIA. She worked for the OSS in Washington, Ceylon and China. While in the OSS, she met her husband Paul Child who was also an OSS employee. Paul joined the Foreign Service after the war, and it was his posting to France that created the opportunity for Julie to learn about French cuisine. If you haven’t seen it, I highly, highly recommend the movie “Julie & Julia”, one of the best films of 2009. Meryl Streep does a fabulous job playing the larger-than-life Julia Child.

15. Dance often accompanied by a ukulele HULA
Hula is the name of the Polynesian dance. The chant or song that the dance illustrates, that’s known as the mele.

16. Heavenly bear URSA
The constellation called Ursa Major (Latin for “Larger Bear”) is often just called the Big Dipper because of its resemblance to a ladle or dipper. Ursa Major also resembles a plow, and that’s what we usually call the same constellation back in Ireland, the “plough”.

17. A Marx brother CHICO
The five Marx Brothers were born to “Minnie” and “Frenchy” Marx in New York City. The more famous older boys were Chico, Harpo and Groucho. Zeppo was the youngest brother, and he appeared in the early Marx Brothers movies. The fifth son was called Gummo, and he decided to pursue a different career off the stage.

18. Be the lookout for, say ABET
The word “abet” comes into English from the Old French “abeter” meaning “to bait” or “to harass with dogs” (it literally means “to make bite”). This sense of encouraging something bad to happen morphed into our modern usage of “abet” meaning to aid or encourage someone in a crime.

19. Angler’s gear REEL
We use the verb “to angle” to mean “to fish” because “angel” was an Old English word for a hook.

25. 43-Down alum Cheri OTERI
Cheri Oteri was the SNL cast member who regularly appeared with Will Farrell in the skit featuring a pair of Spartan cheerleaders.

28. GM labor group UAW
The United Auto Workers (UAW) was founded to represent workers in auto plants in the Detroit area in 1935. Nowadays the UAW’s membership extends into the aerospace, agriculture and other industries.

General Motors (GM) was the largest manufacturer of vehicles in the world for 77 straight years, at least in terms of numbers of cars sold, from 1931 until 2007. GM was established in 1908 in Flint, Michigan as a holding company for Buick, which in turn had been founded in 1899. GM’s Buick brand is the oldest, still-active automotive brand in the US. The company filed for Chapter 11 bankruptcy protection in 2009, and emerged from that bankruptcy just one month later, with a lot of help from the US taxpayer. In order to do so, GM had to shut down its Hummer, Pontiac and Saturn operations. The revamped General Motors then had a huge Initial Public Offering in 2010 that raised $23 billion.

30. Seaman’s double-breasted jacket REEFER
A reefer jacket is a nautical garment. It is a type of pea jacket that is worn only by officers and chief petty officers as it has gold buttons and sometimes epaulettes.

A pea coat (also “pea jacket”) is a heavy woolen outer jacket originally associated with sailors. Nowadays anyone wears them (they’re very comfortable and warm). The female equivalent of a pea coat is often called a Jackie O Jacket, apparently, after Jackie Onassis.

36. Upscale chocolate brand GODIVA
Godiva is a brand of chocolates that was founded in Brussels, Belgium in 1926. The founder chose the brand name in honor of the legend of Lady Godiva.

In the legend of Lady Godiva, a noblewoman rode naked through the streets of Coventry in England, basically as a dare from her husband in return for relieving the taxes of his tenants. Lady Godiva issued instructions that all the town’s inhabitants should stay indoors while she made her journey. However, a tailor in the town named Tom disobeyed the instructions by boring holes in the shutters on his windows, and “peeped”. As a result, Peeping Tom was struck blind, and the term “peeping Tom” has been in our language ever since.

37. Bush spokesman Fleischer ARI
Ari Fleischer was the White House Press Secretary for President George W. Bush. Fleischer now runs his own media consulting firm that specializes in representing sports players and organizations. Fleischer helped Mark McGwire handle the media when he had to admit to the use of steroids, and was briefly hired by Tiger Woods as he planned his return to the PGA after dropping out of the spotlight to handle the problems in his personal life.

39. Letters in some email addresses AOL
AOL was a leading Internet Service Provider (ISP) in the 1980s and 1990s. The company does still provide dial-up access to the Internet for some subscribers, but most users now access AOL using faster, non-AOL ISPs.

41. Spotted cats may be spotted on one SAFARI
“Safari” is a Swahili word, meaning “journey” or “expedition”.

43. Column-lined walkway STOA
A stoa was a covered walkway in Ancient Greece. A stoa usually consisted of columns lining the side of a building or buildings, with another row of columns defining the other side of the walkway. The columns supported a roof. Often stoae would surround marketplaces in large cities.

44. Game name often shouted during play UNO
In my youth I remember being taught a great card game, by a German acquaintance of mine, called Mau Mau. Years later I discovered that Uno is basically the same game, but played with a purpose-printed deck instead of the regular deck of playing cards that’s used for Mau Mau. I hear that Mau Mau is derived from the game called Crazy Eights.

46. Wii forerunner NES
The Nintendo Entertainment System (NES) was sold in North America from 1985 to to 1995. The NES was the biggest selling gaming console of the era. Nintendo replaced the NES with Wii, which is also the biggest-selling game console in the world.

48. Immune system component T CELL
T cells are a group of white blood cells that are essential components of the body’s immune system. T cells are so called because they mature in the thymus, a specialized organ found in the chest.

52. Miss Teen USA contest, e.g. PAGEANT
Miss Teen USA is a beauty pageant for girls between the ages of 14 and 19. The competition was first held in 1983, and since 2008 has been held in a resort located in Nassau in the Bahamas.

58. Proctor’s handout EXAM
A “proctor” is a supervisor, especially of an examination in a school, or perhaps of a dormitory. The word “proctor” originated in the late 1500s, a contraction of the word “procurator”, the name given to an official agent of a church.

59. Like a frittata EGGY
A “frittata” is an omelet recipe from Italy. The word “frittata” is Italian, and comes from “fritto” meaning “fried”.

64. Glutton’s demand MORE
A “glutton” is a person who eats and drinks to excess, with the term deriving from the Latin “gluttire” meaning “to swallow”.

67. The “Y” in YSL YVES
Yves Saint-Laurent (YSL) was a French fashion designer, actually born in Algeria. Saint-Laurent started off working as an assistant to Christian Dior at the age of 17. Dior died just four years later, and as a very young man Saint-Laurent was named head of the House of Dior. However, in 1950 Saint-Laurent was conscripted into the French Army and ended up in a military hospital after suffering a mental breakdown from the hazing inflicted on him by his fellow soldiers. His treatment included electroshock therapy and administration of sedatives and psychoactive drugs. He was released from hospital, managed to pull his life back together and started his own fashion house. A remarkable story …

68. Honda Accord, e.g. SEDAN
The American “sedan” car is the equivalent of the British “saloon” car. By definition, a sedan car has two rows of seating and a separate trunk (boot in the UK), although in some models the engine can be at the rear of the car.

9. Husband of a fabled storyteller, in an L. Frank Baum title FATHER GOOSE (giving “father figure”)
L. Frank Baum wrote a collection of nonsense poetry for children called “Father Goose: His Book”, which was first published in 1899. It soon became the best-selling children’s book in the US and was the author’s breakthrough work. Baum went on to write “The Wonderful Wizard of Oz” series of books.

10. Like a spicy Indian chicken dish CURRIED
Curry powder is a mixture of spices used in South Asian cuisine. The actual composition of curry powder varies depending on the cuisine. The term “curry” is an anglicization of the Tamil word “kari” meaning “sauce”.

29. Prince __ Khan ALY
Aly Khan was a familiar name used by the media when referring to Prince Ali Solomone Aga Khan, the Pakistani ambassador to the UN from 1958 to 1960. Khan made it into the papers a lot as he was the third husband of actress Rita Hayworth.

33. 1990s Philippine president RAMOS
Fidel Ramos was President of the Philippines from 1992 to 1998. I used to live in Manila, and one of my claims to fame is that I once went SCUBA diving with President Ramos. Well, I was in the same diving party, and there were three very burly guys between me and him the whole time …

35. Kilimanjaro’s locale AFRICA
Kilimanjaro is a dormant volcano in Tanzania, and is the highest mountain in the whole of Africa. I was having lunch recently with the parents of my son’s girlfriend. The young lady’s mother casually mentioned in the conversation that she summited Kilimanjaro not so long ago. I paid for lunch …

51. Old Nigerian capital LAGOS
Lagos is a port and the biggest city in Nigeria. Lagos used to be the country’s capital, until it was replaced in that role in 1991 by Abuja, a city built for just for this purpose.

52. __ moss PEAT
Peat moss is actually Sphagnum moss that has partially decayed and dried. The term “peat moss” is used as Sphagnum moss is often found in peat bogs. Sphagnum moss has the ability to store large quantities of water, so the dried form is used by gardeners to condition soil, to increase the soil’s capacity to retain moisture.

54. Scandal suffix -GATE
The Watergate scandal is so named because it involved a break-in at the Democratic National Committee (DNC) headquarters in the Watergate office complex in Washington, D.C. The Watergate complex is made up of five units, three of which are apartment buildings, one an office building, and one a hotel-office building (which housed the DNC headquarters). Watergate led to the “-gate” suffix being used for many subsequent scandals, such as “Irangate”, “Bridgegate” and “Deflategate”.

60. LSAT cousin GRE
Passing the Graduate Record Examination (GRE) is usually a requirement for entry into graduate school here in the US.