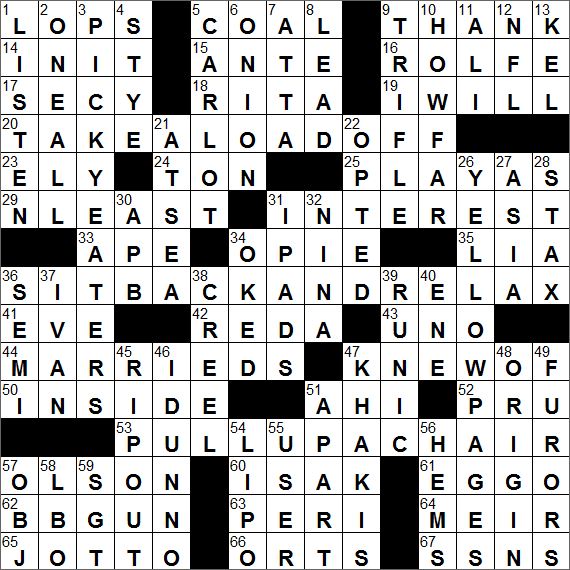 Today’s themed answers are all phrases meaning “take it easy”.

John Rolfe was one of the early English settlers in America, perhaps most famous for marrying the Native American Pocahontas, daughter of Chief Powhatan. For a few months before her death, Pocahontas lived with Rolfe in England. The couple had actually boarded a ship to return them to Virginia when Pocahontas became ill and had to be brought ashore on the south coast of England, where she soon passed away.

Ron Ely is most famous for playing the title role in the “Tarzan” TV series in the sixties. Years later, Ely hosted the 1980 and 1981 “Miss America” pageants right after longtime host Bert Parks retired, before the job was taken over by Gary Collins. And, Ely is a successful mystery novelist. He wrote “Night Shadows” and “East Beach” in the mid-nineties, both of which featured his private eye Jake Sands.

Opie Taylor is the character played by Ron Howard on “The Andy Griffith Show”. Opie lives with widowed father Sheriff Andy Taylor (played by Andy Griffith) and his great-aunt Beatrice “Aunt Bee” Taylor (played by Frances Bavier). Ron Howard first played the role in 1960 in the pilot show, when he was just 5 years old. Howard sure has come a long way since playing Opie Taylor. He has directed some fabulous movies including favorites of mine like “Apollo 13”, “A Beautiful Mind” and “The Da Vinci Code”.

Isak Dinesen was the (male) pen name of the Danish author Baroness Karen Blixen. Blixen’s most famous title by far is “Out of Africa”, her account of the time she spent living in Kenya.

Eggo is the brand name of a line of frozen waffles made by Kellogg’s. When they were introduced in the 1930s, the name “Eggo” was chosen to promote the “egginess” of the batter. “Eggo” replaced the original name chosen, which was “Froffles”, created by melding “frozen” and “waffles”.

Jotto is a word guessing game for two players. I used to play a game with colored pegs as a kid that works on the same principle that was sold under the name Mastermind.

The main purpose of a Social Security Number (SSN) is to track individuals for the purposes of taxation, although given its ubiquitous use, it is looking more and more like an “identity number” to me. The social security number system was introduced in 1936. Prior to 1986, an SSN was required only for persons with substantial income so many children under 14 had no number assigned. For some years the IRS had a concern that a lot of people were claiming children on their tax returns who did not actually exist. So, from 1986 onward, it is a requirement to get an SSN for any dependents over the age of 5. Sure enough, in 1987 seven million dependents “disappeared”.

“Paul Revere’s Ride” is an 1860 poem by Henry Wadsworth Longfellow. Here are the opening lines:

Listen my children, and you shall hear
Of the midnight ride of Paul Revere,
On the eighteenth of April, in Seventy-five;
Hardly a man is now alive
Who remembers that famous day and year

Muhammad Ali won 56 professional fights, 37 of which were knockouts. He lost 5 fights, 4 being decisions and one being a technical knockout (TKO). The TKO-loss was Ali’s second-last fight, against Larry Holmes. By the time Ali took on Holmes, he was already showing signs of Parkinson’s Syndrome, although the diagnosis would not come until four years later. Ali turned out for his last two fights largely because he needed the money.

The Jacksonville Jaguars (JAX) have been in the NFL since 1995.

The Carolina Panthers are the NFL team based in Charlotte, North Carolina.

“Kenan & Kel” is a sitcom that originally aired on Nickelodeon from 1996 to 2000. It stars Kenan Thompson (later of “Saturday Night Live”), and Kel Mitchell.

The “briny” is the sea, from “brine” meaning “salty water”. The term “briny” was originally used for “tears”.

A “yellow pages” phone directory is a listing of business and telephone numbers. The first yellow pages was introduced here in the US, back in 1886. The phrase “yellow pages” has become almost ubiquitous, although some countries (like my native Ireland) use “golden pages” instead. The term lives in the modern era as well, as the name of the business review website Yelp.com is a contraction of “YEL-low P-ages”.

Stax is a brand name of potato snack made by Lay’s. Stax are similar to its famous competitor, Pringles.

Ivan Lendl is a former professional tennis player from Czechoslovakia. Lendl appeared in eight consecutive US Open finals in the eighties, a record that stands to this day.

“Khaki” is an Urdu word, translating literally as “dusty”. The word was adopted for its current use as the name of a fabric by the British cavalry in India in the mid-1800s.

Liposuction dates back to the 1920s when it was developed by a surgeon in France. However, the procedure quickly lost favor when a French model developed gangrene after surgery. As a result it wasn’t until the mid-seventies that modern liposuction took off, after being popularized by two Italian-American surgeons in Rome.

6…Veggie that may cause tears..ONION

45…Remove roughly, as a magazine page..RIP OUT