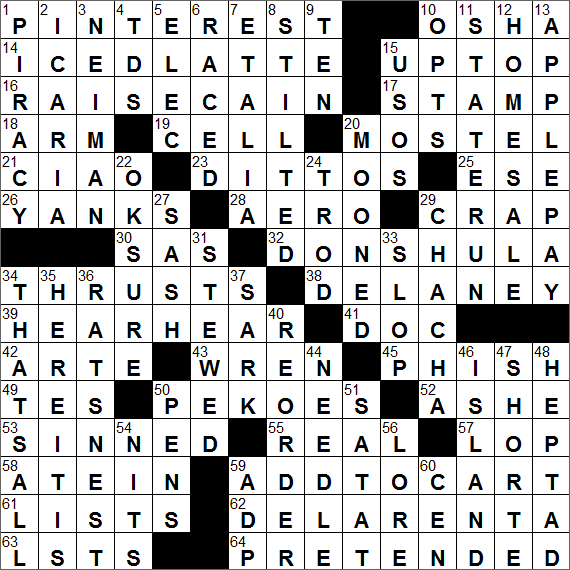 Tumblr.com is a website that mainly hosts private blogs.

The celebratory gesture that we call a “high five” is said to have been invented by former baseball players Dusty Baker and Glenn Burke when they were both playing for the Los Angeles Dodgers in the later 1970s.

As Cain was the first murderer according the Bible, he is associated with evil or trouble. The idiom “raise Cain” is the equivalent of “raise Hell” and “raise the Devil”. In all cases the meaning is to bring back evil or to cause trouble.

Zero Mostel was a stage and screen actor best known perhaps for playing Tevye on stage in “Fiddler on the Roof” and Max Bialystock in the original screen version of “The Producers”. Mostel was one of those many actors whose career languished during the 1950s as he found himself blacklisted by Senator McCarthy and co. But he rebounded, and achieved his greatest success in the sixties.

“To crap out” is to make a losing roll on the first throw in a game of craps.

Kim Delaney played Detective Diane Russell on the “NYPD Blue “, an ABC cop show that ran from 1993 to 2005.

In Spanish, a work of “arte” (art) might be in the “Museo del Prado” (Prado Museum) in Madrid.

43…Singer with a domed nest..WREN

Phishing is the name given to the online practice of stealing usernames, passwords and credit card details by creating a site that deceptively looks reliable and trustworthy. Phishers often send out safe-looking emails or instant messages that direct someone to an equally safe-looking website where the person might inadvertently enter sensitive information. “Phishing” is a play on the word “fishing”, as in “fishing for passwords, PIN numbers etc.”

“Tes” is the French word for “your”, when referring to a group of items and when talking to someone with whom you are familiar.

“Off the Court” is a 1981 autobiography by tennis player Arthur Ashe. The book deals with Ashe’s life off the court including his involvement in the struggle against apartheid in South Africa.

2…Samos neighbor named for the son of Daedalus..ICARIA

Icaria (also “Ikaria”) is a Greek island located in the Aegean Sea just over ten miles from the neighboring island of Samos. Icaria is named for Icarus, who is said to have fallen to his death in the sea nearby while trying to escape from Crete with his father Daedalus.

Herbert Marcus, his sister Carrie Marcus Neiman, and her husband A. L. Neiman, were partners with a tidy of profit of $25,000 from a business they had founded. This was 1907 Atlanta, and they were offered the chance to invest in a new company that was just starting to make “sugary soda drinks”, a company called Coca-Cola. The partners declined, instead returning to their home of Dallas and founding a department store they called Neiman-Marcus.

ESPN is the Entertainment Sports Programming Network, a cable network that broadcasts sports programming 24 hours a day. ESPN was launched back in 1979.

9…Number worn by Tony La Russa as a tribute to Sparky Anderson..TEN

Tony La Russa is a former MLB player and manager. Off the field, La Russa is well known in this part of Northern California as the founder of the Animal Rescue Foundation (ARF) headquartered in the city of Walnut Creek. The ARF is a “no-kill” animal shelter for abandoned dogs and cats. We rescued our pet dog from the ARF.

Apple Pay is a payment service that operates with many of Apple’s mobile devices. Apple Pay competes directly with Google Wallet. Much as I like the idea behind Apple Pay and Google Wallet, they just don’t seem to be gaining any traction at all in the retail market …

Google Wallet is a clever mobile payment system that allows users to store credit cards, loyalty cards, gift cards and the like on cell phones. The ideal use of the system involves just tapping one’s phone at Wallet-enabled terminal at checkout. But, there aren’t many stores that have such a capability. Great idea though …

The Usos are a wrestling tag team comprising the fraternal twins Jimmy and Jey Uso. Jimmy and Jey are of Samoan descent, but were born in San Francisco. Their real names are Jonathan and Joshua Fatu, but adopted the name “Uso” as it translates to “brother” in Samoan.

The rumba is a Cuban dance, with influences brought by African slaves and Spanish colonists. The name “rumba” comes from “rumbo”, the Spanish word for “party, spree”.

Hong Kong Island is in the southern part of the autonomous territory known as Hong Kong, located in the south of Mainland China.

The letter E in the word “nest” is a short E.

A “heptad” is a group of seven. The prefix “hept-”, that is used for “seven”, comes from Greek. The “sept-” prefix, which means the same thing, comes from Latin.

When we sit at a “counter” in a diner say, there’s a connection with money lenders. Back in the mid-1300s, a counter was the table used by a money lender doing business. The term came into English from Latin via French, ultimately from “computare” meaning “to count”.

Automatic Data Processing (ADP) is an enterprise based in Roseland, New Jersey that provides business services to companies.

43…Singer with a domed nest..WREN

2…Samos neighbor named for the son of Daedalus..ICARIA

9…Number worn by Tony La Russa as a tribute to Sparky Anderson..TEN