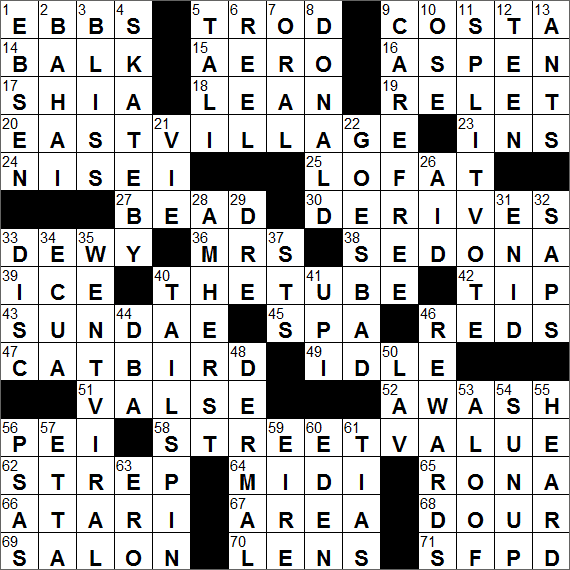 Today’s themed answers each comprise two words, the first ending with T and the second starting with V. As such, we have THE TUBE (TV) hidden inside all of the themed answers:

To balk is to stop and refuse to go on. It’s not just a baseball term!

AeroBed is an air mattress made by the Coleman Company.

The East Village is a neighborhood of Manhattan lying between Broadway and the East River, extending from 14th Street in the northeast to Houston Street in the southwest. The area was known simply as the northern part of the Lower East Side until the 1960s, when the moniker “East Village” was applied in an effort to distinguish it from the Lower East Side and its less desirable reputation. The name chosen leveraged the established image of the neighboring Greenwich Village as Manhattan’s Bohemian capital.

There are some very specific terms used to describe the children born to Japanese immigrants in their new country. The immigrants themselves are known as “Issei”. “Nisei” are second generation Japanese, “Sansei” the third generation (grandchildren of the immigrant), and “Yonsei” are fourth generation.

36…Title for Doubtfire or Dash..MRS

I’ve been to Red Rock State Park near Sedona several times, and it is a lovely place to visit. I read somewhere that there is a guided moonlight hike available, a 2½-hour guided trek that takes in sunset and moonrise. It’s on my list of things to do …

40…Set in a den, slangily … or, initially, what can be found in each answer to a starred clue..THE TUBE

The idiomatic phrase “the catbird seat” is used to describe an enviable position in which one has the upper hand. The first documented use of the expression is in a 1942 story by James Thurber called “The Catbird Seat”.

In French, a triple-meter dance might be a “valse” (waltz).

The San Francisco Police Department (SFPD) is the 11th largest police department in the country. The SFPD dates back to the days of the Gold Rush, being founded in 1849 as a force of 35 officers. SFPD has featured a lot in movies and on television. The most famous films are probably “Bullitt”, the “Dirty Harry” series and “48 Hrs.” On television there was “Ironside”, “The Streets of San Francisco” and “Monk”.

The Baha’i Faith is relatively new in the grand scheme of things, and was founded in Persia in the 1800s. One of the tenets of the religion is that messengers have come from God over time, including Abraham, the Buddha, Jesus, Muhammad, and most recently Bahá’u’lláh who founded the Baha’i Faith.

The collection of seven bones in the foot just below the foot are known collectively as the tarsus. One of those bones is the talus (plural “tali”), more commonly called the ankle bone. The talus is the lower part of the ankle joint and articulates with the lower ends of the tibia and fibula in the lower leg.

8…Name on a Trump card?..DONALD

When Donald Trump won the nomination as presidential candidate in 2016, he wasn’t the first candidate to become the Republican nominee without any political experience. The most famous such candidate in recent decades was Dwight D. Eisenhower, who was put on the top of the ticket in 1952.

Fructose is also known as “fruit sugar”. It is commonly found in plants, and is the most water-soluble of all sugars. Many of us consume a lot of “high-fructose corn syrup”. This is a sweetener made from corn starch that is a mixture of glucose and fructose. The natural ratio of fructose to glucose is altered to produce a sweeter syrup by chemically converting much of the naturally occurring glucose into fructose.

“The Hunger Games” is a 2008 novel by Suzanne Collins, the first in a trilogy of titles that also includes “Catching Fire” (2009) and “Mockingjay” (2010). “The Hunger Games” was adapted into a very successful movie released in 2012, with the sequels following soon after. Amazon.com reports more sales of “The Hunger Games” series books than even the “Harry Potter” series.

“Phonograph” was an early name for what became known as a gramophone and later a record player. Famously, the phonograph was invented in 1877 by Thomas Edison.

50…Where a Brit may powder her nose..LAV

56…”This is your brain on drugs” ads, briefly..PSAS

“This Is Your Brain on Drugs” was a memorable anti-narcotics campaign launched in 1987 that used the effective imagery of two eggs frying in a pan.

Shangdu (also “Xanadu”) was located in Inner Mongolia in China, just over 200 miles north of China. Shangdu was the capital of the Yuan dynasty that was established in 1271 by Kublai Khan. The Venetian traveller Marco Polo visited Shangdu in about 1272, and the city was destroyed by the Ming army in 1369. Centuries later in 1797, the English poet Samuel Taylor Coleridge immortalized the city (as “Xanadu”) in his celebrated poem “Kubla Khan”.

A ranchero is someone employed on a ranch, and is a word with Spanish roots.

36…Title for Doubtfire or Dash..MRS

40…Set in a den, slangily … or, initially, what can be found in each answer to a starred clue..THE TUBE

4…Glide past on the ice..SKATE BY

8…Name on a Trump card?..DONALD

50…Where a Brit may powder her nose..LAV

56…”This is your brain on drugs” ads, briefly..PSAS