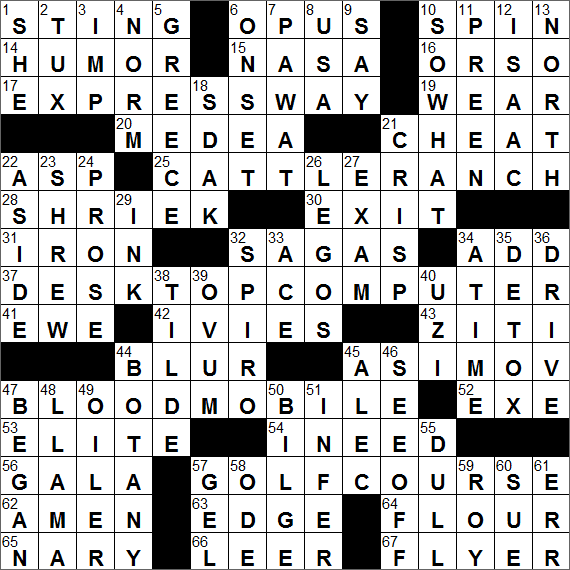 Our themed clues today all reference the word DRIVE:

“Medea” is a tragedy penned by Ancient Greek playwright Euripides. Dealing with the myth of Jason and Medea, it was not received well at its debut in 431 BC. It was premiered at that year’s Dionysia festival in Athens, competing against plays by Euphorion and Sophocles. Euphorion’s play won the competition and Euripides’ “Medea” came in last.

Euripides was a celebrated playwright of Ancient Greece, renowned for his tragedies. Euripides was one of the three great writers of tragedy of classical Athens, alongside Aeschylus and Sophocles.

The asp is a venomous snake found in the Nile region of Africa.

42…Members of an exclusive league..IVIES

“Fliers” are notices that are circulated. The original fliers (also “flyers”) were police bulletins that were “scatter-broadcast”.

Film director Spike Lee was born in Atlanta, Georgia but has very much made New York City his home and place of work. Most of Lee’s films are set in New York City, including his first feature film, “She’s Gotta Have It”. That film was shot over two weeks, with a budget of $175,000. “She’s Gotta Have It” grossed over $7 million at the US box office.

The nation of Greece is located at the southern tip of the Balkan peninsula. The mainland of Greece is bordered by three seas: the Aegean to the east, the Ionian to the west, and the Mediterranean to the south.

“Royal Pains” is a medical drama that has aired on the USA network since 2009. The storyline revolves around a “concierge doctor” named Hank Lawson, a doctor who provides medical support to residents of a resort community in the Hamptons.

12…With 45-Across, “The Bicentennial Man” author..ISAAC

Isaac Asimov was a wonderful science fiction writer, and a professor of biochemistry. He was a favorite author as I was growing up and I must admit that some hero worship on my part led me to study and work as a biochemist for a short while early in my career. My favorite of his works is the collection of short stories called “I, Robot”. Asimov wrote three autobiographies, the last of which was called “I, Asimov”, which was published in 1994, two years after his death.

“The Bicentennial Man” is a 1976 novelette by science fiction author Isaac Asimov, one of his “Robot” series of stories. The novelette provided the basis for the 1999 film “Bicentennial Man”, starring Robin Williams as the title character, a robot named “Andrew”.

The South Dakota city of Deadwood was named for the numerous dead trees found in the area when it was settled illegally by gold miners in the 1870s. The land was owned by the Lakota people, as specified in the Treaty of Laramie signed by the US government in 1868.

Letterpress is the original printing press technique, invented by Johannes Gutenberg in the mid-1400s. The basis of such printing is the use of type (letters) in relief, raised from some surface so that the letters alone make contact with the paper being printed.

A diacritic mark is added to a letter to indicate that it has a special phonetic sound. Examples of diacritic marks are the tilde above the n in Spanish words like “jalapeño” and “niño “, and the cedilla under the c in French words like “façade”.

A gamete is a reproductive cell that has half the full complement of genes needed to make a normal cell. In sexual reproduction, it takes two gametes, one from each parent, to fuse into one cell which then develops into a new organism. The female gamete is the ovum, and the male the sperm.

Gregor Mendel was an Austrian monk, and a scientist who achieved fame after his passing when his work in the field of genetics was rediscovered. The conclusions he drew from his studies of garden peas led to him earning the moniker “father of modern genetics”.

Alec Waugh was the older brother of the more famous Evelyn Waugh. Both were successful novelists (Evelyn of “Brideshead Revisited” fame), but what I like about Alec is that he supposedly invented the cocktail party. He invited his friends around “for tea” in the twenties, and served them all rum swizzles instead!

The National Hockey League’s Edmonton Oilers are so called because they are located in Alberta, Canada … oil country.

The bilge is lowest internal part of a ship. The water that collects in there is called bilge water. The term “bilge” is also used as slang for nonsense talk.

Percy Bysshe Shelley was an English Romantic poet. Shelley had strong views on vegetarianism. He was dedicated to the cause of all sentient beings, believing that the slaughter of animals by humans for the use of food was a barbaric practice. He wrote a famous essay on the subject called “A Vindication of Natural Diet” in 1813.

37…Place to install a 36-Down..DESKTOP COMPUTER

42…Members of an exclusive league..IVIES

53…One percent, so to speak..ELITE

12…With 45-Across, “The Bicentennial Man” author..ISAAC