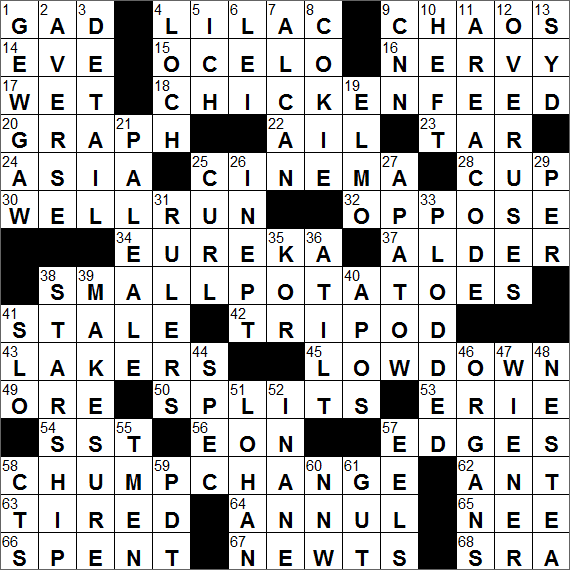 Each of today’s themed answers has the same clue, namely “Peanuts”. The answers themselves are familiar phrases meaning “something of little value, peanuts”.

“To gad about” is to move around with little purpose. The word “gad” comes from the Middle English “gadden” meaning “to hurry”.

“o-cel-o” is a brand of kitchen sponge was introduced in 1947, and is made today by 3M. The “o-cel-o” name comes from chemical components used in the product’s manufacture, i.e. oxygen-cellulose-oxygen.

Coal tar is one of the by-products of the production of coke and/or coal gas from coal. It is a dark liquid comprising several organic compounds. Industrially, coal tar can be used as a sealcoat for pavements, and as a fuel for fire boilers. Medicinally, coal tar is used in shampoos to treat dandruff and kill lice.

We usually use the term “movie theater” in the US to describe a location that shows films. In many English-speaking countries outside of the US, the term “cinema” is used instead, with the word “theater” (usually spelled “theatre”) reserved for venues that show live performances.

Eureka, California is the largest city on West Coast between San Francisco and Portland. It is a port city lying on Humboldt Bay that was settled by Europeans in 1850. Gold was discovered nearby, and this led to the settlement taking the name “Eureka”, which means “I’ve found it!” in Greek.

Alder trees are deciduous (i.e. not evergreen), and the fruit of the tree is called a “catkin”. The tree carries both male and female catkins that look very similar to each other, but the male catkin is longer than the female. Alders are pollinated by wind usually, although bees can play a role.

New York’s state capital of Albany was founded as a Dutch trading post called Fort Nassau in 1614. The English took over the settlement in 1664 and called it Albany, naming it after the future King of England James II, whose title at the time was the Duke of Albany.

A “gewgaw” is a trinket, a trivial piece of jewelry. It’s also a term I’ve never seen outside of crosswords …

The Alaska Highway is also known as the Alaska-Canadian Highway or ALCAN Highway. A highway connecting the contiguous United States to Alaska was proposed in the twenties, but the Canadian authorities didn’t believe the project had much merit as the road would be used by very few of its citizens. The perceived importance of the route increased during WWII and President Roosevelt deemed the road a strategic necessity so he made a deal with Canada. The cost of construction would be born by the US, but the road and related facilities were to be handed over to Canada at the end of the war. The project was accelerated when the Japanese invaded and occupied Kiska and Attu Islands in the Aleutians. The road of course has been improved and is still in use today. The ALCAN Highway forms part of what is popularly known as the Pan-American Highway, which runs from Prudhoe Bay, Alaska to the south of Argentina or Chile depending on how the route is defined.

Cokie Roberts is a great journalist and author, best known for her work with National Public Radio.

Erin Burnett is a television journalist, the host of her own show on CNN called “Erin Burnett OutFront”. Apparently Burnett also shows up occasionally as advisor to Donald Trump on “The Celebrity Apprentice”.

Area codes were introduced in the 1940s. Back then the “clicks” one heard when dialling a number led to mechanical wear on various pieces of equipment. In order to minimize overall mechanical wear, areas with high call volumes were given the most efficient area codes (lowest number of clicks). That led to New York getting the area code 212, Los Angeles 213 and Chicago 313.

The “Sesame Street” character has a birthday every February 3rd, and on that birthday he always turns 3½ years old. The man behind/under Elmo on “Sesame Street” is Kevin Clash. If you want to learn more about Elmo and Clash, you can watch the 2011 documentary “Being Elmo: A Puppeteer’s Journey”.

If one is capable, one might jokingly be described as “ept”, the ostensible opposite of “inept”.

Judd Apatow is known for producing the TV series “Freaks and Geeks” and “Undeclared”. Those shows aren’t my cup of tea, but he also collaborated with Lena Dunham to create the show “Girls”. I could drink that tea all day long. “Girls” is a very entertaining series …

The first Mobile Army Surgical Hospital (MASH) was deployed in August 1945. MASH units really came into the public consciousness after publication of the 1969 Richard Hooker novel “MASH”, which spawned the hit film and TV series that were both called “M*A*S*H”.

44…What a freelancer may work on..SPEC

The term “free lance” was coined by Sir Walter Scott in his 1820 novel “Ivanhoe”, using it to describe a medieval mercenary warrior. Forty years later, a freelancer was a journalist who did work for more than one publication without a long-term commitment.

I think that actress Lindsay Lohan’s big break was in the Disney remake of “The Parent Trap” in 1998. I’ve really only enjoyed one of Lohan’s films though, “Freaky Friday” from 2003 in which she stars alongside the fabulous Jamie Lee Curtis.

A T-man is a law-enforcement agent of the US Treasury (T is for Treasury).

The euro is divided in 100 cents, sometimes referred to as “euro cents”. Some countries within the European Union (Ireland, for example) are taking steps to withdraw the 1-cent and 2-cent coins from circulation by allowing cash transactions to be rounded to the nearest five cents. I found it a little odd when shipping in Ireland recently, buying something priced at 99 cents, and getting no change after handing over a euro coin …

57…Tops by a slight margin..EDGES

63…Ready to hit the hay..TIRED

12…Makes trite, in a way..OVERUSES

44…What a freelancer may work on..SPEC