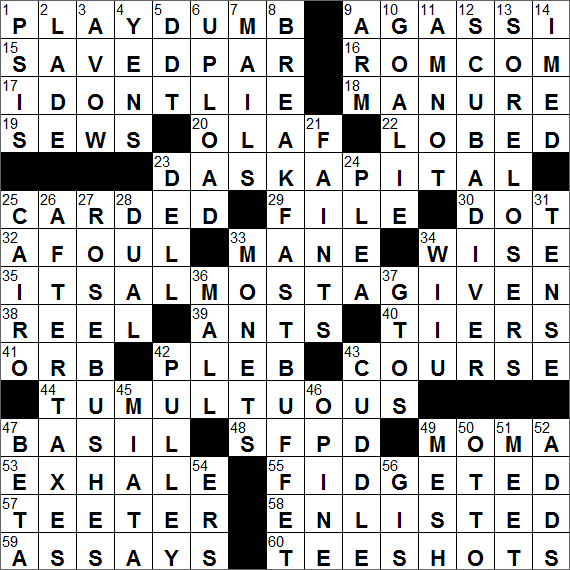 Retired tennis professional Andre Agassi has been married to fellow player Steffi Graf since 2001. Agassi wrote an autobiography called “Open”, published in 2009. An amazing revelation in the book is that Agassi’s famous head of hair was actually a wig for much of his playing career. Can you imagine how hard it must have been to play tennis at his level with a rug stuck on?

Whether an earlobe is free or attached is an example of genetic dominance at play. The dominant gene calls for free earlobes, and the recessive for attached. Among cultural groups, the Japanese and Chinese have a relatively high incidence of attached earlobes, running at about 65% of the population.

“Das Kapital” (entitled “Capital” in English versions) is a book about political economy written by Karl Marx, first published in 1867. The book is in effect an analysis of capitalism, and proffers the opinion that capitalism relies on the exploitation of workers. Marx concludes that the profits from capitalist concerns come from the underpaying of labor.

A pheromone is a chemical secreted by an animal that triggers a social response of some sort in members of the same species. Sex pheromones are usually released by females, indicating availability for breeding. Trail pheromones are laid down to guide others from a nest to food. Territorial pheromones are used to mark the boundaries of an animal’s territory.

“Murder in the First” is a TV detective drama set in San Francisco. Each season of the show follows just one case, as two SFPD homicide investigators try to solve the crime. I haven’t seen this one, but I hear good things …

“Christina’s World” is an Andrew Wyeth painting that dates back to 1948. The subject of the work is Christina Olson, a woman who suffered from polio that paralyzed her lower body. In the picture, Wyeth painted Christina crawling across a field towards a house in the distance.

The Greek letter psi is the one that looks a bit like a trident or a pitchfork.

2…Prepare for a crossing, perhaps..LADE

The verb “lade” meaning “to load” comes from an Old English word “hladan”. Lade also used to mean “to draw water” and indeed gave us our word “ladle”. So “lade” and “ladle” are close cousins.

The word “yen”, meaning “urge”, has been around in English since the very early 1900s. It comes from the earlier word “yin” imported from Chinese, which was used in English to describe an intense craving for opium!

Even though instant messaging (sending IMs) has been around since the 1960s, it was AOL who popularized the term “instant message” in the eighties and nineties.

Dell, the computer manufacturer, is named after the company’s founder Michael Dell. Michael Dell started his company in his dorm room at college, shipping personal computers that were customized to the specific needs of his customers. He dropped out of school in order to focus on his growing business, a decision that I doubt he regrets. Michael Dell is now one of the richest people in the world.

Cairo is the capital city of Egypt. It is the largest city on the continent of Africa and is nicknamed “The City of a Thousand Minarets” because of its impressive skyline replete with Islamic architecture. The name “Cairo” is a European corruption of the city’s original name in Arabic, “Al-Qahira”.

27…Sight from the Oval Office..ROSEBUSHES

The Musée de l’Orangerie in Paris is an art gallery with a fabulous collection of impressionist and post-impressionist works. The original building was erected to shelter orange trees, hence the name. The museum holds a beautiful series of water-lily paintings by Monet in two wonderfully lit oval rooms.

The Wii U video game console is the successor to Nintendo’s Wii. I’m wondering if “Wii U” is some sort of play on the pronouns “we you”? Maybe I just think too much …

When the Pontiac division of General Motors brought out the GTO muscle car, the Oldsmobile division responded with a beefed-up version of the Cutlass that was dubbed 4-4-2. The 4-4-2 designation indicated a four-barrel carburettor, a four-speed manual gearbox and dual exhausts.

In the world of software development, the first tested issue of a new program is usually called the “alpha” version. Expected to have a lot of bugs that need to be fixed, the alpha release is usually distributed to a small number of testers. After reported bugs have been eliminated, the refined version is called a “beta” and is released to a wider audience, but with the program clearly labeled as “beta”. The users generally check functionality and report further bugs that are encountered. The beta version feeds into a release candidate, the version that is tested just prior to the software being sold into the market, bug-free. Yeah, right …

50…One of the Ringling brothers..OTTO

15…Chipped in from off the green, perhaps..SAVED PAR

35…”Pretty much goes without saying”..IT’S ALMOST A GIVEN

2…Prepare for a crossing, perhaps..LADE

3…Put out in the open..AVOW

13…They may be upset about being upset..SORE LOSERS

27…Sight from the Oval Office..ROSEBUSHES

50…One of the Ringling brothers..OTTO