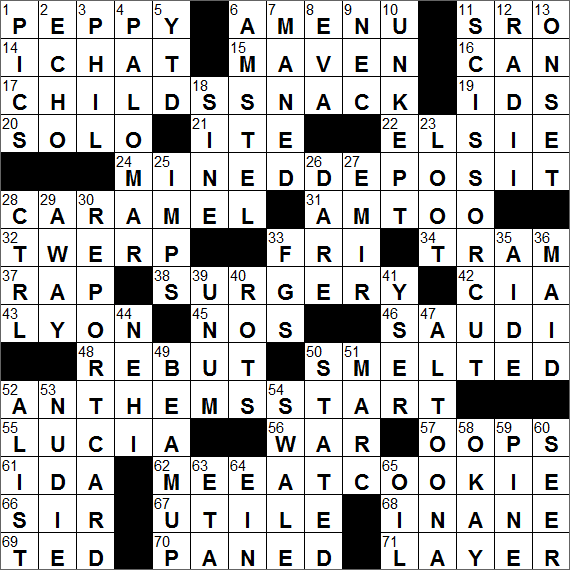 Today’s themed clues start with “OREO”, and we EAT away at this COOKIE until we are just left with the clue “O”.

Elsie the Cow is the mascot of the Borden Company. Elsie first appeared at the New York World’s Fair in 1939, introduced to symbolize the perfect dairy product. Elsie was also given a husband named Elmer the Bull. Elmer eventually moved over to the chemical division of Borden where he gave his name to Elmer’s Glue.

The term “pill” can be used to describe a boring and disagreeable person, a “bitter pill to swallow”.

33…When workers may be dressed down?: Abbr…FRI

That would be casual Friday.

The CIA headquarters is located in Langley, Virginia in a complex called the George Bush Center for Intelligence, named for former Director of the CIA and US President George H. W. Bush.

The city of Lyon in France, is also known as “Lyons” in English. Lyon is the second-largest metropolitan area in the country, after Paris.

The Rhône river rises in Switzerland and flows through the southeast of France.

Medina is a city in western Saudi Arabia. Medina is the second holiest city in the Islamic tradition after Mecca, as it is the burial place of the Prophet Muhammad.

“O say can you see by the dawn’s early light” is the opening line of “The Star-Spangled Banner” by Francis Scott Key. The song was adopted as the US national anthem in 1931, although it had been used officially by the US Navy since 1889, played when raising the flag.

War is a card game, mainly played by young children.

Cookie Monster is a beloved Muppet on the TV show “Sesame Street”. He is a big eater, and is especially fond of cookies, which he eats while grunting out “Om nom nom nom”.

The marvelous actor Anthony Hopkins got his big break in movies playing Richard the Lionheart in the 1968 historical drama “The Lion in Winter”. Hopkins hails from the south coast of Wales, and was encouraged in his early career by fellow Welshman Richard Burton, whom he met when he was a teenager. I’d say that Hopkins’ best-known film role was Hannibal Lecter in “The Silence of the Lambs”.

As well as playing in left field for the Boston Red Sox, Ted Williams served as a pilot in the Marine Corps in World War II and the Korean War. Williams earned a few colorful nicknames during his baseball career, including “The Splendid Splinter”, “Teddy Ballgame”, “The Thumper” and “The Greatest Hitter Who Ever Lived”.

3…Dad of Haley, Alex and Luke on “Modern Family”..PHIL

The character Phil Dunphy on the sitcom “Modern Family” is played by actor Ty Burrell. Phil is a real estate agent and refers to his role in his family as “cool Dad”.

Amstel is a Dutch beer and brewery, founded in 1870 in Amsterdam. The brewery takes its name from the Amstel river that runs through the city.

Eva Longoria is a fashion model and an actress who had a regular role on TV’s “Desperate Housewives”, playing Gabrielle Solis.

NEC is the name that the Nippon Electric Company chose for itself outside of Japan after a rebranding exercise in 1983.

12…Two of three sides of a typical pie slice..RADII

An emir is a prince or chieftain, most notably in the Middle East. In English, emir can also be written as emeer, amir and ameer (watch out for those spellings in crosswords!).

In Daniel Defoe’s 1719 novel “Robinson Crusoe”, the castaway encounters a companion that Crusoe calls “Friday”, because the two first met on that day. Friday soon becomes his willing servant. This character is the source of our terms “Man Friday”, “Guy Friday” and “Girl Friday”, which are used to describe a particularly competent and loyal assistant.

The brand of Nehi cola has a name that sounds like “knee-high”, a measure of a small stature. Back in the mid-1900’s the Chero-Cola company, which owned the brand, went for a slightly different twist on “knee-high” in advertising. The logo for Nehi was an image of a seated woman’s stockinged legs, with her skirt pulled up to her knees, to hint at “knee-high”.

47…City with a Penn State campus..ALTOONA

Altoona is in central Pennsylvania, and is home to the Ivyside Park Campus of Pennsylvania State University.

49…Admit to the Enterprise, in a way..BEAM UP

The USS Enterprise is a starship in the “Star Trek” universe (pun!). There have been several generations of starship with the name Enterprise, starting with the vessel numbered NCC-1701, which appeared in the original TV series. My favorite “Star Trek” series is “Next Generation”, which features USS Enterprise NCC-1701-D.

Marc Anthony is the stage name of Marco Antonio Muñiz, a Puerto Rican-American singer. Anthony’s first wife was Dayanara Torres, a former Miss Universe from Puerto Rico. His second wife was quite famous too … singer and actress Jennifer Lopez. He divorced from the latter in 2014.

63…It may be delayed by rain: Abbr…ETA

33…When workers may be dressed down?: Abbr…FRI

3…Dad of Haley, Alex and Luke on “Modern Family”..PHIL

12…Two of three sides of a typical pie slice..RADII

36…Servant for the inn crowd..MAID

47…City with a Penn State campus..ALTOONA

49…Admit to the Enterprise, in a way..BEAM UP

53…Show that shows too much?..NUDIE

63…It may be delayed by rain: Abbr…ETA