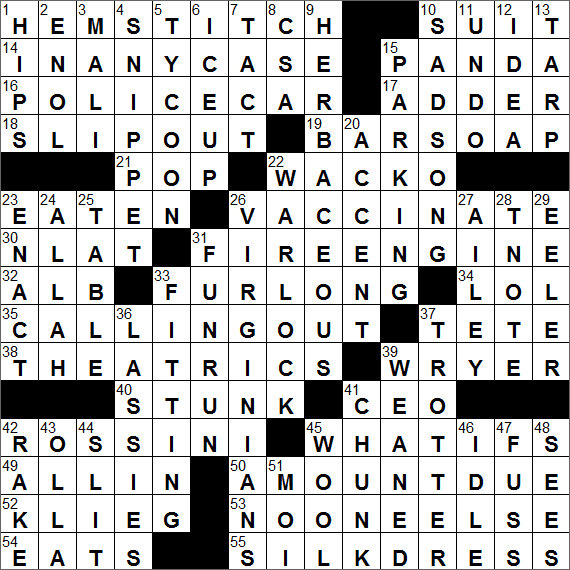 A police car is often referred to by the slang term “black and white”, a reference to the vehicle’s common paint scheme.

26…Protect against harm, in a way..VACCINATE

A vaccine is a modified virus that causes a particular disease, which is administered to an individual to stimulate the immune system into developing immunity. British physician Edward Jenner came up with the first vaccine, injecting people with the cowpox virus in order to prevent smallpox. The term “vaccination” comes from the Latin “vaccinus” meaning “from cows”, with “vacca” translating as “cow”.

33…One of ten in the Kentucky Derby..FURLONG

There are about five furlongs in a kilometer. The name “furlong” comes from the Old English “furh” (meaning “furrow”) and “lang” (meaning “long”). In Anglo-Saxon times, a furlong was the length of a furrow in ploughed field that was one acre in area. The width of said one-acre field was defined as one chain.

The first Kentucky Derby was run in 1875, and is a race modelled on the Epsom Derby in England and the Grand Prix de Paris (now called the “Prix de l‘Arc de Triomphe”). As such, The Kentucky Derby was run over 1½ miles (12 furlongs), although in 1896 this was shortened to 1¼ miles (10 furlongs). The winning horse is presented with a very elaborate blanket made of red roses.

42…A museum in Pesaro, Italy, marks his birthplace..ROSSINI

49…Possible response to “I raise”..ALL IN

The official birthplace of the incredibly popular poker game of Texas hold ‘em is Robstown, Texas where the game dates back to the early 1900s. The game was introduced into Las Vegas in 1967 by a group of Texan enthusiasts including Doyle Brunson, a champion often seen playing on TV today. Doyle Brunson published a poker strategy guide in 1978, and this really helped increase the popularity of the game. But it was the inclusion of Texas hold ‘em in the television lineup that really gave the game its explosive surge in popularity, with the size of the prize money just skyrocketing.

50…Words seen before a dollar sign..AMOUNT DUE

A Klieg light is the intensely bright spotlight used to illuminate film sets and theater stages. The lights use tungsten-halogen filaments, and were invented by brothers John and Anton Kliegl.

The Confederate States of America (CSA) set up government in 1861 just before Abraham Lincoln took office. Jefferson Davis was selected as President of the CSA at its formation and retained the post for the life of the government.

A male practitioner of black magic can be referred to as a witch, but also as a warlock. The term “witch” is used predominantly for female sorcerers.

27…Dancer posthumously awarded the Presidential Medal of Freedom in 2014..AILEY

Alvin Ailey was a dancer who formed his own group in New York in 1958, the Alvin Ailey American Dance Theater. The most famous work that Ailey choreographed was called “Revelations”. President Barack Obama awarded Ailey the Presidential Medal of Freedom, posthumously in 2014.

The Scottish city of Aberdeen is located amidst plentiful supplies of granite, which were actively quarried until the 1970s. Many local buildings incorporate the granite in their structure. Aberdeen granite is especially prized for its high levels of mica, which can cause the stone to sparkle like silver.

Paella is sometime referred to as the Spanish national dish, but not by Spaniards. In Spain, paella is regarded as a typical regional dish from Valencia.

“Excusez-moi” is French for “excuse me”.

17…One putting two and two together..ADDER

26…Protect against harm, in a way..VACCINATE

31…Inspiration for a red shade..FIRE ENGINE

33…One of ten in the Kentucky Derby..FURLONG

42…A museum in Pesaro, Italy, marks his birthplace..ROSSINI

49…Possible response to “I raise”..ALL IN

50…Words seen before a dollar sign..AMOUNT DUE

9…Not woody, to a botanist..HERBACEOUS

27…Dancer posthumously awarded the Presidential Medal of Freedom in 2014..AILEY