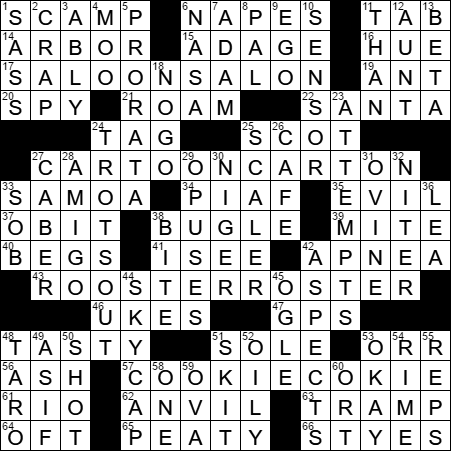 Today’s themed answers are almost repeated words. The first word is the same as the second, but with a single-letter O replaced with a double-letter O:

Back in the 16th or 17th centuries, the word “scamp” was used to describe a highway robber. The usage evolved to mean “rascal” in the early 1800s.

The American word “scalawag” meaning “rogue” was used as a nickname for southern white people who supported reconstruction after the Civil War.

Our term “barber” comes to us via Anglo-French from the Latin “barba” meaning “beard”. Barbers originally offered a wide range of services, including surgery. Henry VIII restricted barbers to just haircutting … and dentistry!

James Bond was the creation of writer Ian Fleming. Fleming “stole” the James Bond name from an American ornithologist. The number 007 was “stolen” from the real-life, 16th century English spy called John Dee. Dee would sign his reports to Queen Elizabeth I with a stylized “007” to indicate that the reports were for “her eyes only”. There’s an entertaining miniseries that aired on BBC America called “Fleming: The Man Who Would Be Bond” that details Ian Fleming’s military career, and draws some nice parallels between Fleming’s experiences and aspirations and those of his hero James Bond. Recommended …

The word “cartoon” was originally used for a “drawing on strong paper”, a durable drawing used as a model for another work. The term comes from the French word “carton” meaning “heavy paper, pasteboard”. Cartoons have been around a long time, with some of the most famous having being drawn by Leonardo da Vinci.

Pago Pago is the capital of American Samoa in the South Pacific. The island was used by the US Navy during WWII and it managed to escape most of the conflict. The only military incident of consequence was the shelling of the city’s harbor by a Japanese submarine. A more devastating event was the tsunami that hit Pago Pago and surrounding areas in 2009, causing widespread damage and numerous deaths.

La Môme Piaf (the little sparrow) was the nickname of France’s most famous singer, Édith Piaf. What a voice this woman had, and what gorgeous ballads she sang. Édith Piaf lived a life that was not without controversy. She was raised by her mother in a brothel in Normandy, and had a pimp as a boyfriend in her teens. She had one child, while very young, born illegitimately and who died at 2-years-old from meningitis. Her singing career started when she was discovered in the Pigalle area of Paris by nightclub owner Louis Leplée. Leplée was murdered soon after, and Piaf was accused of being an accessory to the murder but was later acquitted. During World War II she was branded a traitor by many as she frequently performed for the German occupying forces, although there are other reports of her supporting the resistance movement. Later in her life she was seriously injured in no less than three, near-fatal car accidents, including one with her friend, Charles Aznavour. While recovering from her injuries she became addicted to pain medication, an addiction that lasted for the rest of her life. When she died in 1963 she was denied a Catholic funeral mass because of her lifestyle, but the crowds that turned out for her funeral procession managed to stop all traffic in Paris, the only time that has happened since the end of WWII.

“Taps” is played nightly by the US military, indicating “lights out”. It’s also known as “Butterfield’s Lullaby” as it is a variation of an older bugle call named the “Scott Tattoo”, arranged during the Civil War by the Union Army’s Brigadier General Daniel Butterfield. The tune is called “Taps”, from the notion of drum taps, as it was originally played on a drum, and only later on a bugle. The whole tune comprises just 24 notes, with there only being four different notes within the 24, i.e. “low G”, C, E and “high G”. Minimalism at its best …

According to the American Lung Association, about four out of five homes in the US have dust mites in at least one bed. Houses with carpets are more likely to have dust mites, as are homes in humid parts of the country. Dust mites can be eradicated from by exposing them to a temperature over 105 degrees C in a clothes dryer.

“To panhandle” is “to beg”. The term has been in use since the very early 1900s and probably comes from the sticking out of one’s hand and arm, like the handle of a pan.

Cokie Roberts is a great journalist and author, best known for her work with National Public Radio.

Even though the 2016 Olympic Games was a “summer” competition, it was held in Rio de Janeiro in the winter. As Rio is in the southern hemisphere, the opening ceremony on 5th August 2016 fell in the local season of winter. The 2016 games was also the first to be held in South America, and the first to be hosted by a Portuguese-speaking country.

Skylab was sent into orbit by NASA in 1973 and continued to circle the Earth there until 1979. Although it was in orbit for many years, Skylab was only occupied by astronauts for 171 days, in three missions in 1973-1974. Skylab burned up in the Earth’s atmosphere a lot earlier than expected, showering some huge chunks of debris on our friends in Australia.

The caber toss must be the most recognizable event in the Scottish Highland Games. The tall pole is 19’ 6” long and weighs a whopping 175 pounds. The event may have originated with the practice of tossing large logs across chasms in order to cross them.

The chemical name for saltpeter (also called “niter, nitre”) is potassium nitrate. The exact origin of the name “saltpeter” isn’t clear, but it may have come from the Latin “sal petrae” meaning “stone salt”. The main use for potassium nitrate is as a fertilizer, a source of potassium and nitrogen. As it is a powerful oxidizing agent, it is also used in amateur rocket propellants. Anyone who has ignited one of those “engines” would have noticed the lilac-colored flame, indicating the presence of potassium.

A “skycap” is an airport porter, with the name coming from the term “redcap”, used for a railroad porter.

“Redcap” is a term used for a railroad station porter here in North America. That term comes from the fact that redcaps wear red caps!

The corm of some taro plants is used to make poi, the traditional Hawaiian dish (that I think tastes horrible). When a taro plant is grown as an ornamental, it is often called Elephant Ears due to the shape of its large leaves.

“Laugh-In” was originally recorded as a one-off special for NBC in 1967, but it was so successful that it was brought back as a series to replace the waning “The Man from U.N.C.L.E.” Personally, back then I loved both shows!

17. Place for a haircut and a whiskey? : SALOON SALON

3. How experts do their jobs : ABLY

24. Brings forward for inspection : TROTS OUT