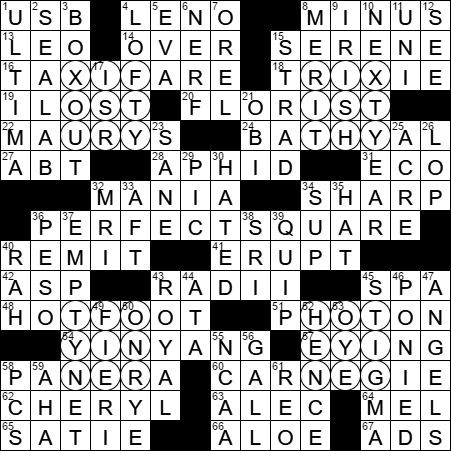 The unscrambled PERFECT SQUARES spell out:

18. Younger daughter of Hi and Lois, in comics : TRIXIE

Maury Wills is a former baseball player and manager who is very much associated with the tactic of stealing bases. In 1962, Wills stole a record 104 bases, which was more bases stolen than the whole of any other team that season.

Maury Povich has his own daytime talk show called “Maury”. He has famous family connections. Maury’s father was Shirley Povich, a columnist and sports reporter for the Washington Post, and his wife is Connie Chung the news anchor.

An ocean’s bathyal zone extends from a depth of 3,300 to 13,000 feet below the surface. It is the shallowest zone receiving no sunlight, leading to the nickname “midnight zone”. Due to the lack of sunlight, there are no plants in the bathyal zone. Also, many of the species of fish found in the zone lack eyes.

Mikhail “Misha” Baryshnikov started his dancing career with the Kirov Ballet in Leningrad before defecting to Canada in 1974. The only time my wife ever lined up to get an autograph was when she did so outside the stage door after seeing Baryshnikov dance in Syracuse, New York many moons ago. The man is a god in her eyes …

Aphids are called “greenfly” back in the British Isles where I come from. The most effective way to control aphids in my experience is to make sure there are plenty of ladybugs in the garden (called ladybirds in Ireland!).

Cheddar cheese takes its name from the English village of Cheddar in Somerset. Over 50% of the cheese sold in the UK is cheddar. Here in the US cheddar is the second most popular cheese sold, behind Mozzarella.

36. With some unscrambling, the contents of each set of circles : PERFECT SQUARE

The hot foot “prank” involves someone setting fire to a victim’s shoe laces.

Panera Bread is a chain of bakery/coffeehouses. A Panera restaurant a good place to get online while having a cup of coffee. Back in 2006 and 2007, Panera was the largest provider of free Wi-Fi access in the whole of the US.

The author Cheryl Strayed has written several successful books, most notably her 2012 memoir “Wild: From Lost to Found on the Pacific Crest Trail”. “Wild” was adapted into a 2014 film starring Reese Witherspoon as Strayed. I haven’t seen the film yet, but my wife had and really enjoyed it …

Alec Baldwin is the oldest of the acting Baldwin brothers. I think Alec’s big break was playing Tom Clancy’s Jack Ryan in “The Hunt for Red October”, but thank goodness that role was taken over by Harrison Ford for the subsequent Jack Ryan movies. Baldwin also made a name for himself playing Jack Donaghy on “30 Rock”, opposite Tina Fey. More recently, he is known for impersonating Donald Trump on “Saturday Night Live”.

Mel Tillis is a country singer who had most of hits in the seventies. Notably, Tillis has a speech impediment, but this does not affect his singing at all.

Erik Satie was a French composer most famous for his beautiful composition, the three “Gymnopédies”. I have tried so hard to appreciate other works by Satie but I find them so very different from the minimalist simplicity of the lyrical “Gymnopédies”.

SEALAB I, II and II were man-made habitats built by the US Navy designed to advance the technology needed for humans to live and work underwater for extended periods. SEALAB I was lowered to a depth of just under 200 feet off the coast of Bermuda in 1964. Four divers stayed in SEALAB for 11 days, before the experiment was halted due to the approach of a tropical storm.

Eva Longoria is a fashion model and an actress who had a regular role on TV’s “Desperate Housewives”, playing Gabrielle Solis.

Nerf is soft material used in a whole series of toys designed for “safe” play indoors. The Nerf product is used to make darts, balls and ammunition for toy guns. “NERF” is an acronym, standing for Non-Expanding Recreational Foam.

Orel (also Oryol) is a city lying on the Oka River, just over 200 miles SSW of Moscow. Orel was one of the cities occupied by Germany during WWII. It was liberated in 1943, but had been almost completely destroyed.

Ivan Turgenev was a Russian novelist and playwright. Turgenev’s most famous works are a collection of short stories called “A Sportsman’s Sketches” (1852) and the novel “Fathers and Sons” (1862).

The athletic teams of the University of Notre Dame in South Bend, Indiana are known as the Fighting Irish. There are several debated etymologies for the moniker “Fighting Irish”, with the most generally accepted being that it was applied by the press in the 1920s, reflecting the team’s’ fighting spirit and grit, determination and tenacity. I guess “grit, determination and tenacity” are characteristics often associated with the Irish.

Generations of the Stradivari family produced violins, the most famous of which were constructed by Antonio Stradivari.

Sapporo is the fourth largest city in Japan, and lies on the island of Hokkaido. The city and surrounding area was home in 1972 to the first Winter Olympic Games to be held in Asia. For the beer drinkers out there, Sapporo is also home to Sapporo Brewery, with the Sapporo beer being one of the more internationally recognizable.

“I Hated, Hated, Hated This Movie” is a collection consisting of a couple of hundred of Roger Ebert’s most acerbic and negative film reviews. Included are reviews of “Armageddon” (1998), “The Beverly Hillbillies” (1993) and “Police Academy” (1984).

Back in the 14th century a haberdasher was a dealer in small wares. By the late 1800s, the term had evolved to mean a purveyor of menswear, and in particular was associated with the sale of hats.

In the sport of hockey, a team might pull the goaltender out of the game in the final minutes in order to place an extra attacker on the ice. If that team’s opponents score in that situation, it is referred to as an empty net goal.

A stigma (plural “stigmata), in a social sense, is a distinguishing mark of disgrace. For example, one might have to suffer the stigma of being in prison. The term derives from the Greek “stigma”, which was a mark or brand.

“To pony up” means “to pay”. Apparently the term originated as slang use of the Latin term “legem pone” that was once used for “money”. “Legem Pone” was the title of the Psalm that was read out on March 25 each year, and March 25 was the first payday of the year in days gone by.

Guy Fieri is a restaurant owner and television personality. Fieri is known as “the face of the Food Network” as his television series on that channel is very popular.

The National Collegiate Athletic Association (NCAA) dates back to the Presidency of Theodore Roosevelt. When his son broke his nose playing football at Harvard, President Roosevelt turned his attention to the number of serious injuries and even deaths occurring in college sports. He instigated meetings between the major educational institutions leading to the formation of the Intercollegiate Athletic Association of the United States (IAAUS) in 1906, which was given the remit of regulating college sports. The IAAUS became the NCAA in 1910. The NCAA has been headquartered in Indianapolis since 1999.

18. Younger daughter of Hi and Lois, in comics : TRIXIE

36. With some unscrambling, the contents of each set of circles : PERFECT SQUARE

3. Block during rebounding, in basketball : BOX OUT

10. When some fans have to wait till : NEXT YEAR

44. Words with clip or crossroads : AT A