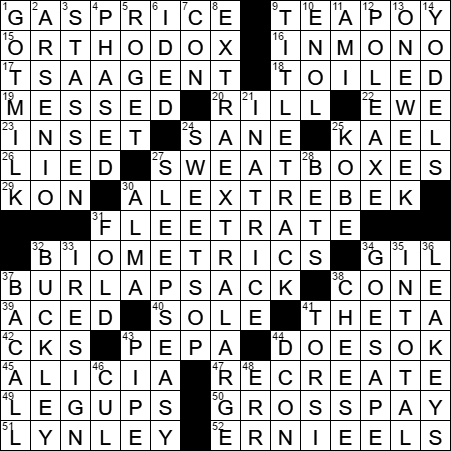 “Teapoy” is a term of Indian origin that is used in English to describe a small, three-legged table. Just because of the letters “tea” in “teapoy”, the table has come to be associated with the serving of tea.

Monophonic sound (“mono”) is sound reproduced using just one audio channel, which is usually played out of just one speaker. Stereophonic sound is reproduced using two audio channels, with the sound from each channel played out of two different speakers. The pair of stereo speakers are usually positioned apart from each other so that sound appears to come from between the two. Quadraphonic sound (4.0 surround sound) uses four audio channels with the sound played back through four speakers often positioned at the corners of the room in which one is listening.

The word “rill”, meaning a small brook or rivulet, has German roots. It has the same roots as “Rhine”, the name of the major European river.

“I Lost It at the Movies” is collection of film reviews by critic Pauline Kael that was published in one volume in 1965.

Gil Hodges was a professional baseball player and manager. Perhaps Hodges’ most celebrated achievement was managing the New York Mets team (the “Miracle Mets”) that won the 1969 World Series. Hodges died from a heart attack just a few years later in 1972, when he was only 48 years old. By the way,

Salt-n-Pepa are an all-female hip hop trio from New York, made up of “Salt” (Cheryl James), “Pepa” (Sandra Denton) and “DJ Spinderella” (Deidra Roper). Their 1991 song “Let’s Talk Sex” created quite a fuss as the lyrics explored the subject of sex, and safe sex in particular. A later version addressed the dangers of AIDS.

Alicia Keys is the stage name of Alicia Cook, an R&B and soul singer from Hell’s Kitchen in New York City.

“The Inspector Lynley Mysteries” is a entertaining BBC series that is based on mystery novels written by Elizabeth George. The stories are all set in Great Britain, although Elizabeth George is an American writer based here in California.

The golf tournament that we usually refer to as “the British Open” here in North America, is more correctly known as “The Open Championship”. The tournament has earned its somewhat haughty title as it is the oldest of the four major championships in professional golf. The Open was first played in 1860, at Scotland’s Prestwick Golf Club. That first tournament attracted a grand field of eight professional golfers, with Scotsman Willie Park, Sr. emerging victorious.

1. Ad campaign almost dismissed by its creators for grammatical inaccuracy : GOT MILK?

The “got milk?” advertising campaign was funded originally by the California Milk Processor Board and later by milk processors and dairy farmers. The “got milk?” ads encourage us to drink cow’s milk, and lots of it.

Harold Stassen was Governor of Minnesota from 1939 to 1943, and is largely remembered as a perennial candidate for the Republican nomination for US president. Stassen sought the nomination nine times in all between 1940 and 1992, and never came close to winning.

It’s thought that the lovely word “bamboozle” came into English from the Scottish “bombaze” meaning “perplex”. We’ve been using “bamboozle” since the very early 1700s.

12. Weapon similar to a halberd : POLEAXE

A poleaxe (also “poleax”) is a medieval weapon. As one might expect, it is an axe on a pole. The pole could be anything from 4 to 8 feet in length.

A halberd is weapon that is similar to a poleax. It comprises an axe blade on a pole, with a long spike above the blade. There is also a hook on the side of the pole opposite the axe blade. Halberds are still used today as ceremonial weapons by the Swiss Guard in the Vatican.

The custard apple or sugar apple is the fruit of a small deciduous tree native to the New World. It is also called a “sweetsop” in some parts of the world. The soursop, the fruit of an evergreen tree that’s related to the paw-paw, has a more sour taste.

Kobe is a city on the island of Honshu in Japan. Here is North America, the city of Kobe is perhaps most famous for its beef. And yes, basketball star Kobe Bryant is named after that very same beef.

Alma College in Alma, Michigan was founded by Michigan Presbyterians in 1886. The school has a Scottish heritage of which it is very proud. Alma has its own Scottish marching band, a Scottish dance troupe and even its own design of tartan.

That would be the card game of poker.

William F. Buckley, Jr. was an author and commentator. Buckley wrote spy novels a syndicated newspaper column. He also hosted the public affairs television show called “Firing Line” for over 33 years from 1966 to 1999.

Louis and Mary Leakey were a married couple who worked as paleoanthropologists in Africa, particularly in the Olduvai Gorge in Tanzania. In addition to their own work, the Leakey’s sponsored field research of primates in their natural habitats. The most famous of these researchers were Jane Goodall, Dian Fossey and Birutė Galdikas, a group that came to be known as Leakey’s Angels or the Trimates.

What a bombshell Lauren Bacall was, with that husky voice and her quiet, suggestive manner. Bacall was born in New York City to Jewish immigrant parents from Europe. She was actually a first cousin of Shimon Peres, the former President and Prime Minister of Israel. Famously, Bacall was married to Humphrey Bogart, from 1945 until his passing in 1957.

“Applause” is a stage musical based on the 1950 movie “All About Eve”. The musical premiered in 1970 in Broadway, with Lauren Bacall playing actress Margo Channing. “Applause” won that season’s Tony Award for Best Musical, and Bacall won the Tony for Best Actress in a Musical.

What we now call Monterey Jack cheese was originally made by Franciscan friars in Monterey, California in the 19th century. In the 1800s, a powerful landowner called David Jack started to make the same cheese as the friars in his own dairy, and marketed it as “Jack’s Cheese” and later “Monterey Jack”.

“Tank top” is another one of those terms that always catches me out, as it has a different meaning on each side of the Atlantic. In the US a tank top is a sleeveless shirt, something we would call a “vest” back in Ireland (and the US “vest” is what we call a “waist coat”). A tank top in Ireland is a sleeveless sweater, which further adds to the confusion. The name “tank top” is derived from “tank suit”, an old name for a woman’s one-piece bathing suit. The use of “tank” for the bathing suit came from “swimming tank”, an obsolete term used in the 1920s for a swimming pool.

“Frosty the Snowman” is a song that was recorded first by Gene Autry, in 1950. The song was specifically written in the hope that it would become a follow-up hit to Autry’s “Rudolph the Red-Nosed Reindeer” that topped the charts the previous year.

Even though “cul-de-sac” can indeed mean “bottom of the bag” in French, the term cul-de-sac is of English origin (the use of “cul” in French is actually quite rude). The term was introduced in aristocratic circles at a time when it was considered very fashionable to speak French. Dead-end streets in France are usually signposted with just a symbol and no accompanying words, but if words are included they are “voie sans issue”, meaning “way without exit”.

1. It can affect where you stop on a road trip : GAS PRICE

1. Ad campaign almost dismissed by its creators for grammatical inaccuracy : GOT MILK?

12. Weapon similar to a halberd : POLEAXE