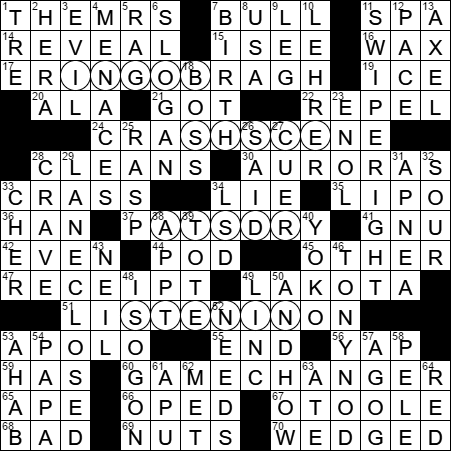 Each of today’s themed answers includes a string of letters that are circled in the grid. These strings of letters are the names of GAMES in which the order of the letters has been CHANGED:

The idiom “like a bull in a china shop” has been around since the early 1800s.

“Erin go bragh!” is an anglicization of an Irish phrase “Éirinn go Brách!”, which translates as “Ireland Forever!”

The first practical portable vacuum cleaner was invented by James Spangler in 1907. Spangler sold the patent for the design to his cousin’s husband, William Henry Hoover. Hoover then made his fortune from manufacturing and selling vacuum cleaners. Hoover was so successful in my part of the world that back in Ireland we don’t use the verb “to vacuum” and instead say “to hoover”, and a hoover is what we call a vacuum cleaner, regardless of who makes it.

Liposuction (lipo) dates back to the 1920s when it was developed by a surgeon in France. However, the procedure quickly lost favor when a French model developed gangrene after surgery. As a result it wasn’t until the mid-seventies that modern liposuction took off, after being popularized by two Italian-American surgeons in Rome.

Irish actor Peter O’Toole got his big break in movies when he played the title role in the 1962 epic film “Lawrence of Arabia”. But my favorite of O’Toole’s movies is much lighter fare, namely “How to Steal a Million” in which he stars opposite Audrey Hepburn. O’Toole never won an Oscar, but holds the record for the greatest number of Best Actor nominations without a win.

Dunkin’ Donuts started using the slogan “America Runs on Dunkin’” in 2006, and it is still around to this day.

Dunkin’ Donuts was founded in 1950 in Quincy, Massachusetts. Now the chain has over 15,000 restaurants in almost 40 different countries. The company’s biggest competitor is actually Starbucks, as over half of Dunkin’ Donuts’ revenue comes from coffee, and not donuts.

Jim Lehrer is a former news anchor with PBS for the “PBS Newshour” show. Lehrer is also associated with presidential debates and has moderated 12 such events.

Robert MacNeil is a retired Canadian journalist who co-anchored “The MacNeil/Lehrer Report” on PBS for twenty years.

“Honcho” is a slang term for a leader or manager. The term comes to us from Japanese, in which language a “hancho” is a squad (han) leader (cho).

The “zipper merge” or “late merge” is encouraged by most traffic authorities when two lanes of traffic are merging into one. The alternative “early merge”, where cars move out of the lane that is closing before reaching the merge point, tends to be discouraged. The favored technique is to use both lanes until the merge point, and then alternate (zipper) from each lane through the merge itself. That said, one should always obey whatever instructions are given by the traffic authorities at the scene. And I know, a lot of people think it rude not to merge early …

Chaz Bono is the only child of the singers Sonny and Cher (although they both have children from other marriages). Chaz was named Chastity Sun Bono at birth and told her parents at the age of 18 that she was a lesbian. More recently Bono underwent gender reassignment surgery, and Chastity has legally changed his name to Chaz.

The artist Yoko Ono operates the website ImaginePeace.com. I checked it out once and found these lovely two quotes:

I saw Neil Diamond in concert back in the mid-nineties, and I must say he does put on a great show. His voice is cracking a bit, but that didn’t seem to spoil anyone’s enjoyment. I’ve also seen Diamond interviewed a few times on television, and I wouldn’t say he has the most scintillating of personalities.

The most famous whale-hunting ship in fiction has to be Herman Melville’s Pequod, which was featured in his novel “Moby Dick”. The Pequod is a skippered by the maniacal Captain Ahab, and the young chief mate is the thoughtful and intellectual Starbuck. Starbuck’s name was lifted and used by a Seattle-based coffee company.

“Papa Was a Rollin’ Stone” is a 1971 song that was originally released by a Motown act called the Undisputed Truth. The song was re-released the following year by the Temptations, and became a number-one hit. The Temptations version is an impressive twelve minutes in length, with an instrumental introduction that lasts almost four minutes.

“Pelé” is the nickname of Edson de Nascimento, a soccer player who has used the name “Pelé” for most of his life. Pelé is now retired, and for my money was the world’s greatest ever player of the game. He is the only person to have been part of three World Cup winning squads, and is a national treasure in his native Brazil. One of Pele’s nicknames is “O Rei do Futebol” (the King of Football).

47. Need for a return, usually : RECEIPT

60. Ump’s controversial call, perhaps … and a hint to this puzzle’s circles : GAME CHANGER