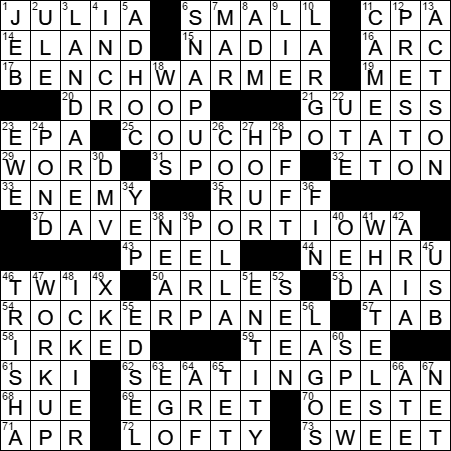 Each of today’s themed answers starts with a type of SEATING:

The Environmental Protection Agency (EPA) was set up during the Nixon administration and began operation at the end of 1970.

The Quad Cities are a group of five cities located on the Iowa-Illinois border and on either side of the Mississippi River. The Iowa cities are Davenport and Bettendorf, and the Illinois cities are Rock Island, Moline and East Moline. The grouping was originally just three cities (Davenport, Rock Island and Moline) and used the name “Tri-Cities”. This changed to “Quad Cities” as East Moline grew to a size comparable to the original three cities. With the growth of Bettendorf, the list of linked cities became five. There has been talk of changing the name to “Quint Cities”, but it doesn’t seem to be catching on.

The word “davenport”, when used to mean a sofa, is one of those generic terms that evolved for an item from the name of a prominent manufacturer. The long-gone Davenport Company sold a lot of furniture in the midwest and upstate New York, so the term is especially common in that part of the country.

Jawaharlal Nehru was the very first prime minister of India, serving from 1947-64. Nehru was basically the heir to his mentor Mahatma Gandhi. Nehru’s only daughter Indira, also became prime minister (known as Indira Gandhi through marriage, though she was no relation to Mahatma).

I remember Twix bars from way back in 1967 when they were introduced in the British Isles. Twix bars made it to the US over a decade later, in 1979. The name “Twix” is a portmanteau of “twin bix”, short for “twin biscuit”.

The rocker panels (sometimes just “rockers” or “sills”)) are the sections of a car’s body that run right under the door openings. The term “rocker panel” is a throwback to the days of horse-drawn carriages. Back then, a carriage was often constructed like a box with a smaller box below into which the seated passengers placed their feet. Such a design was deemed awkward-looking and inelegant and so panels were added below the doors to give a curved, appealing look to the base of the carriage. The resulting curved outline at the base of the carriage was reminiscent of the base of a rocking cradle, leading to the term “rocker panel”.

Jeb Bush is the son of President George H. W. Bush, and the brother of President George W. Bush. I always thought that Jeb was an American nickname for James or Joseph but I must be wrong, because George and Barbara’s son John Ellis Bush is called “Jeb”. A kind blog reader has suggested the the name “Jeb” may have been chosen as JEB are the initials of John Ellis Bush.

“Largo” is a instruction to play a piece of music with a very slow tempo. “Largo” is the Italian word for “broadly”.

On a musical score, the instruction “presto” is used to indicate a fast tempo. “Presto” is the Italian word for “quick”.

Trisha Yearwood is an American country music singer. She was discovered by the man who is now her third husband, country music legend Garth Brooks.

Lagos is a port and the biggest city in Nigeria. Lagos used to be the country’s capital, until it was replaced in that role in 1991 by Abuja, a city built for just for this purpose. Lagos is also the most populous city in the whole of Africa (followed by Cairo in Egypt).

21. Many a multiple-choice test answer : GUESS

62. Wedding reception headache … and what the starts of the answers to starred clues constitute? : SEATING PLAN

47. Generate via exercise, as a sweat : WORK UP