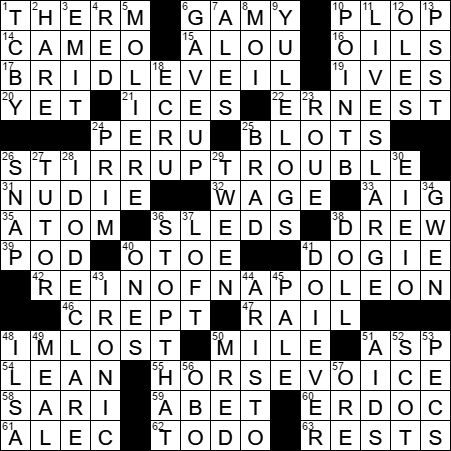 Theme: Mr. Ed Would Enjoy This

Each of today’s themed answers sounds like a common phrase, but actually makes an equine reference:

Even in my day, a cameo role was more than just a short appearance in a movie (or other artistic piece). For the appearance to be a cameo, the actor had to playing himself or herself, and was instantly recognizable. With this meaning it’s easy to see the etymology of the term, as a cameo brooch is one with the recognizable carving of the silhouette of a person. Nowadays, a cameo is any minor role played by a celebrity or famous actor, regardless of the character played.

Matty Alou played major league baseball, as did his brothers Jesus and Felipe, and as did Felipe’s son Moises.

Charles Ives was one of the great classical composers, and probably the first American to be so recognized. Sadly, his work largely went unsung (pun intended!) during his lifetime, and was really only accepted into the performed repertoire after his death in 1954.

Piano Sonata No. 2 by Charles Ives is often referred to as the “Concord Sonata”. It is so called because it was inspired by the works of the 19th-century Concord writers (such as Louisa May Alcott, Ralph Waldo Emerson, Henry David Thoreau and Emily Dickinson).

Arequipa is located in the south of Peru and is the second-most populous city in the country, after the capital Lima. Arequipa has been the center of many uprisings since the city was founded in 1540, and was declared the nation’s capital on two occasions, in 1835 and in 1883.

The Troubled Asset Relief Program (TARP) was a step taken by the Bush administration to strengthen financial institutions during the subprime mortgage crisis of 2008. The idea was for the US government to “save” the banking sector by buying up all their bad mortgages.

“Dogie” (sometimes “dogy”) is cowboy slang for a motherless calf in a herd.

42. Something well in hand at Waterloo? : REIN OF NAPOLEON (sounds like “reign of Napoleon”)

Napoleon Bonaparte (Napoleon I) led a series of conflicts against several European powers from 1803 until 1815, which are referred to collectively as the Napoleonic Wars. In all, Bonaparte fought about sixty battles throughout his military career, losing seven in all. Perhaps the most significant of those defeats was as the Battle of Waterloo in 1815, after which Napoleon was exiled to the British island of St. Helena in the South Atlantic, where he died in 1821.

“Bollywood” is the informal name given to the huge film industry based in Mumbai in India. The term “Bollywood” is a melding of “Bombay”, the old name for Mumbai, and “Hollywood”.

Alec Waugh was the older brother of the more famous Evelyn Waugh. Both were successful novelists (Evelyn of “Brideshead Revisited” fame), but what I like about Alec is that he supposedly invented the cocktail party. He invited his friends around “for tea” in the twenties, and served them all rum swizzles instead!

TCBY is a chain of stores selling frozen yogurt, founded in 1981 in Little Rock, Arkansas. The acronym TCBY originally stood for “This Can’t Be Yogurt”, but this had to be changed due to a lawsuit being pressed by a competitor called “I Can’t Believe It’s Yogurt”. These days TCBY stands for “The Country’s Best Yogurt”.

Molière was the stage name of French actor and playwright Jean-Baptiste Poquelin. It is amazing how well the comedies of Molière, written in the 1600s, entertain us on stage today. Among his best-known plays are “The Misanthrope”, “The School for Wives” and “Tartuffe or the Hypocrite”.

6. Allowed from the mound : GAVE UP

“Fútbol” is Spanish for “football”.

“Roue” is a lovely word, I think, describing a less than lovely man. A roue could otherwise be described as a cad, someone of loose morals. “Roue” comes from the French word “rouer” meaning “to break on a wheel”. This describes the ancient form of capital punishment where a poor soul was lashed to a wheel and then beaten to death with cudgels and bars. I guess the suggestion is that a roue, with his loose morals, deserves such a punishment.

A snap-brim hat is one with the brim turned up in the back and down in the front, and usually with a dented crown.

The term “tween” is now used to describe preadolescence, the years “between” 8 and 12 years of age.

The idiomatic phrase “blue blood” applies to someone of noble descent. The phrase is a translation from the Spanish “sangre azul”, which was applied to the royal family in Spain. The notion is that someone of noble birth does not have to work outdoors in the fields, and so has untanned skin. The veins showing in the skin had “blue blood”, whereas those veins were masked by the darker skin of the peasant classes.

Thanes were Scottish aristocrats. The most famous thanes have to be the Shakespearean characters Macbeth (the Thane of Glamis, later Thane of Cawdor, and later King of Scotland) and MacDuff (the Thane of Fife). Other thanes in “Macbeth” are Ross, Lennox and Angus, as well as Menteith and Caithness.

The original Muscle Beach was located on the south side of Santa Monica Pier in Southern California. Bodybuilders started working out on the beach back in the 1930s when exercise equipment was installed there as part of the WPA program. Some of the equipment was removed in the fifties, so the bodybuilding community shifted to the Venice Beach Weight Pen. That area was developed and is now known as Muscle Beach Venice.

42. Something well in hand at Waterloo? : REIN OF NAPOLEON (sounds like “reign of Napoleon”)

6. Allowed from the mound : GAVE UP

10. Destination in a simple itinerary : POINT B