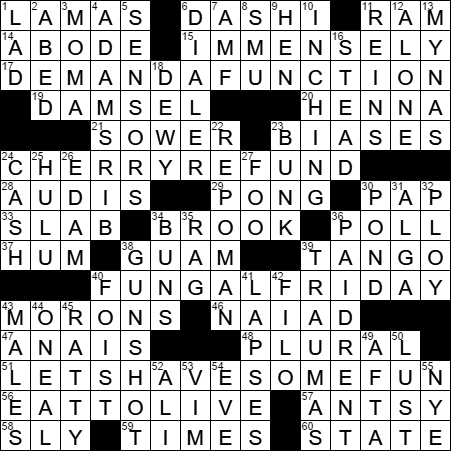 Theme: Let’s Have Some Fun

Each of today’s themed answers is a common phrase with the letters FUN inserted:

Dashi is a style of cooking stock used in Japanese cuisine. Most famously, dashi is the stock that is used as the base for miso soup. Traditional dashi is a fish stock to which is added edible kelp called kombu and shavings of preserved and fermented skipjack tuna called katsuobushi.

15. How gourmands enjoy their food : IMMENSELY

A gourmand is someone who takes great pleasure in consuming food and drink, often eating and drinking to excess. The related term “gourmet” refers to someone who has a refined palate.

A damsel is a young woman, often referring to a lady of noble birth. The term came into English from the Old French “dameisele”, which had the same meaning. The modern French term is “demoiselle”, which in turn is related to the term of address “mademoiselle”.

24. Compensation for an incomplete sundae? : CHERRY REFUND (from “cherry red”)

One meaning of “pap” is soft or semi-liquid food for babies and small children. “Pap” comes into English via French, from the Latin word used by children for “food”. In the 1500s, “pap” also came to mean “an oversimplified” idea. This gives us a usage that’s common today, describing literature or perhaps TV programming that lacks real value or substance. Hands up those who think there’s a lot of pap out there, especially on television …

“Twaddle” is a trivial talk, and is a word that has been around since the late 1700’s. It probably evolved from the earlier term “twattle” that had the same meaning.

38. Territory east of the Philippines : GUAM

Guam is a US territory in the western Pacific Ocean, the largest of the Mariana Islands. Guam is also the first territory in the United States to see the sun rise on any particular day. As such, the territory has adopted the motto, “Where America’s day begins”. During WWII, the US territory of Guam was occupied by the Japanese for 31 months until it was liberated in the Battle of Guam in July 1944. Of the 18,000 Japanese men holding the island, only 485 surrendered, so almost all perished in the invasion. One Japanese sergeant hid out on the island for an incredible 28 years, finally surrendering in 1972!

When the Spanish explorer Ruy Lopez de Villalobos discovered the islands of Leyte and Samar, he named them Felipinas, after King Philip II of Spain. Eventually, the name was used for the whole archipelago, becoming what we know in English as the Philippines.

40. When a restaurant offers its weekly mushroom specials? : FUNGAL FRIDAY (from “gal Friday”)

In Daniel Defoe’s 1719 novel “Robinson Crusoe”, the castaway encounters a companion that Crusoe calls “Friday”, because the two first met on that day. Friday soon becomes his willing servant. This character is the source of our terms “Man/Guy Friday” and “Girl/Guy Friday”, which are used to describe a particularly competent and loyal assistant.

The Naiads of Greek mythology were water nymphs, associated with fountains, wells, springs and streams. The saltwater equivalents of the freshwater Naiads were the Oceanids.

Anaïs Nin was a French author, famous for her journals that she wrote for over sixty years from the age of 11 right up to her death. Nin also wrote highly regarded erotica and cited D. H. Lawrence as someone from whom she drew inspiration. Nin was married to banker and artist Hugh Parker Guiler in 1923. Decades later in 1955, Nin married former actor Rupert Pole, even though she was still married to Guiler. Nin and Pole had their marriage annulled in 1966, but just for legal reasons, and they continued to live together as husband and wife until Nin passed away in 1977.

“Eat to Live: The Amazing Nutrient-Rich Program for Fast and Sustained Weight Loss” is a 2003 book written by Dr. Joel Fuhrman. A central premise of the book is the formula “health = nutrients/calories”. I suppose one could infer from that formula that a diet based on nutrient-rich calories promotes health.

And here it is! My favorite movie of all time. “Adam’s Rib” is a classic romantic comedy starring the powerful duo, Spencer Tracy and Katharine Hepburn, playing two lawyers married to each other. Inevitably, the married couple have to take opposite sides in a high-profile court case, and hilarity ensues. The film is an interesting exploration of the roles of men and women in 1949 American society.

AMF Bowling Centers, Inc. is an operator of bowling alleys, and is in fact the largest such company in the world.

Southern Methodist University (SMU) is located in University Park, Texas (part of Dallas), and was founded in 1911. The school’s athletic teams are known as the Mustangs. Also, SMU is home to the George W. Bush Presidential Library.

Hulu.com is a website providing streaming video of full television shows. It is a joint venture of NBC and Disney, and so features a lot of their content. The service is free and is supported by advertising, but you can sign up for a premium subscription and get access to more shows. A lot of younger folks seem to use it a lot …

Netflix was founded in Los Gatos, California in 1997 as a DVD rental company that sent out titles by mail. Netflix no longer focuses on distribution by mail, and instead provides programming on demand. The company is now making a big name for itself producing films and TV programs.

Foo Fighters are described as an alternative rock band, one formed in 1994 by the drummer from Nirvana, Dave Grohl. The term “Foo fighters” originally applied to unidentified flying objects reported by allied airmen during WWII. Spooky …

The word “foist”, meaning “to pass off as genuine”, comes from the Dutch word meaning “take in hand”. The original concept came from playing dice, in which one die was held surreptitiously in one hand.

15. How gourmands enjoy their food : IMMENSELY

24. Compensation for an incomplete sundae? : CHERRY REFUND (from “cherry red”)

38. Territory east of the Philippines : GUAM

40. When a restaurant offers its weekly mushroom specials? : FUNGAL FRIDAY (from “gal Friday”)