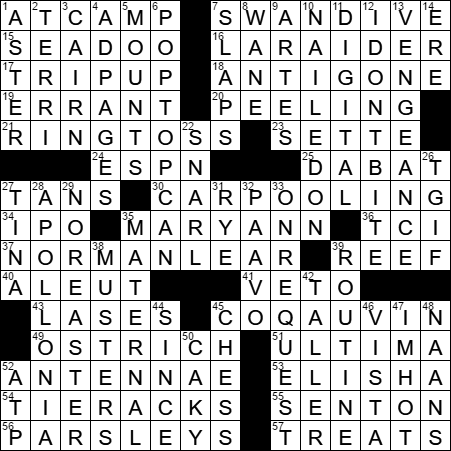 A swan dive is one in which the diver holds the arms outspread until just before hitting the water. Over on the other side of the Atlantic, the same dive is often called a swallow dive. Sometimes we use the verb “to swan-dive” to describe something that plummets, suddenly decreases. The stock markets swan-dives every so often …

Sea-Doo is a brand name of personal watercraft (PWC). Other well-known brands are Jet Ski and WaveRunner.

“Antigone” is a tragedy written by Greek playwright Sophocles and first performed in 442 BC. Antigone is the daughter of King Oedipus of Thebes, and was born out of the incestuous relationship of the king with his mother Jocasta.

Back at the 1893 World’s Columbian Exposition held in Chicago there were rides and amusements that were all concentrated in one place, away from the exhibition halls. The rides included the world’s first Ferris wheel, and one could also see Buffalo Bill Cody’s Wild West show. All these attractions were located in the mile-long linear park on the South Side of Chicago known as Midway Plaisance. Ever since then, the attractions at any fair have been located at “the midway”.

Prior to the founding of the city of Rome, supposedly there were seven separate settlements located atop of seven hills east of the River Tiber. Tradition dictates that Romulus founded Rome on one of these hills, Palatine Hill. As the city grew, it came to encompass all seven existing settlements. The most famous hill in modern-day Rome is probably Vatican Hill, but it lies outside of the walled ancient city.

“30 for 30” is a series of ESPN documentary films that has aired since 2009. The series originated as a celebration of the ESPN’s 30th birthday. To recognize that anniversary, the network commissioned 30 filmmakers to make 30 one-hour films covering the big stories in ESPN’s 30-year history. The series was so well received that ESPN continues to make similar documentaries using the “30 for 30” umbrella title.

In some parts of the country one sees high-occupancy vehicle lanes (HOV lanes). Out here in California we refer to them as carpool lanes.

The roots of the New York Stock Exchange (NYSE) go back to 1792 when a group of 24 stock brokers set up the New York Stock & Exchange Board. They did so in an agreement signed under a buttonwood tree outside 68 Wall Street. That document became known as the Buttonwood Agreement. Today, the NYSE is located in National Historic Landmark building with the address 11 Wall Street in Lower Manhattan, New York City.

Mary Ann Esposito is celebrity chef. Her PBS show “Ciao Italia with Mary Ann Esposito” has been on the air since 1989, making it the longest-running cooking program in the US.

Tele-Communications, Inc (TCI) was the largest provider of cable television service in the US for a while. The company was founded in 1968 and was headquartered in Denver. TCI was bought by AT&T in 1999.

Norman Lear wrote for and produced some great television shows, including “All in the Family”, Sanford and Son” and “The Jeffersons”. He also did some film work, including writing and producing the great 1967 movie “Divorce American Style”.

The very popular sitcom called “The Jeffersons” ran from 1975 until it came to an abrupt end in 1985. CBS cancelled the show without even allowing a series finale that “wrapped things up”. In fact the lead actor, Sherman Hemsley, first learned of the show’s cancellation in the newspaper.

Unalaska Island is one of the Aleutian chain of islands off the coast of Alaska. Dutch Harbor, located within the city of Unalaska, is the largest fisheries port in the whole of the United States.

The French word “coq” actually means rooster, but a more tender bird is usually chosen for the classic French dish “coq au vin”. The most common wine used for the “vin” is burgundy, but sometimes another red wine is chosen, and you can also find on a menu “coq au Champagne” and “coq au Riesling”.

In Britain, parsley is listed as one of the four essential herbs. And those would be “parsley, sage, rosemary and thyme”.

Michaelmas is the feast of Saint Michael the Archangel, a day in the Western Christian calendar. Michaelmas is September 29th every year, and is associated with the beginning of fall.

Terri Gibbs is a country music singer. Gibbs had thirteen singles that made the Billboard country singles charts in the eighties. Gibbs was born blind.

A cairn is a man-made pile of stones that can have various uses. A cairn might be a prosaic trail marker, or a distinctive landmark or monument. Our term “cairn” derives from the Gaelic “carn” meaning “rocky hill, heap of stones”.

The celebratory gesture that we call a “high five” is said to have been invented by former baseball players Dusty Baker and Glenn Burke when they were both playing for the Los Angeles Dodgers in the later 1970s.

Cancún is a city and island on the east coast of Mexico, on the other side of the Yucatan Channel from Cuba. The city is growing rapidly due to its booming tourist business. Cancún is the center of what’s often called “The Mexican Caribbean” or the “Mayan Riviera”.

Tina Turner is the stage name used by Anna Mae Bullock, the “Queen of Rock ‘n’ Roll”. Turner has always loved Europe and moved there in the eighties. She now splits her time between her homes in England, France and Switzerland.

In the 1972 film “The Godfather”, Michael Corleone’s first wife is Apollonia Vitelli. Apollonia was played by Italian actress Simonetta Stefanelli.

There are conflicting stories about the origin of the Reuben sandwich. One is that it was invented around 1914 by Arnold Reuben, an immigrant from Germany who owned Reuben’s Deli in New York.

Paavo Nurmi was one of a group of Finnish runners to earn the nickname “the Flying Finn”. Nurmi dominated middle and long distance running in the 1920s. He was the most successful athlete at the 1924 Paris Olympics, winning five gold medals.

The musical “Chess” is a very enjoyable show, with music written by Björn Ulvaeus and Benny Andersson (of ABBA fame) and lyrics by Tim Rice (of “Jesus Christ Superstar” and “Evita” fame). The story is about two chess masters, one American and one Russian, who face off against each other during the Cold War. Much of the action takes place in Bangkok at a World Championship Tournament, and there’s a woman, and a love triangle. I saw the show decades ago in the north of England, and recommend it …

Windows XP, Windows Vista and Windows 7, 8 and 10; they’re all based on the Windows NT operating system. There is a common perception that Windows NT (WNT) takes its name from VMS, an earlier operating system developed by Digital Equipment Corporation. “WNT” is what’s called a “Caesar cypher” of “VMS”, as you just augment the letters of VMS alphabetically by one to arrive at WNT. Bill Gates disputes this derivation of the name, and in a 1998 interview stated that the NT originally stood for N-Ten and that the marketing folks at Microsoft revised history by changing it to “New Technology”.

Novak Djokovic is a Serbian tennis player and former world No. 1 ranked player. Djokovic is quite the character off the court it seems and he is very popular on the talk-show circuit, all around the world. It helps that Djokovic is fluent in several languages.

1. Gone for the summer, perhaps : AT CAMP

10. Attached by pounding : NAILED ON