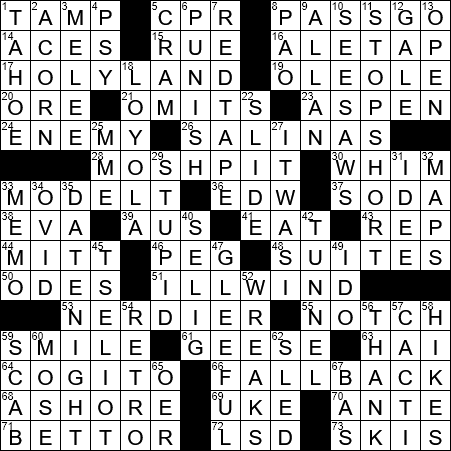 Each of today’s themed answers comprises two words, the second of which often precedes FALL:

“To tamp” means to pack down tightly by tapping. “Tamp” was originally used to specifically describe the action of packing down sand or dirt around an explosive prior to detonation.

Salinas is a California city located south of the San Francisco Bay Area, just a few miles from the Pacific Ocean. Salinas was the hometown of Nobel Prize winning author John Steinbeck, and was the setting of his 1952 novel “East of Eden”.

“Whim” meaning “sudden fancy” is such a lovely word, and one that we’ve been using in English since the 1640s. “Whim” is actually a shortened form of “whimwham” which has a similar meaning and has been around since the early 1500s.

Originally, a geek was a sideshow performer, perhaps at a circus. We use the term today for someone regarded as foolish or clumsy, and also for someone who is technically driven and expert, but often socially inept.

Yokohama is the second-most populous city in Japan. Yokohama lies on Tokyo Bay and is just a 40-minute drive from the nation’s capital.

66. “Spring forward” partner (a reminder for November 5th) … and what the last word of each answer to a starred clue can literally have : FALL BACK

Edgar Allan Poe lived a life of many firsts. Poe is considered to be the inventor of the detective-fiction genre. He was also the first notable American author to make his living through his writing, something that didn’t really go too well for him as he was always financially strapped. In 1849 he was found on the streets of Baltimore, delirious and in dire need of medical help. Poe died a few days later in hospital at 39 years of age.

Saint Ignatius of Loyola (also known as Inigo Lopez de Loyola) was a Spanish knight from a noble family in the Basque region of Spain. He left behind his easy life to become a hermit and a priest, and eventually founded the Society of Jesus (The Jesuit order of the Roman Catholic church).

The much debated statement “it is I” is actually grammatically correct, and should not be “corrected” to “it is me”. Traditionally, pronouns following linking verbs, such as “is”, “appear” and “seem”, are written in the nominative case. Examples are:

The Roman poet Publius Ovidius Naso is known today simply as Ovid. Ovid is usually listed alongside the two other great Roman poets: Horace and Virgil. Although he was immensely popular during his own lifetime, Ovid spent the last ten years of his life in exile. He fell foul of Emperor Augustus, although what led to this disfavor isn’t truly understood.

“Old Possum’s Book of Practical Cats” is a 1939 collection of poems by T. S. Eliot. The collection of whimsical poetry was a favorite of composer Andrew Lloyd Webber when he was a child. Webber used Eliot’s poems as inspiration for this megahit musical “Cats”.

Mose Allison is a pianist and singer of the jazz blues genre of music. Allison was born, raised and educated in Mississippi, but launched and maintained his career in New York.