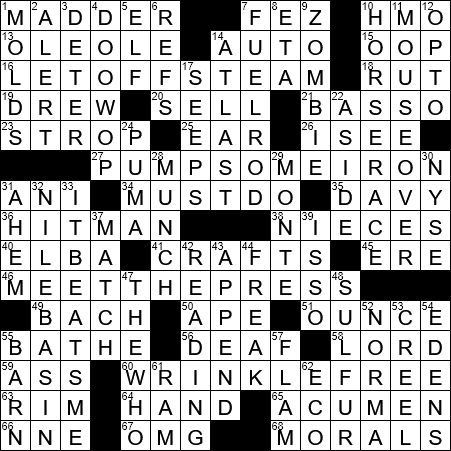 Each of today’s themed answers ends with things used to make a shirt WRINKLE-FREE:

A fez is a red cylindrical hat worn mainly in North Africa, and by Shriners here in the US. The fez used to be a very popular hat across the Ottoman Empire. The etymology of “fez” is unclear, although it might have something to do with the Moroccan city named Fez.

“Alley Oop” is a comic strip that ran for four decades starting in 1932. “Alley Oop” was drawn by V. T. Hamlin. The title character lived in the prehistoric kingdom of Moo, although for much of the strip’s life, Alley Oop had access to a time machine. Alley Oop also had a girlfriend called Ooola. I had assumed that Ooola’s name was a play on “hula hoop”, but that wasn’t invented until the 1950s (a kind blog reader informs me) …

The “Nancy Drew” mystery stories were produced by the Stratemeyer Syndicate. The founder of the Syndicate hired a team of writers to produce the “Nancy Drew” novels, but listed the author of each book as the fictional Carolyn Keene.

J. S. Bach composed a set of 24 preludes and fugues published as a book in 1722, intended to be used as exercises for students of music. He composed another set of 24 in 1742, and the whole collection is today known as the “Well-Tempered Clavier”, the title of the original book. A “clavier” is a keyboard of a musical instrument.

According to the four Gospels in the Bible, Jesus made a triumphal entry into Jerusalem after having raised Lazarus from the dead. He descended from the Mount of Olives and rode into the city on an ass or a donkey.

Palm Sunday is a celebration in the Christian tradition that falls on the Sunday before Easter Sunday. The day commemorates the triumphal entry of Jesus into Jerusalem, soon after he raised Lazarus from the dead. The faithful carry palms on the day, a reference to the palms scattered in front of Jesus by the welcoming crowd. In many churches, the palms are saved from Palm Sunday and then burned on Shrove Tuesday, The ash from the palms is then used to anoint the faithful on the next day: Ash Wednesday.

A parable is story told to illustrate a lesson or principle. It is similar to a fable, but differs in that a fable uses mainly animals as characters, and a parable uses humans.

“Munchkin” is a word that we use quite commonly these days, usually to describe a young child. The first Munchkins were characters created by L. Frank Baum in his book “The Wonderful Wizard of Oz”, published in 1900.

9. “Shaun of the Dead” creature : ZOMBIE

Saucony is a sportswear manufacturer that is known mainly making athletic shoes. The company was founded in 1898 on the banks of Saucony Creek in Pennsylvania, hence the name.

The New York Stock Exchange (NYSE) is nicknamed the “Big Board”.

Gunpowder is the earliest known explosive chemical. Also called “black powder”, it is a mixture of sulfur, charcoal and saltpeter (i.e. potassium nitrate). The saltpeter is a powerful oxidizing agent, providing the oxygen to burn the sulfur and charcoal, which acts as the fuel in the mixture. Gunpowder was invented by the Chinese in 8th century.

“Norma” is an opera written by Vincenzo Bellini that was first performed in 1831. One aria from the work is “Casta diva”, which is one of the most popular arias of the 1800s.

“Flim-flam” (sometimes “flam”) is another word for a confidence trick. The term has been in use since the 1500s, would you believe?