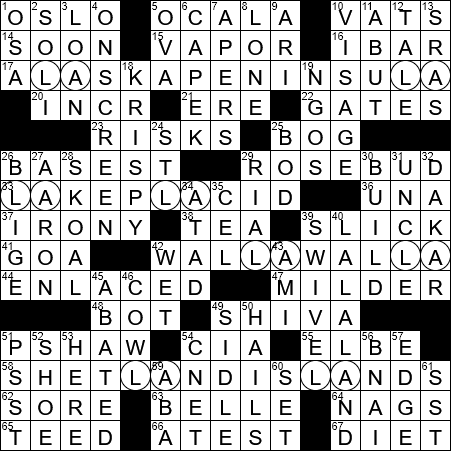 Themed answers are LAND locations that include two incidents of the letter sequence LA. Those “LA” sequences are circled in the grid:

The Alaska Peninsula is the 500-mile long peninsula that stretches from the Alaskan mainland out to the Aleutian Islands. The peninsula separates Bristol Bay in the Bering Sea to the northeast from the Pacific Ocean to the south.

A central plot line in the 1941 movie “Citizen Kane” is a newsreel reporter’s quest to find the meaning of the dying word “Rosebud” spoken by the title character. Spoiler Alert … it is revealed at the end of the movie that “Rosebud” is the name of the sled used by Kane in his childhood, which was the only period of his life in which he was really happy.

Beautiful Lake Placid in the Adirondack Mountains of New York State borders the village of Lake Placid, which famously was host of the 1932 and 1980 Winter Olympics. Here in the US, the most memorable event of the 1980 Winter Games was the “Miracle on Ice”, in which an amateur US hockey team beat what was in effect a professional USSR team, and then went on to win gold. A lesser known fact from the 1980 Games is that the Lake Placid Middle/High School served as a private bar for the Olympics. It is the only high school in the US to have been issued a license to serve alcohol.

The famous destruction of tea in Boston Harbor to protest against the Tea Act took place on December 16, 1773. The action was referred to as the “destruction of the tea” for decades, and it wasn’t until 1834 that the term “Boston Tea Party” first appeared in print.

The Washington city of Walla Walla used to be called Steptoeville. It was named for Edward Steptoe, an officer in the US Army who served in the Indian Wars. Walla Walla is a Native American phrase meaning “place of many waters”.

“Bot” is an alternative name for a robot.

That would be the “belle of the ball”.

“Visage” is the French word for “face”, and is a term we’ve imported into English to mean “face” or “facial expression”.

“A Tale of Two Cities” by Charles Dickens is the most printed book that was originally written in English. The novel was first published in 1859 in 31 weekly installments in a literary periodical called “All the Year Round”, which Dickens himself produced. The “two cities” in the title are London and Paris.

The city of Saint Louis, Missouri was founded by French explorers in 1763. Sitting on the Mississippi River it grew into a very busy port. By the 1850s was the second busiest port in the country, with only New York moving more freight.

Mary J. Blige is a singer-songwriter from the the Bronx, New York. Her best known album is probably “My Life”, released in 1994. Blige is also making a name for herself as an actress, and was nominated for several awards for her performance in the 2017 film “Mudbound”.

“Mudbound” is a 2017 film based on a 2008 novel of the same name by “Hillary Jordan”. The plot centers on two WWII veterans returning home to rural Mississippi.

“Rial” is the name of the currency of Iran (as well as Yemen, Oman, Cambodia and Tunisia). Generally, there are 1,000 baisa in a rial.

A cowl is a long garment with a hood that is primarily worn by monks in the the Christian tradition.