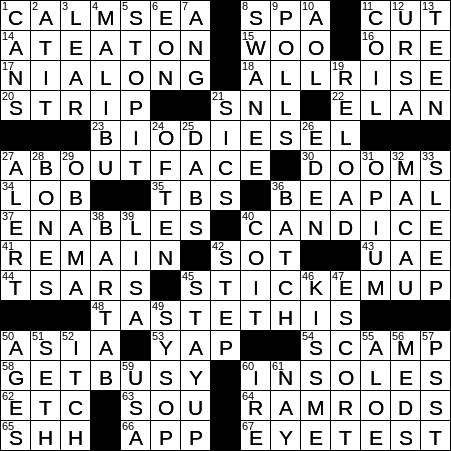 Themed clues are common types of order, but each has been reinterpreted as an imperative:

Biodiesel is a fuel made from vegetable oil or animal fat. The first diesel engine (made by Rudolf Diesel) ran on biodiesel, specifically peanut oil.

Dubai is one of the seven Emirates that make up the federation known as the United Arab Emirates (UAE). The two largest members of the UAE (geographically) are Dubai and Abu Dhabi, the only two of the seven members that have veto power over UAE policy.

Marco Polo was a merchant from Venice and a famous traveler throughout Asia. Polo journeyed with his father and uncle on an epic tour of Central Asia and China that lasted 24 years. Marco tends to be the member of the party we remember today though, because it was he who documented their travels in a book called “Il Milione”.

The American word “scalawag” meaning “rogue” was coined as a nickname for southern white people who supported reconstruction after the Civil War.

A ramrod is a stick that is inserted into the barrel of an older firearm in order to pack the bullet or ball tightly against the charge of gunpowder. A ramrod can also be used to push a cleaning rag through the barrel of a gun.

Malibu is a beach city in Southern California that is known as home to many Hollywood movie stars.

“Old Folks at Home” is a minstrel song that dates back to 1851. Written by Stephen Foster, the song is also known as “Swanee River”, and is the state song of Florida. The song’s narrator is African slave, and the original lyrics use very offensive terminology. “Old Folks at Home” remains the state song of Florida, although the lyrics were cleaned up in 2008.

Sic ’em is an attack order given to a dog, one instructing the animal to growl, bark or even bite. The term dates back to the 1830s, with “sic” being a variation of “seek”.

29. President between Bush and Trump : OBAMA

Despite rumors to the contrary, Barack Hussein Obama II was indeed born in Hawaii. Future US President Obama was born on August 4, 1961 at Kapi’olani Maternity & Gynecological Hospital in Honolulu, Hawaii.

The opium poppy is the source of the narcotic alkaloids known as opiates. To produce opiates, the latex sap of the opium poppy is collected and processed. The naturally-occurring drugs of morphine and codeine can both be extracted from the sap. Some synthesis is required to make derivative drugs like heroin and oxycodone.

Coit Tower is a renowned memorial in San Francisco that sits atop Telegraph Hill. The full name of the structure is the Lillian Coit Memorial Tower, recognizing a generous bequest to the city by wealthy socialite Lillie Hitchcock Coit. There is an urban myth in these parts that the tower was designed to resemble the nozzle of a fire hose, as Lillie used to like chasing fires and hanging out with firefighters.

Seth MacFarlane is best known for creating the very successful (although they don’t get my vote!) animated TV shows “Family Guy” and “American Dad!”. My kids love ’em …

“Sibilant” is a lovely word that describes a sound of speech, i.e. the sound of an “s” or “z”, a hissing sound. The word “sissies”, for example, has three sibilant sounds.