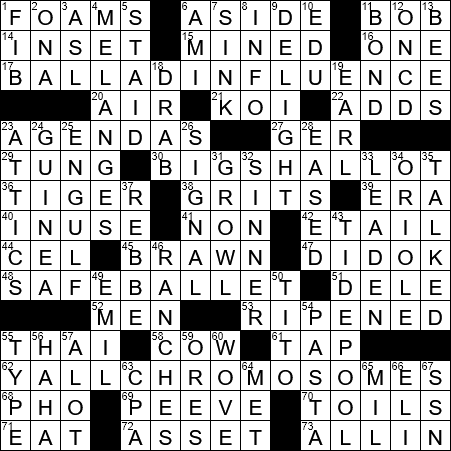 Today’s Reveal Answer: All In

Themed answers are common phrases with the letters “ALL” inserted:

Early in William Shakespeare’s play “Hamlet”, the title character utters the aside “A little more than kin, and less than kind”. Prince Hamlet’s disparaging remark is a reference to his uncle Claudius, the new king of Denmark. Hamlet’s opinion of his uncle is well-deserved, as Claudius had secretly poisoned the prince’s father in order to seize the throne.

Tung oil is obtained from the tung tree by pressing the seed found within the tree’s nuts. The oil is used as a component in varnish for wood finishing.

Amazon.com is the largest online retailer in the world. It is also the most largest Internet company in the world by revenue. The company was founded in 1994 by Jeff Bezos, in his garage in Bellevue, Washington. I’m a big fan of Amazon’s approach to customer service …

48. Classical dance minus the lifting, throwing, and such? : SAFE BALLET (“all” in “safe bet”)

Ballet is a type of dance that originated in Italy during the Renaissance. The term “ballet” ultimately derives from the Greek “ballizo” meaning “to dance”.

Niccolò Paganini was a famed Italian violinist and composer. Paganini was perhaps the most celebrated violinist of the 19th century. His most famous composition has to be his Caprice No. 24 in A minor, Op. 1. This work is the basis for many derivative masterpieces by other composers, including the wonderful “Rhapsody on a Theme of Paganini” by Rachmaninoff, and the “Variations on a Theme of Paganini” by Brahms.

“Mélange” is the French word for “mixture”.

Something described as staid is unwavering, fixed. This usage expanded to mean “sober, sedate”. The term dates back to the 16th century, and comes from verb “to stay”. “Staid” is a rewriting of the past participle “stayed”.

The British coin known as a “guinea” was minted between 1663 and 1814. The guinea was originally worth one pound sterling, but its value increased as the value of gold increased relative to silver. The value was eventually fixed in 1816 at twenty-one shillings when it was withdrawn from circulation and the pound was established as the major unit of currency. Even though the guinea coin stopped circulating soon after 1816, the term “guinea” continued to be used to indicate an amount of 21 shillings, especially when pricing certain things. Indeed, I remember some everyday items being price-tagged in guineas as a young boy. Do you remember the “10/6” price tag on the hat of the Hatter at the tea party in “Alice’s Adventures in Wonderland”? That tag reads “10 shillings and sixpence”, which is “half a guinea”.

I’m guessing that one of the most famous names in the world of lighthouse construction is George Meade. Before General Meade led the Union soldiers at the Battle of Gettysburg, Lieutenant Meade worked in the US Army Corps of Engineers, and was responsible for the erection of several lighthouses along the east coast.

“Rebbe” is the Yiddish word for “rabbi”.

The Hasidic Jewish movement was founded in the 18th century by Baal Shem Tov, a mystical rabbi from Eastern Europe.

“Quahog” is another name for “hard clam”, the clam that is commonly harvested on the eastern shores of North America. The quahog may also be called the “chowder clam”. Hard clams are the largest of the clams commonly sold, with the cherrystone clams being a little smaller.

Emil Jannings was an actor from Switzerland who also held German and Austrian citizenship. Jannings was the first person to receive an Oscar, as the star of the 1928 silent movie called “The Last Command”. He also starred opposite Marlene Dietrich in the 1930 classic “The Blue Angel”.

The thickness unit known as a “mil” here in the US is usually referred to as a “thou” on the other side of the Atlantic. A “mil” is actually one thousandth of an inch. I vote for “thou” …