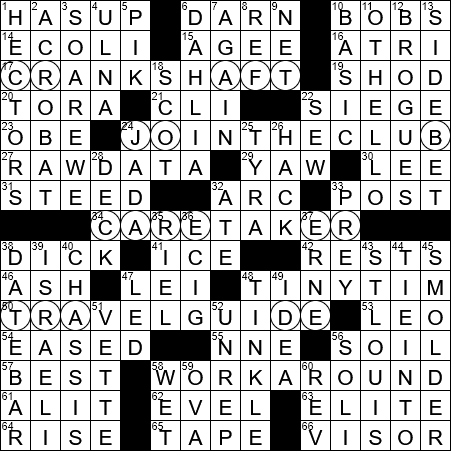 The starting and ending letters in themed answers are types of WORK:

Henry Wadsworth Longfellow was famous for his own work, like “Paul Revere’s Ride” and “The Song of Hiawatha”, but he was also the first American to translate Dante’s epic poem called the “Divine Comedy”.

The famous cave that almost certainly housed Osama Bin Laden for a while was in Tora Bora in eastern Pakistan. Tora Bora is not far (~ 30 mi) from what used to be an even more famous spot, the Khyber Pass. “Tora Bora” is a Pashto name which translates to “black dust”.

The Most Excellent Order of the British Empire is an order of chivalry in the UK that was established in 1917 by King George V. There are five classes within the order, which are in descending seniority:

Alpha-Bits is a Post breakfast cereal that was introduced in 1958, and taken off the shelves in 2006. The cereal was relaunched in 2008 with “0% Sugar!” tagline, but I guess that didn’t sell too well. The original Alpha-Bits formulation was reintroduced in 2008. Sugar, sugar, sugar …

Dick Cavett is best known as a talk show host, one with a wonderful sense of humor. He had a long career on TV, appearing regularly from the 1960s through the 2000s. Cavett is also famous for making up anagrams from the celebrity names. Examples are “genuine class” for Alec Guinness and “grow a spine” (that’s the polite version!) for Spiro Agnew.

The verb “to hector” means “to bully, to dominate in a blustering way”. The term comes from the Trojan hero Hector, who encouraged his fellow Trojans to keep up the fight against the Greeks. I guess he must have bullied them …

Cirque du Soleil is an entertainment company based in Montreal. The company was founded in 1984 by two former street performers, and stages spectacular shows that are a dramatic mix of circus and street entertainment. I’ve seen several Cirque du Soleil shows over the years, and have thoroughly every single one.

The dahlia is a flowering plant native to Mexico and Central America. It was named the national flower of Mexico relatively recently, in 1963. The plant was given the name dahlia in 1791, in honor of Swedish botanist Anders Dahl.

Iago says the following words about jealousy and envy to Othello in William Shakespeare’s play:

It’s possible that the use of the term “brogue”, meaning “Celtic or Irish accent”, is related to the use of “brogue” to mean “stout, heavy show”. According to one source, the footwear was “characteristic of the wilder Irish”. I suppose that the accent of the “wilder Irish” came to be known as a “brogue” as a result.

Jada Pinkett Smith is an actress from Baltimore, Maryland. Pinkett Smith’s most famous role is the human rebel Niobe in “The Matrix” series of movies. Back in 1990, she auditioned for the TV show “The Fresh Prince of Bel-Air”, to play the girlfriend of the character played by Will Smith. She didn’t get the role but did get Will Smith, as the couple were married in 1997.

“Gotham” is a television series that features characters from the DC Comics Batman universe. The series serves as a kind of prequel to the Batman stories. It relates the early career of future Commission Gordon, as well as outlining the origins of villains like the Penguin, the Riddler, Catwoman, Mr. Freeze and the Joker.

Rial is the name of the currency of Cambodia (as well as Yemen, Iran, Oman and Tunisia). Generally, there are 1,000 baisa in a rial.

An electronic cigarette (also called an “e-cigarette”) is a battery-powered device that resembles a real cigarette. The e-cigarette vaporizes a solution that contains nicotine, forming a vapor that resembles smoke. The vapor is inhaled in a process called “vaping”, delivering the nicotine into the body. The assumption is that an e-cigarette is healthier than a regular cigarette as the inhaled vapor is less harmful than inhaled smoke. But, that may not be so …

Before we used the word “chassis” for the base frame of a car, in 1903, the term applied to the carriage base of a large gun, and indeed a window frame (later “sash”), “Châssis” is French for “frame”.

“Tutti” (singular “tutto”) are pieces of music performed by all the artists in a group, as opposed to “soli” (singular “solo”). “Tutto” is the Italian for “all”.