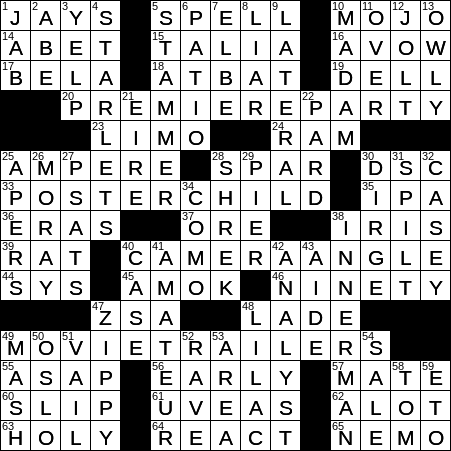 Themed answers each start with a word that often TRAILS (follows) the word “MOVIE”:

The bird known as a “jay” is sometimes called a “magpie”, although the terms are not completely interchangeable.

Bela Lugosi was a Hungarian stage and screen actor, best known for playing the title role in the 1931 film “Dracula” and for playing the same role on Broadway. Lugosi found himself typecast for the rest of his career and almost always played the role of the villain, often in horror movies. When he passed away in 1956, his wife had him buried in the costume he wore playing Count Dracula on Broadway.

35 Brew ordered by its initials : IPA

Zsa Zsa Gabor was a Hungarian-American actress, born in Budapest as Sári Gábor (the older sister of the actress Eva). Zsa Zsa Gabor was married a whopping nine times, including a 5-year stint with Conrad Hilton and another 5 years with the actor George Sanders. One of Gabor’s famous quips was that she was always a good housekeeper, as after every divorce she kept the house!

49 “Coming attractions” offerings, and a hint to the starts of the answers to starred clues : MOVIE TRAILERS

“Lingerie” is a French term. As used in France, it just means any underwear, worn by either males or females. In English we use “lingerie” to describe alluring underclothing worn by women. The term “lingerie” comes into English via the French word “linge” meaning “washables”, and ultimately from the Latin “linum”, meaning “linen”. We tend not to pronounce the word correctly in English, either here in the US or across the other side of the Atlantic. The French pronunciation is more like “lan-zher-ee”, as opposed to “lon-zher-ay” (American) and “lon-zher-ee” (British).