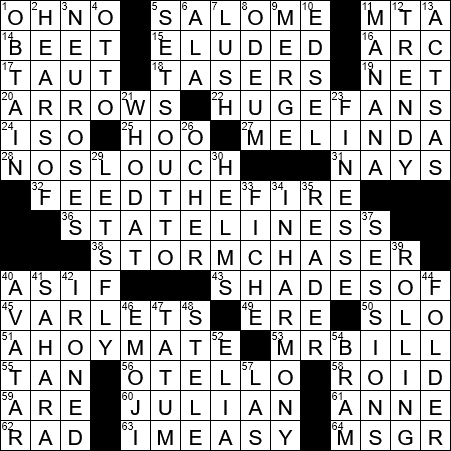 “Salomé” is an 1891 play by Irishman Oscar Wilde that the playwright originally wrote in French. It tells the biblical story of Salome who requested the head of John the Baptist in return for performing the dance of the seven veils. Wilde’s work was adapted by Richard Strauss into an opera of the same name that was premiered in Dresden in 1905.

In the world of music, a slur is curved line that connects neighboring notes that are to be played smoothly, without separation.

In search of (ISO)

38 Many a “Twister” character : STORM CHASER

“Twister” is a 1996 film about a group of storm chasers in Oklahoma. Stars of the movie are Bill Paxton and Helen Hunt. A lot of scenes were shot in a particular farmhouse in Fairfax, Oklahoma. That same farmhouse was destroyed by an actual tornado in 2010.

Slo-pitch (or “slow-pitch”) is a type of softball.

Mr. Bill is a clay figure who appeared in shorts broadcast on “Saturday Night Live”. During each episode, Mr. Bill inevitably falls foul of either a clay character called Sluggo or live character called “Mr. Hands”. Mr. Bill first featured in a Super-8 reel that was shot by filmmaker Walter Williams and submitted to the show. Williams went on to become a full-time writer for the show.

Our contemporary western calendar was introduced in 1582 by Pope Gregory XIII, giving it the name “Gregorian” calendar. The Gregorian calendar superseded the Julian calendar, and both were aligned with movement of the sun across the sky. At issue was that the Julian calendar was misaligned with the solar year by about 11 minutes, creating an error that accumulated over time. Pope Gregory corrected the length of the year by introducing a more accurate rule for calculating leap years. He also wiped out the cumulated “misalignment”, in order to bring together the Christian celebration of Easter and the spring equinox. That correction involved the “loss” of 11 days. The last day of the Julian calendar (Thursday, 4 October 1582) was immediately followed by the first day of the Gregorian calendar (Friday, 15 October 1582).

Monsignor (Msgr.) is a form of address used when speaking to some high ranking members of the Roman Catholic Church. The word “monsignor” comes from the Italian “monsignore” which in turn comes from the French “mon seigneur” meaning “my lord”.

German aviation pioneer Otto Lilienthal was the first to make repeated flights in a true glider, and the first to prolong glider-flight using rising air currents. Sadly, he died in 1896 as the result of a crash in a glider.

WarnerMedia is a media and entertainment conglomerate that was formed in 1990 under the name Times Warner, when Time Inc. merged with Warner Communications.

Time Warner is the third-largest TV and film media company in the world, after Disney and Comcast. Today’s conglomerate came about in 1990 with the merger of Time with Warner Communications. Time is a large magazine publisher, notably of “Time” magazine. Warner Communications was an entertainment company, the parent of Warner Bros. Pictures and Warner Music Group.

10 Ford who championed the Model A : EDSEL

Ocher is a light, yellowy-brown color, although variations of the pigment are possible such as red ocher and purple ocher. “Ocher” is usually spelled “ochre” on the other side of the pond.

An emoji is a character found on many cell phones that is much like an emoticon, but is more elaborate.

Art Tatum was a jazz pianist who overcame the disability of being nearly blind from birth. Many laud Tatum as the greatest jazz pianist of all time.

Stelae (singular “stele” or “stela”) were used all over the world, sometimes as territorial markers and sometimes to commemorate military victories. In later times stelae were commonly erected as commemorative markers in graveyards or other religious sites.

Bram Stoker was an Irish writer best known for the 1897 novel “Dracula”. Stoker’s fame as an author came after his death. During his lifetime he was better known as the personal assistant of renowned English actor Henry Irving. It is believed that Stoker used Irving as his inspiration for the title character in “Dracula”.

57 Syllables in some madrigals : LAS

A madrigal is a piece of vocal music, but notably a piece that is secular in content rather than religious. The madrigal originated in Italy in the early 16th century and it dominated secular music for the next one hundred years until it was gradually displaced by the aria, a product of operatic works.