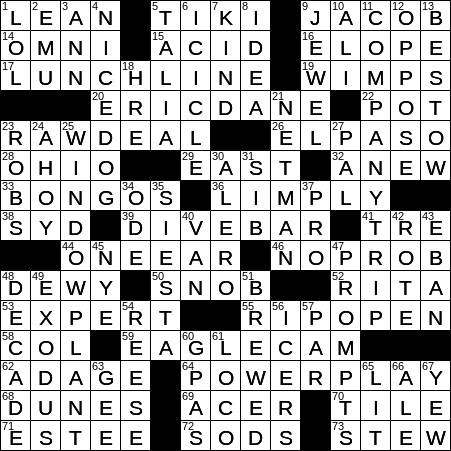 Themed answers comprise two words, and each of those words often follows “POWER”:

The term “Polynesia” was coined in 1756 by author Charles de Brosses when he used it to describe all the islands in the Pacific. This usage was later restricted to what we now refer to as a subregion of Oceania.

Jacob Marley is a character appearing in the wonderful novella “A Christmas Carol” by Charles Dickens. Marley is the deceased business partner of Ebenezer Scrooge who appears to him as a ghost.

Ohio is sometimes referred to as the Buckeye State, taking the name from the state tree. In turn, the buckeye tree gets its name from the appearance of its fruit, a dark nut with a light patch, thought to resemble a “buck’s eye”.

33 Drums held between the knees : BONGOS

Bongo drums are Cuban percussion instruments consisting of a pair of drums, one larger than the other. The smaller drum is called the “hembra” (female) and the larger the “macho” (male).

Australia’s Sydney Airport (SYD) is located just five miles south of the city center, and next to Botany Bay. There have been plans dating back to the 1940s to build a second airport on the outskirts of the city.

We’ve been using the word “dive” in American English for a run-down bar since the latter half of the 19th century. The term comes from the fact that disreputable taverns were usually located in basements, so one had to literally and figuratively dive into them.

A mug shot is a photograph of a person’s face, one often taken for a police record.

The verb “to mug” means to make an exaggerated facial expression. The term comes from mugs used to drink beer (called Toby mugs) that are made in the shape of heads with grotesque expressions. “Mug” can also be a noun meaning “face”.

An aerie is the nest of an eagle, and is also known as an “eyrie”.

Apparently, the expression “better late than never” was first used in print by Geoffrey Chaucer in 1386 in his collection of stories “The Canterbury Tales”. He writes, in “The Yeoman’s Tale”:

For better than never is late; never to succeed would be too long a period.

Ann Radcliffe was an English author famous for her Gothic novels, a genre that she helped to pioneer in the late 18th century. I’m not a huge fan of Gothic novels, Gothic horror in particular …

A think tank is a research institute. The use of the term “think tank” dates back to 1959, and apparently was first used to describe the Center for Behavioral Sciences in Palo Alto, California.

In Disney’s version of the “Aladdin” story, released in 1992, the street urchin Aladdin uses one of three wishes to become a prince, so that he can get near to the Princess Jasmine, with whom he has become besotted. With the genie’s help, Aladdin takes on the persona of “Prince Ali of Ababwa”.

We use the term “sidekick” to mean an associate. Prior to the early 1900s we used the similar terms “side-pal” and “side-partner”.

The vehicle we call a “van” takes its name from “caravan”, and is a shortened version of the older term. Back in the 1600s, a caravan was a covered cart. We still use the word “caravan” in Ireland to describe what we call a “mobile home” or “recreational vehicle” here in the US.

Abba Eban was an Israeli diplomat and politician. He was born Aubrey Solomon Meir Eban in Cape Town, South Africa. While working at the United Nations after WWII, Eban changed his given name to “Abba”, the Hebrew word for “father”. Reportedly, he made this change as Eban saw himself as the father of the nation of Israel.

57 Achievement for a duffer : PAR

A duffer is a golfer, and not a very good one at that.