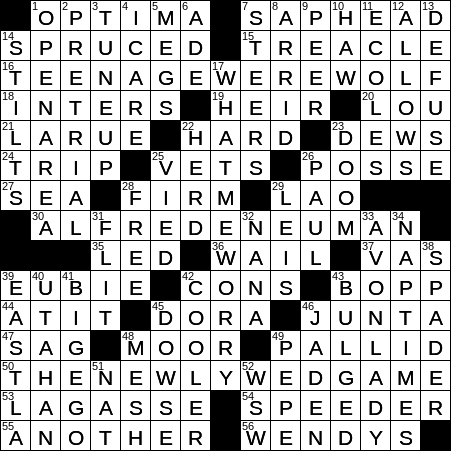 Today’s Theme (according to Bill): A Little “Mad”

We have a mini-theme today, with two long answers at the center of the grid referring to “Mad” magazine:

“Sap” is slang for “fool, someone easily scammed”. The term arose in the early 1800s in Britain when it was used in “saphead” and “sapskull”. All these words are derived from “sapwood”, which is the softwood found in tree trunks between the bark and the heartwood at the center.

“I Was a Teenage Werewolf” is a 1957 horror movie starring Michael Landon in the title role. The film was a breakthrough role for Landon, and two years later he landed the role of Little Joe on TV’s “Bonanza”.

Actor Michael Landon’s big break on TV came with his role as Little Joe Cartwright in the long-running Western show “Bonanza”. He continued his television success with leading roles in “Little House on the Prairie” and “Highway to Heaven”. One of Landon’s other claims to fame is that in 1954, he threw a javelin over 193 feet. That was the longest javelin throw by a high schooler that year.

The New York Yankees baseball team of the late twenties had a particularly successful core group of batters. That line-up was nicknamed “Murderers’ Row”. The most famous “Murderers’ Row” played with the 1927 Yankees, and was made up of:

21 Lash with a bullwhip : LARUE

Alfred LaRue was an actor who appeared in a series of eleven western movies in the forties and fifties, playing the character Marshal Lash LaRue. He was very adept with the bullwhip, and so earned the nickname “Lash”. Years after his onscreen career ended, LaRue was the guy who trained Harrison Ford how to use a bullwhip for his role in the “Indiana Jones” series of films.

At over 2,700 miles in length, the Mekong is the twelfth longest river in the world. It rises in the Tibetan Plateau and empties into the South China Sea at the famed Mekong Delta in Vietnam.

Comet Hale-Bopp was an unusually bright comet that was observable in the night sky for 18 months in the late 1990s. The comet was discovered in 1995 by professional astronomer Alan Hale and amateur observer Thomas Bopp, hence the name. Famously, claims were made that there was an alien spaceship travelling behind Hale-Bopp. 39 members of a San Diego religious cult called Heaven’s Gate committed mass suicide in 1996 in order to reach the spacecraft.

50 Show that has appeared in various versions for six decades : THE NEWLYWED GAME

“The Newlywed Game” first went on the air in 1966 and has been resurrected a few times and is still being shown today. The couples often disagreed on air and started arguments, some of which actually led to divorces.

In CB slang, a “smokey” is a police officer. The term is used because Smokey Bear, the US Forest Service’s mascot, wears a hat that is similar to that worn by many highway patrol officers.

Famously, the Wendy’s chain of fast food restaurants was founded by Dave Thomas, in 1969 in Columbus, Ohio. Dave named his establishment after his fourth child, Melinda Lou “Wendy” Thomas.

Arrid is an antiperspirant deodorant brand introduced in the thirties. Slogans associated with Arrid have been “Don’t be half-safe – use Arrid to be sure”, “Stress stinks! Arrid works!” and “Get a little closer”.

11 They give lessons in French : ECOLES

Doctor Doom is a supervillain in the Marvel Comics universe, and is an archenemy of the Fantastic Four.

Singer-songwriter Paul Simon’s career took off when he was partnered with Art Garfunkel. Simon was the really the writing powerhouse of Simon & Garfunkel, and wrote most of their big hits, including “The Sound of Silence”, “Mrs. Robinson”, and “Bridge over Troubled Water”. Simon has had three wives, including actress Carrie Fisher (1983-1984), and singer Edie Brickell whom he wed in 1992.

The adjective “peripatetic” means travelling on foot, or walking from place to place. The term comes from a Latin word that was applied to the disciples of Aristotle. Aristotle had the habit of teaching while strolling through the public meeting place in Athens. The Latin word comes from the Greek “peripatetikos” meaning “given to walking about”.

Actor James Spader’s breakthrough role was the male lead in the 1989 film “Sex, Lies and Videotape”. After building a successful career on the big screen, Spader played some high-profile characters on the small screen in shows like “The Practice”, “Boston Legal” and “The Blacklist”. Spader worked as a yoga instructor while he was starting out his career, and indeed met his ex-wife while working at a yoga studio in the eighties.

East Los Angeles (usually “East LA”) is the most populous census-designated place in California, and is home to over 125,000 people.

Dowsing is the practice of divining, not just for water but also for buried metals and gemstones. Often a dowser will use a Y-shaped or L-shaped rod as a tool, which can also be called a dowser. Here in the US, the tool used might be referred to as a “witching rod”, as it is usually made from witch-hazel.

In the world of carpentry, a dovetail joint is one using a “pin” cut into the end of one piece of wood mating with a “tail” cut into another. That shape of that “tail” is said to resemble the tail of a dove, hence the name. We use the verb “to dovetail” in a figurative sense, meaning to “to unite closely”.