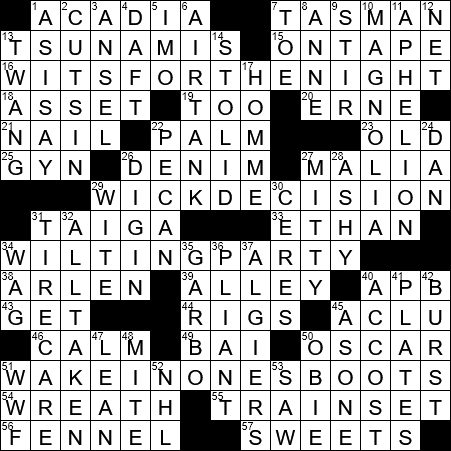 Today’s Theme (according to Bill): Don’t Wit this Wiz

Themed answers are common phrases starting with a QU- that’s been changed to a W-:

Tasmania is the large island lying off the southeast coast of Australia. In 1642, the Dutch explorer Abel Tasman became the first European to sail past the island. Tasman named his discovery Van Diemen’s Land after the Governor of the Dutch East Indies, Anthony van Diemen. The name was officially changed to Tasmania, after the discoverer himself, in 1856. In Australia, a more familiar name used is “Tassie”.

13 Pressure sensors attached to buoys are parts of their warning systems : TSUNAMIS

A deep-ocean tsunami detection buoy is an important instrument used to detect and confirm the presence of tsunami waves following an underwater seismic event. Each tsunami buoy comprises a pressure sensor that is anchored to the seabed, and a buoy floating on the surface. The buoy monitors the height of the column of water above the sensor, and so can detect the dramatic change in height that occurs when a tsunami wave passes. A network of detection buoys relay the height measurements via satellite to a tsunami warning center.

Malia Obama is the oldest of Barack and Michelle Obama’s two daughters. Malia graduated from the private Sidwell Friends School in Washington, D.C., the same school that Chelsea Clinton attended. Malia took a gap year after leaving high school, and spent the 2016 summer as an intern in the US Embassy in Madrid, before heading off to Harvard in 2017.

The word “taiga” is used for an ecosystem largely covered in coniferous forests that exists in northern regions around the world. “Taiga” is Mongolian in origin, and is sometimes used interchangeably with “boreal forest”.

“Boyhood” sounds like an interesting 2014 film. It’s about the coming-of-age of a young boy and his older sister. The film was actually shot over an 11-year period, so that the actors were seen to be growing up at the same time as the characters that they were playing. The critics loved this movie.

38 “Over the Rainbow” composer : ARLEN

Bai Brands is a beverage company that specializes in the low-cal soft drinks that include antioxidants.

Anne, Princess Royal was born in 1950 and is the only daughter of British Queen Elizabeth II. Princess Anne has been in the public spotlight for many things, including her success as an equestrian. Princess Anne was the first member of the British Royal Family to have competed in an Olympic Games. Her daughter Zara Phillips continued the tradition and competed as a member of the British equestrian team in the 2012 Olympic Games. Zara’s medal was presented to her by her own mother, Princess Anne.

Prince Harry, Duke of Sussex is the younger of the two sons of Charles and Diana, Prince and Princess of Wales. Famously, Prince Harry married American actress Meghan Markle in 2018. The groom’s name was Prince Henry of Wales until the marriage, at which time his name officially changed to “Prince Harry”.

The magnolia is the state flower of both Louisiana and Mississippi.

The monarch butterfly has very recognizable orange and black wings, and is often seen across North America. The monarch is the state insect of several US states and was even nominated as the national insect in 1990, but that legislation was not enacted.

“The Secret Life of Walter Mitty” is a short story by James Thurber that was first published in 1939 in “The New Yorker”. The story was made into a film in 1947 with Danny Kaye in the title role. The Danny Kaye film was remade in 2013 with Ben Stiller playing Mitty. Mitty is a mild-mannered man with a very active fantasy life.

Wite-Out is a brand of correction fluid made by Bic.

32 Like the seats in an SRO performance : ALL TAKEN

A card, wag or riot is a very amusing person.