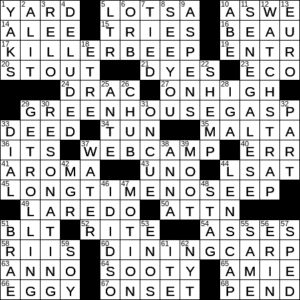 Themed answers are common phrases, but with a letter P added to the END:

Killer bees are descended from European and African bees that were deliberately interbred by a Brazilian geneticist in 1957. The resulting hybrid was intended to be isolated from local populations, but 28 swarms were accidentally released into the wild. Over the coming decades, the Africanized bees have been remarkably successful in ecological terms and have spread right through South and Central America. The first to be found in the US were discovered in California in 1985.

The term “entr’acte” comes to us from French, and is the interval “entre deux actes” (between two acts) of a theatrical performance. The term often describes some entertainment provided during that interval.

Greenhouse gases are those that absorb and emit infrared radiation, meaning that they act as an insulator for our planet. The most abundant greenhouse gases in the atmosphere are water vapor, carbon dioxide and methane. Levels of carbon dioxide in the atmosphere have increased by about 40% since 1750, and levels of methane have increased over 150% in the same time frame.

43 Game with a “Moo!” version for preschoolers : UNO

Laredo is a border city in Texas that is situated on the banks of the Rio Grande, across the border from Nuevo Laredo in Mexico.

58 “How the Other Half Lives” author Jacob : RIIS

Journalist Jacob Riis is famous for his photographs and newspaper articles that highlighted the plight of the impoverished in New York City. He wrote “How the Other Half Lives”, originally an extensive article that appeared in “Scribner’s Magazine” at Christmas 1889. The article had such an impact that Riis was commissioned to expand it into a book, which was published the following year.

Our word “custard” evolved from the Middle French “croustade” meaning “meat or fruit pie with a crust”. Over time, the letter R fell away from “croustade” leading to “custard”, possibly due to the influence of the other food item “mustard”.

4 Played for a chump : DELUDED

We’ve been using the word “chump” to mean “blockhead” dates back to the 1880s. Prior to that, a chump was a short and thick lump of wood.

Shinzo Abe first became Prime Minister of Japan in 2006, at which time he was the youngest person to hold the post since WWII and was the first PM born after the war. Abe was in office for less than a year, but was voted in again in 2012. At the end of 2019, Abe became the longest-serving Prime Minister in the history of Japan.

There is a whole family of fish called “chubs” including European chubs, lake chubs, hornyhead chub, creek chubs, and a host of others.

Domestic water buffalo are found all over the world, but mainly in the Indian subcontinent, Southeast Asia and China. More people depend on water buffaloes than any other domestic animal. They have many uses to man, from pulling plows to providing milk.

53 Short-lived spinoff of “The Dukes of Hazzard” : ENOS

Enos Strate (played by Sonny Shroyer) was the small-town deputy in the television sitcom “The Dukes of Hazzard”, and the success of his character merited a follow-on show. The spin-off “Enos” only ran for 18 episodes.

“The Dukes of Hazzard” is a comedy adventure TV show that originally aired from 1979 to 1985. The title characters are Bo and Luke Duke, two cousins from the rural part of the fictional county of Hazzard in Georgia. The pair drive around in the General Lee, a flashy Dodge Charger stock car. Other notable characters in the show were Daisy Duke (played by Catherine Bach) and Boss Hogg (played by Sorrell Booke).

Erin Andrews is a sports reporter. I don’t watch much in the line of sports but I do know Ms. Andrews for her appearances on “Dancing with the Stars” in 2010. She did quite well and made it to the final of the show. Then she became the show’s co-host alongside Tom Bergeron.

62 Paper read on the LIRR or Metro-North, perhaps : NYT

The MTA’s Metro-North Commuter Railroad runs service between New York and the city’s northern suburbs. Metro-North’s current form dates back 1983, although the service has its roots in railroad lines that have been in operation since 1832.