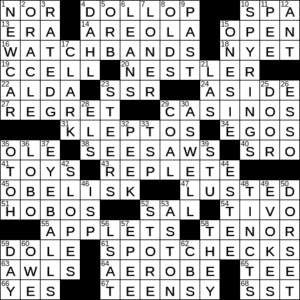 31 Ones who take things badly? : KLEPTOS

45 Washington Monument, for one : OBELISK

An obelisk is a rectangular column that tapers to the top and is capped by a pyramid shape.

No one seems to know for sure how the term “hobo” originated, although there are lots of colorful theories. My favorite is that “hobo” comes from the first letters in the words “ho-meward bo-und”, but it doesn’t seem very plausible. A kind blog reader tells me that according to Click and Clack from PBS’s “Car Talk” (a great source!), “hobo” comes from “hoe boy”. Hoe boys were young men with hoes looking for work after the Civil War. Hobos differed from “tramps” and “bums” in that “bums” refused to work, “tramps” worked when they had to, while “hobos” traveled in search of work.

A vagabond is a person without a home who moves from place to place. The term derives from the Latin “vagabundus” meaning “wandering, strolling about”.

Abe Vigoda played Detective Sergeant Phil Fish in television’s “Barney Miller” in the seventies, and even got his own spin-off show called “Fish”. On the big screen, Vigoda played Sal Tessio in “The Godfather” and Grandpa Ubriacco in “Look Who’s Talking”.

“Applet” is the name given to a small application that runs within a larger computer program.

The tenor horn is one of a series of brass instruments developed in the 1840s by Belgian inventor and musician Adolphe Sax. It has largely been displaced by the French horn in a modern symphony orchestra, but there are plenty of tenor horns being played today in British brass bands.

Despite all Bob Dole’s success in the world of politics, he is remembered by many as the VP candidate who lost to Walter Mondale (and Jimmy Carter) and the presidential candidate who lost to incumbent Bill Clinton. The man is a true war hero. He joined up in 1942 and fought with the Army’s 10th Mountain Division in Italy. In 1945 he was hit by machine gun fire in his right arm and back Dole was so badly injured that his comrades could only dose him up with morphine, write “M” on his forehead with his own blood (so that another, fatal dose of morphine would not be administered) and continue fighting the battle. Dole had to wait nine hours to be evacuated from the battlefield, and wait another three years before being discharged from hospital back in the States.

An aerobe is an organism that lives in an environment rich in oxygen. An anaerobe, on the other hand, does not require oxygen for survival.

Most of what we call that “new car smell” comes from adhesives and sealers that are holding together various plastic components in the automobile’s interior. In fact, there is concern in some quarters that the compounds giving that new car smell might pose a health risk.

In ancient Greece and Rome, an oracle was someone believed inspired by the gods to give wise counsel. The word “oracle” derives from the Latin “orare” meaning “to speak”, which is the same root for our word “orator”. One of the most important oracles of ancient Greece was Pythia, the high priestess to Apollo at Delphi.

All of the planets in the Solar System, except for Earth, were named for Greek and Roman gods and goddesses:

Oldsmobile introduced the Cutlass in 1961, and used the name on a succession of models right up to 1999.

The word “Portugal” starts with a capital letter P (pee).

A onesie is a baby’s one-piece bodysuit, and is a common gift at a baby shower.

21 Syllables in some madrigals : LAS

A madrigal is a piece of vocal music, but notably a piece that is secular in content rather than religious. The madrigal originated in Italy in the early 16th century and it dominated secular music for the next one hundred years until it was gradually displaced by the aria, a product of operatic works.

The timber wolf is also known as the gray wolf, tundra wolf or lobo.

To tinct is to add a little color to something. The term “tinct” ultimately derives from the Latin verb “tingere” meaning “to dye”.

Dorset Horn (or simply “Dorset”) sheep are named for the county of Dorset in south-west England where the breed originated.

Dorset is a county on the coast in South West England, with the county town of Dorchester. If you’ve read Thomas Hardy (he was born near Dorchester), you might be familiar with Dorset as he set many of his novels in the county.

Aston Martin is a British car manufacturer founded in 1913 by Lionel Martin. The Aston part of the company name comes from Aston Hill, a famous site for hill-climbing cars that is nearby the original factory. Aston Martin cars are much loved by the British entertainment industry. James Bond was given one in “Goldfinger”, and Michael Caine drove one in the 1969 version of “The Italian Job”. Also, Roger Moore’s character drove a yellow Aston Martin in the seventies television show “The Persuaders!”.

The reality show “Survivor” is based on a Swedish television series created in 1997 called “Expedition Robinson”.