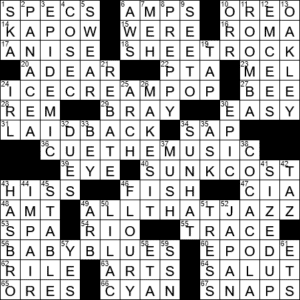 Themed answers each end with a type of MUSIC:

In Italian, “il Colosseo” (the Colosseum) is found in “Roma” (Rome).

The Colosseum of Rome was the largest amphitheater in the whole of the Roman Empire in its day, and could seat about 50,000 people. The structure was originally called the “Amphitheatrum Flavium” but the name changed to “Colosseum” after a colossal statue of Emperor Nero was located nearby.

Eagles have extraordinary eyesight that is several times stronger than that enjoyed by humans. The average eagle weighs about ten pounds, and yet has eyes that are about the same size as human eyes.

In French, “salut” means “hi”, and is less formal than “bonjour”. The former term can also be used as a friendly toast.

A preppy is a student or graduate of a preparatory school. Such a school is designed to prepare students for college, and is often private with expensive fees.

“Catch-22” is a novel by Joseph Heller set during WWII. The title refers to absurd bureaucratic constraints that soldiers had to suffer. Heller’s “Catch 22” was invoked by an army psychiatrist to explain that any pilot requesting to be evaluated for insanity, to avoid flying dangerous missions, had to be sane as only a sane man would try to get out of such missions. The term “catch-22” has entered the language and describes a paradoxical situation from which one can’t escape due to contradictory rules; one loses, no matter what choice one makes.

Many regard Annie Oakley as the first American female superstar, given her celebrity as a sharpshooter in Buffalo Bill’s Wild West Show. She toured with the show all over Europe, and performed her act for the likes of Queen Victoria of England and Kaiser Wilhelm II of Germany. Supposedly, using a .22 caliber rifle from 90 feet away, Oakley could split a playing card edge-on, and shoot five or six holes in the card before it hit the ground!

Buffalo Bill Cody became a great showman after he retired from the US Army. While serving in the Army, Buffalo Bill was awarded the Medal of Honor. William Frederick Cody earned his “Buffalo Bill” nickname while supplying buffalo meat to the Kansas Pacific Railroad. Cody “hunted” and slaughtered over 4,000 American bison in an 18-month period to fulfill his contract with the railroad.

We most associate use “rebate” as a noun, describing a return part of a payment. The term “rebate” came into English from the French verb “rebattre” meaning “to beat down, drive back”. Makes sense to me …

25 Structure with a keystone : ARCH

The keystone of an arch is the last piece put in position, the placement of which allows the arch to bear weight. The keystone sits right at the apex.

Beyoncé Knowles established herself in the entertainment industry as the lead singer with the R&B group Destiny’s Child. She launched her solo singing career in 2003, two years after making her first appearance as an actor. In 2006 she played the lead in the very successful movie adaptation of the Broadway musical “Dreamgirls”. Beyoncé is married to rap star Jay-Z. She is also referred to affectionately as “Queen Bey”, a play on the phrase “the queen bee”. Her fan base goes by the name “Beyhive”.

The Hasbro toy company was founded in 1923, to sell textile remnants. The founders were Herman, Hillel and Henry Hassenfeld, three brothers and hence the name “Hasbro”. The company diversified into toys in the early forties, with the first real market success being Mr. Potato Head.

The island nation of Japan comprises 6,852 islands in total. The five main islands are Hokkaido, Honshu, Shikoku, Kyushu, and Okinawa.