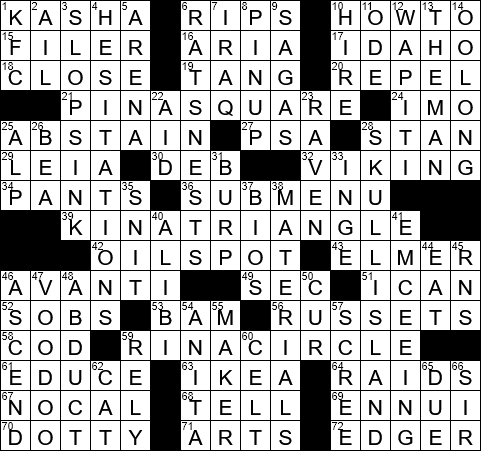 Today’s Theme (according to Bill): Letters in Shapes

Themed answers are images comprising a letter in a shape:

Tang is a fruity drink that is sold in powdered form. The sales of Tang “took off” when John Glenn took Tang on his Mercury flight. However, it is a common misconception that Tang was invented for the space program. That’s not true, although it was included in the payload of many missions.

Stan Musial was a baseball player who went by the nickname “Stan the Man”, a moniker he was awarded by the Brooklyn Dodgers fans in 1946. Off the field, Stan was quite the harmonica player.

29 Princess from a galaxy far, far away : LEIA

Every “Star Wars” film starts out with an opening crawl announcing “A long time ago, in a galaxy far, far away….”

The Minnesota Vikings joined the NFL as an expansion team in 1960. Founded in Minnesota, the team’s name reflects the location’s reputation as a center of Scandinavian-American culture.

According to Jewish dietary laws, kosher food is fit to eat, and food that is not fit to eat is referred to as treif (or “tref”). The usage of “kosher” has extended to include anything considered legitimate.

Elmer Fudd is one of the most famous Looney Tunes cartoon characters, and is the hapless nemesis of Bugs Bunny. If you have never seen it, check out Elmer and Bugs in the marvelous “Rabbit of Seville”, a short cartoon that parodies Rossini’s “Barber of Seville”. Wonderful stuff …

Federico Fellini was a film director and scriptwriter from Rimini in Italy. Fellini won more Academy Awards for Best Foreign Language Film than anyone else.

Cape Cod is indeed named after the fish. It was first called Cape Cod by English navigator Bartholomew Gosnold in 1602 as his men caught so many fish there.

In the magazine world, a centerfold is a large illustration that is folded to form the central spread of a publication. Famously, Hugh Hefner used the centerfold of “Playboy” magazine for a large color photograph of a nude model, and since then the term “centerfold” has been used for a model who has featured in such a layout. Playboy’s first centerfold model was Marilyn Monroe.

23 Poetic bird of one word : RAVEN

“The Golden Girls” is a sitcom that originally aired in the eighties and nineties. The show features Bea Arthur, Betty White, Rue McClanahan and Estelle Getty as four older women who share a house in Miami.

“His Dark Materials” is a fantasy television series based on the epic trilogy of novels of the same name by Philip Pullman. Not for me …

Voodoo is a religion that originated in the French slave colony of Saint-Domingue on the Caribbean island of Hispaniola.

Anita Baker is an R&B and soul singer who was raised in Detroit, Michigan. Baker’s most successful song is the Grammy-winning “Sweet Love” that was released in 1986.

A Breton is a native of Brittany. Brittany is a large peninsula in the northwest of France that is known in French as “Bretagne”.

There are some cleverly named supporting characters that appear in some “Bugs Bunny” cartoons related to knights. One is Sir Loin of Beef, and the other Sir Osis of the Liver.