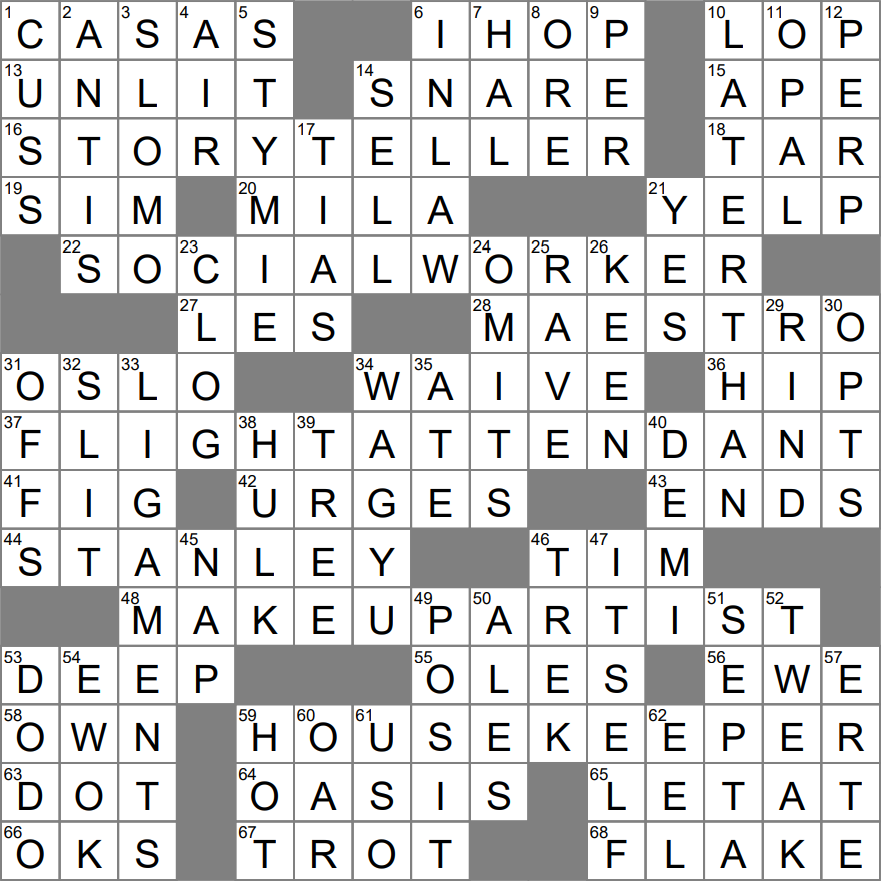 Today’s Theme (according to Bill): The Wrong Job, One Might Say

Themed answers are professions clued with descriptions of a different job:

6 “Let’s put a smile on your plate” breakfast chain : IHOP

Our term “candle” ultimately comes from the Latin verb “candere” meaning “to shine”.

The 2010 movie “Black Swan” is a psychological thriller (described by some as a horror film) set against the background of a ballet company staging Tchaikovsky’s “Swan Lake”. Natalie Portman plays an obsessive ballerina who seems perfect for the role of the White Swan in “Swan Lake”, but doesn’t seem to have the passion to also play the Black Swan. Then things start to go wonky …

The Mission (also Black Mission) fig is so called because it was introduced to North America by Franciscan missionaries. They planted the first Mission figs in this country in San Diego, in 1768. The number of plantings grew as the order opened more and more missions up and down the California coast.

44 “The Office” sales rep who solves crosswords during meetings : STANLEY

In the US version of the sitcom “The Office”, the character Stanley Hudson is a disgruntled and grump sales rep. Stanley’s saving grace (to us cruciverbalists) is that he is always solving crosswords instead of doing his work. He is portrayed by actor Leslie David Baker. Early in his career, Baker played an office worker in OfficeMax commercials.

Actor and comedian Tim Meadows appeared for tenseasons as a cast member on “Saturday Night Live” (SNL). He also played a character named John Glascott on the sitcom “Schooled”, and the same character on “The Goldbergs”.

59 Audiophile with an extensive collection of club mixes, one might say : HOUSE KEEPER

House music is a type of electronic dance music. The genre originated in Chicago in the eighties, and has now invaded the whole world. House music is characterized by a rhythmic thumping sound from drum machines and a simple 4/4 beat. It’s not the Beatles …

The concept of playing an imaginary electric guitar ( an “air guitar”) is so popular that there are several championship competitions held. There has even been a world championship since 1996. Crazy …

Back in the early 1400s, the verb “to stump” meant “to stumble over a tree stump”. In the early 1800s, the meaning extended to mean “to baffle, bring to a halt by introducing obstacles”.

11 Birthstone for some Libras : OPAL

“Wagyu” is a name given to four different breeds of beef cattle in Japan. The famous Kobe beef is obtained from wagyu cattle. The name comes from the Japanese “Wa gyu”, which simply translates as “Japanese cattle”.

Canadian actress Tatiana Maslany had her work cut out in the show “Orphan Black”. That’s because she had to play several different characters, all clones born by in vitro fertilization. She also plays the title character Jennifer Walter in the Superhero TV show “She-Hulk: Attorney at Law”.

Ancestry.com is the largest commercial genealogy company in the world. It operates out of Provo, Utah.

Porter is a dark beer that originated in London in the 1700s. It is named for the street and river porters with whom it was very popular. Porter is a well-hopped beer made using brown malt, which gives it the dark color.

To tinker with something is to adjust or experiment with it. Back in the late 1500’s, “to tinker” was “to work as a tinker”. In those days, a tinker was someone who mended pots and pans.

54 “Star Wars” critter that looks like a teddy bear : EWOK

Electric eels are so called because they are capable of delivering an eclectic shock that debilitates their prey. They are also able to electrolocate their prey. They do so by generating a weak electric field. The prey causes a distortion in this electric field, which is picked up by the eel’s electroreceptor organs.