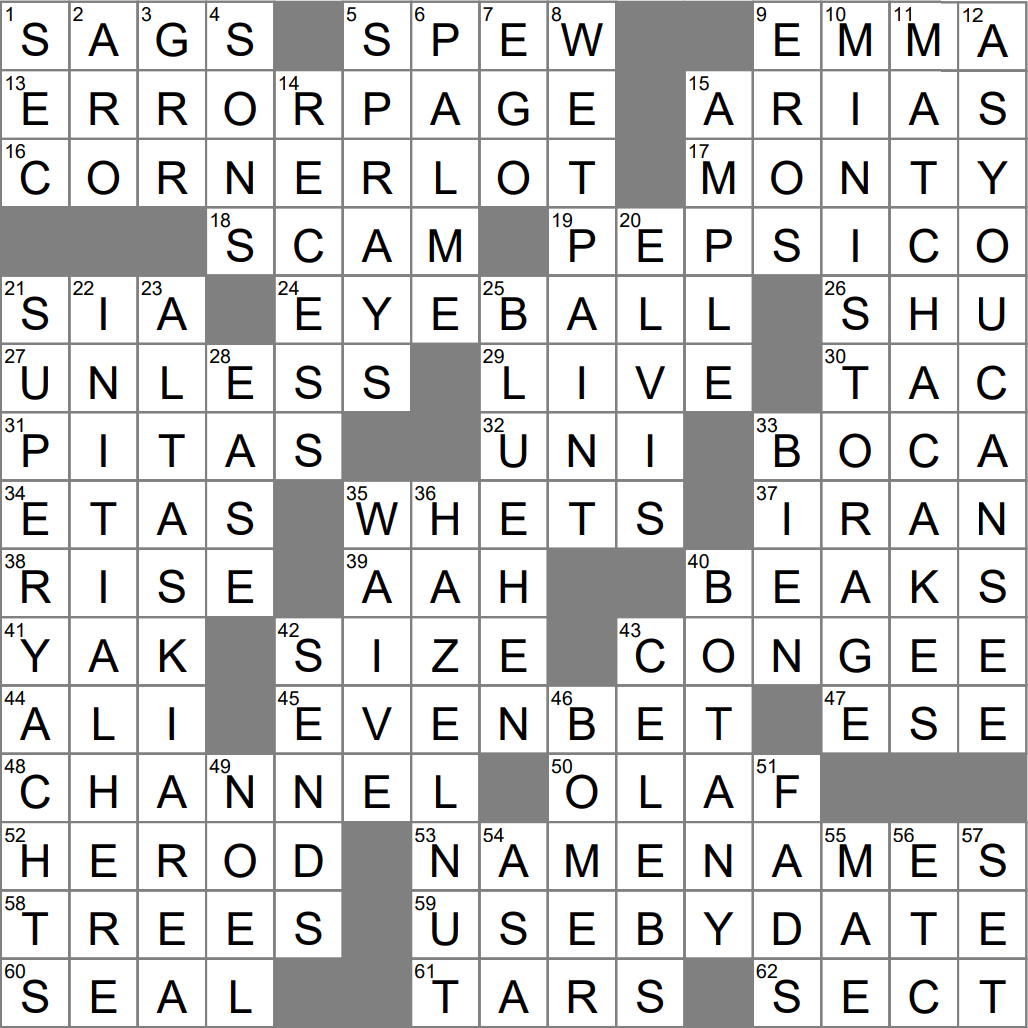 9 Literary heroine who had “very little to distress or vex her” : EMMA

An HTTP 404 error is one of the common errors encountered when browsing the World Wide Web. The error is returned when a user accesses a site successfully, but cannot find the page that is requested. Usually, this 404 Not Found error is encountered when clicking on a broken or dead link. As an aside, I’d appreciate it if any reader could contact me or leave a comment if a broken link is encountered on this web site. Thank you!

“Sacred Arias” is a 1999 studio album recorded by Italian tenor Andrea Bocelli. The album sold well … it is the biggest selling classical album ever, by a solo artist.

Andrea Bocelli is a classically-trained tenor from Italy who sings popular music, and hence is a so-called cross-over artist. Bocelli was born with poor eyesight and then became totally blind at the age of 12 when he had an accident playing soccer.

Monty Hall is the stage name of Canadian-born television personality Monte Halperin. Hall is perhaps best known as the longtime host of the game show “Let’s Make a Deal”.

The Quaker Oats Company was founded in 1901 when four oat mills merged, including the Quaker Mill Company of Ravenna, Ohio. Quaker Mill’s owner Henry Parsons Crowell played the key role in creating the new company and remained at the helm until 1943.

“Sia” is the stage name of Australian singer Sia Furler from Adelaide. She is a cousin of Australian Christian Rock musician Peter Furler. Sia is a very private person, and even covers her face with a blond wig while performing.

“Guilty Crown” is an anime TV series from Japan. It is about a schoolboy who develops a superpower, a superpower that I don’t really understand (after reading a little about it) …

In 2007, a student rode a unicycle for 24 hours around the athletic track at Aberystwyth University. In so doing, the young man broke the record for the longest ride on a unicycle without feet touching the ground, a distance of 105.57 miles. He also covered a total distance of 282 miles over the full 24-hour period.

The Boca Burger first hit grocery store shelves in 1979 (marketed as the “Sun Burger”), making it one of the first veggie burgers to be mass produced. They are soy-based meat alternatives.

The words “whet” and “pique” can both be used in the sense of sharpening, or awakening one’s interest or desire.

The Azadi Tower is a magnificent gateway that marks the entrance to the city of Tehran. The tower was completed in 1971 to commemorate the 2,500th anniversary of the Persian Empire and was named the Shahyad Tower, or “King’s Memorial”. This was changed to Azadi Tower after the Iranian Revolution of 1979. “Azadi” translates into English as “freedom”.

The English word “yak” is an Anglicized version of the Tibetan name for the male of the species. Yak milk is much prized in Tibetan culture. It is made into cheese and butter, and the butter is used to make a tea that is consumed in great volume by Tibetans. The butter is also used as a fuel in lamps, and during festivals the butter is even sculpted into religious icons.

Congee is an Asian dish. It is a gruel prepared by cooking rice in water for an extended period, long enough for the grains to practically disintegrate.

In the 2013 animated film “Frozen”, Olaf is a happy-go-lucky snowman who provides a lot of comic relief in the movie. He is voiced by actor and comedian Josh Gad.

Herod Antipas was a ruler of Galilee and Perea in the 1st century CE. Even though he never held the title of “king”, he is referred to in the New Testament of the Christian Bible as “King Herod”. So, it was Herod Anitipas who was so instrumental in the executions of John the Baptist and Jesus of Nazareth.

“Jesus Christ Superstar” is a rock opera that was first released in album form in 1970, before being adapted for the stage in 1971. The music was composed by Andrew Lloyd Weber and the lyrics by Tim Rice.

The Southeastern Conference (SEC) is an athletic conference composed mainly of schools in the southeastern US. The SEC was founded back in 1932 with a roster of thirteen schools, ten of which are still members of the conference.

2 Not prone to crushes, for short : ARO

Someone described as aromantic (“aro”, for short) experiences little or no romantic attraction. The opposite of aromanticism is a alloromanticism.

Ivy Compton-Burnett was an English author who wrote novels mainly dealing with domestic situations in large households. The titles of many of her novels do fit a pattern:

Matcha is a powder made by grinding dried, green tea leaves. The selected tea bushes are heavily shaded for several weeks prior to harvest, which stimulates the production of chlorophyll resulting in darker green leaves. Matcha is used in East Asian cuisines to prepare tea for drinking, and also as an ingredient in dishes such as ice cream, cakes and sushi rolls.

Elvis Presley was born in Tupelo, Mississippi and moved to Memphis, Tennessee with his family when he was 13-years-old. Once he had achieved fame, Elvis purchased Graceland, the famous Memphis home that he used for himself and his family. I visited Graceland many years ago, and thoroughly enjoyed the experience.

Tupelo is a city in Mississippi. It has a few claims to fame, one being that it was the birthplace of Elvis Presley. It was also the first city to benefit from electric power produced by the Tennessee Valley Authority (TVA), earning it the nickname “The First TVA City”.

“Below Deck” is a reality TV show that features crew members living and working on a superyacht during the charter season. It’s a popular show, one that spawned several spinoffs, for example:

Alta ski resort actually lies within the Salt Lake City Metropolitan Area. The first ski lift in the resort was opened way back in 1939. Today, Alta is one of only three ski resorts in the country that prohibits snowboarding (along with Deer Valley, Utah and Mad River Glen, Vermont). The ski resort of Snowbird, located next to Alta, has been in operation since 1971.

The Delaware Blue Hen has been the state bird of Delaware since 1939. As a result, the athletic teams of the University of Delaware are known as the Delaware Fightin’ Blue Hens.

Hazelnuts are the (delicious) fruit of the hazel tree. About a quarter of the world’s supply of hazelnuts is gobbled up by Italian confectioner Ferrero, using it to make Nutella spread (also delicious) and Ferraro Rocher confectioneries (even more delicious).

“Glitterati” is a melding of the words “glitter” and “literati”.

Actor Matt Bomer’s first TV acting roles were on the soaps “All My Children” and “Guiding Light”. His breakthrough role was playing con artist Neal Caffrey in the cop show “White Collar”.

“Doom Patrol” is a superhero TV series based on the superhero team of the same name in the DC Comics universe.

“GLOW” is a comedy-drama TV show about the women’s professional wrestling promotion known as Gorgeous Ladies of Wrestling (GLOW).

Asa Butterfield is an actor from London whose breakthrough came with the title role in the 2008 Holocaust movie “The Boy in the Striped Pyjamas”. More recently, he starred in the excellent Netflix comedy-drama series “Sex Education”, alongside Gillian Anderson.

55 Astronaut Jemison who was the first Black woman in space : MAE