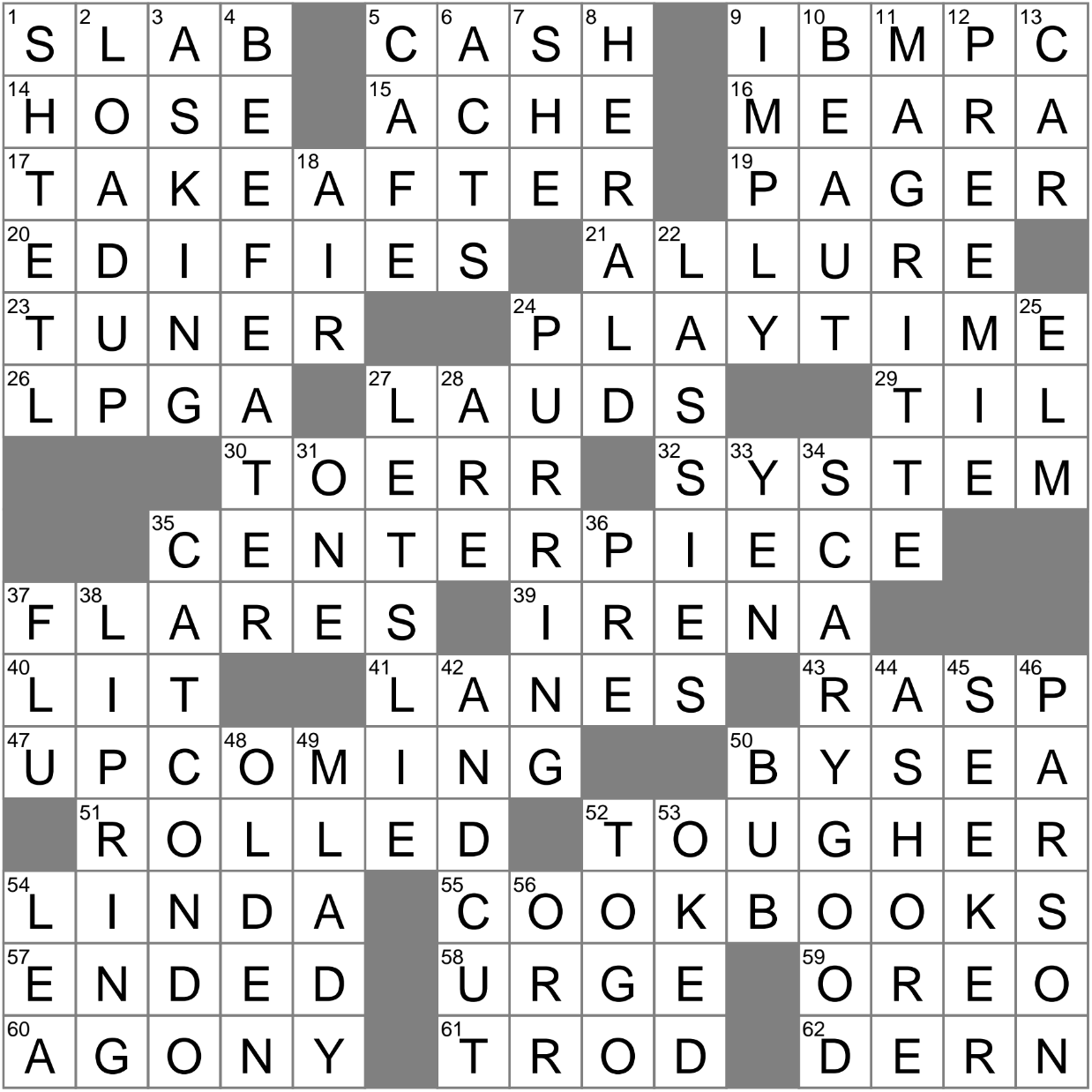 Today’s Theme (according to Bill): Centerpiece

Themed answers are each common phrases with a word missing (the CENTER PIECE). That word is cited in the clue:

5 Singer depicted in the biopic “Walk the Line” : CASH

I must admit that I am not a big country music fan, but who doesn’t love Johnny Cash? The man had such a unique voice, and indeed unique songs. I think that his biopic, “Walk the Line”, is very cool, as is the title song itself. Recorded back in 1956, “Walk the Line” is relatively creative for “popular” music. The basic rhythm of the song emulates the sound of a freight train, the “boom-chicka-boom” sound. Cash’s guitar has a unique tone to it as it plays this rhythm, achieved by threading a piece of paper between the guitar strings giving the rhythm a bit of a “buzz”. Above the rhythm line, each of the five verses is sung in different keys. You can actually hear Cash hum a note signifying the key change at the start of each verse. With all these modulations, the final verse is sung a full octave lower than the first. A remarkable tune …

In the early days of desktop computing, an IBM clone (also “PC clone”) was a computer built by an IBM competitor that was designed to function just like an IBM, but without using any copyrighted material or trade secrets that were the intellectual property of IBM. Clones were always a competitive issue for IBM, and perhaps were part of the reason that IBM doesn’t make desktop computers today …

The ache for home lives in all of us. The safe place where we can go as we are and not be questioned.

To edify is to provide instruction in order to improve spiritually, morally or intellectually. The intent is to “build up” someone’s faith or morality, and so “edify” comes from the Latin “aedificare” meaning “to build, construct”. This Latin root also gives us our word “edifice”, meaning “massive building”.

To allure is to tempt by offering something very desirable. The verb “to allure” came into English from the Old French word “aleurer” meaning “to attract, train (a falcon) to hunt”. The ultimate root is the noun “loirre” meaning “lure for a falcon”.

23 One ensuring accuracy on a grand scale? : TUNER

The Vare Trophy is awarded by the LPGA to the player with the lowest scoring average in a season. The trophy is named for Glenna Collett-Vare who is said to have been the greatest female golfer of the 1920s.

All of the planets in the Solar System, except for Earth, were named for Greek and Roman gods and goddesses:

Irena Sendler was a Polish nurse who worked with the Polish Underground during WWII. She played a leading role in smuggling about 2,500 children out of the Warsaw Ghetto, saving them from the Holocaust. Sendler was discovered by the Nazis, tortured and sentenced to death. However, Sendler managed to escape, and survived the war.

Linda Eastman is best-known for her marriage to Paul McCartney. Having said that, I was more aware of Linda’s work as a photographer prior to her relationship with the ex-Beatle. She really knew how to take black & white images. In 1968, Eastman’s portrait of Eric Clapton was the first photo by a woman to be used on the front cover of “Rolling Stone” magazine.

The Yiddish word for “town” is “shtot”, and so “shtetl” is the diminutive form meaning “small town”.

Isaac Bashevis Singer was a Polish-born American author who won the Nobel Prize for literature in 1978. One of Singer’s most celebrated works is a short story titled “Yentl the Yeshiva Boy”. Along with Leah Napolin, he adapted the story into a 1975 stage play “Yentl”. Famously, Barbra Streisand co-wrote a screenplay based on the stage play that was released as a musical movie with the same title in 1983.

She & Him is a musical duo comprising guitarist M. Ward and vocalist Zooey Deschanel, the noted actress. Ward and Deschanel met on the film set for “The Go-Getter” in 2007, and got together to sing over the film’s end credits.

A “corker” is something astonishing, and also something that settles a debate or discussion. The term probably comes from putting a cork in a bottle, an act of finality.

11 “The Treachery of Images” painter : MAGRITTE

“The Treachery of Images” is a painting by René Magritte. It is a very simple image of a pipe that one might smoke, with the words below (in French), “This is not a pipe”. Magritte’s point was that the painting wasn’t a pipe, but rather an image of a pipe.

A “preemie” (sometimes “premie”) is a preterm or premature birth.

35 Tower for a pet who likes to climb and hide : CAT CONDO

A cat tree (also “cat condo”) is a manufactured structure provided to indoor cats for play, relaxation and sleep. Apparently, an important feature is height, as cats feel more secure lying high up, with an expansive view of their surroundings.

37 Target of an annual vaccine : FLU

Ruminants are animals that “chew the cud”. Ruminants eat vegetable matter but cannot extract any nutritional value from cellulose without the help of microbes in the gut. Ruminants collect roughage in the first part of the alimentary canal, allowing microbes to work on it. The partially digested material (the cud) is regurgitated into the mouth so that the ruminant can chew the food more completely, exposing more surface area for microbes to do their work. We also use the verb “to ruminate” in a figurative sense, to mean “to muse, ponder, chew over”.