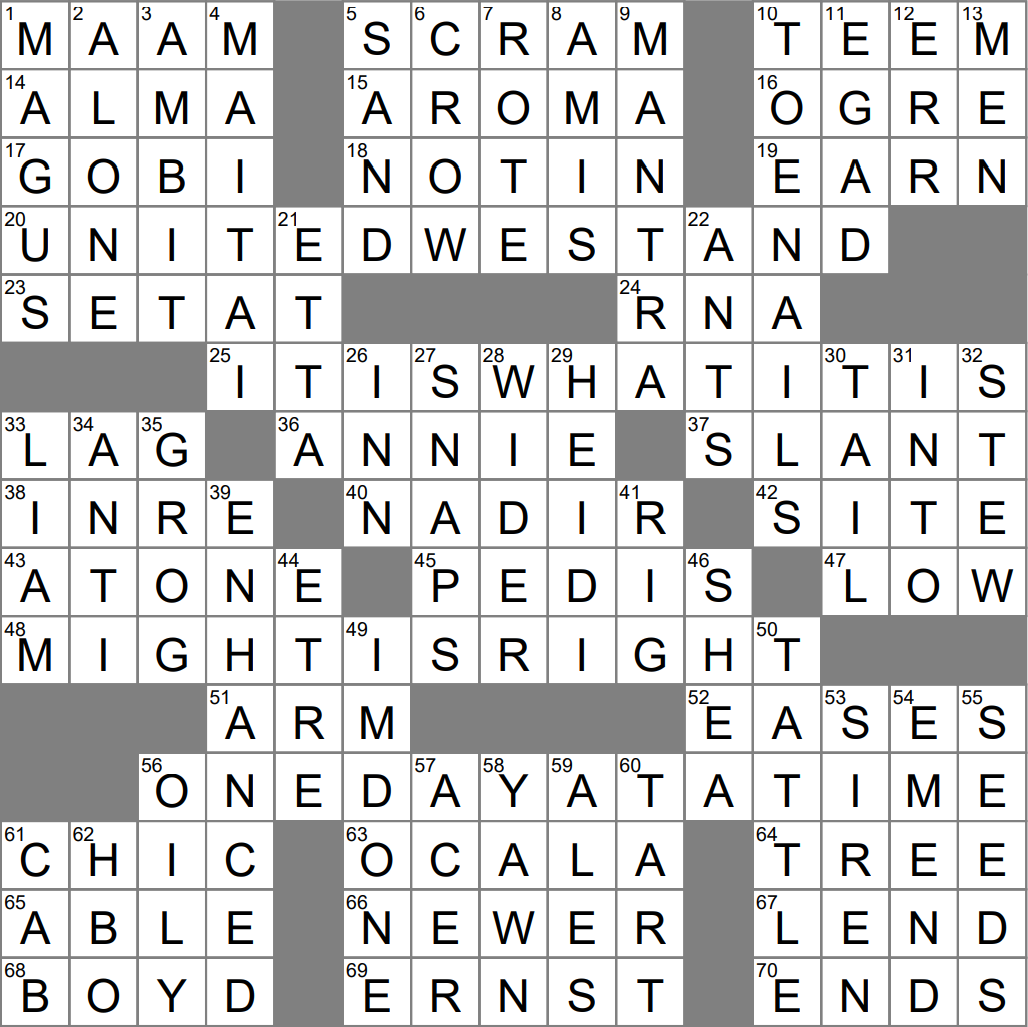 Today’s Theme (according to Bill): Saws

The Gobi, the large desert in Asia, lies in northern China and southern Mongolia. The Gobi desert is growing at an alarming rate, particularly towards the south. This “desertification” is caused by increased human activity. The Chinese government is trying to halt the desert’s progress by planting great swaths of new forest, the so-called “Green Wall of China”. The name “Gobi” is Mongolian for “waterless place, semidesert”.

24 Genetic material in some vaccines : RNA

A vaccine used to be a modified virus administered to an individual to stimulate the immune system into developing immunity, until mRNA vaccines were introduced to combat COVID-19. British physician Edward Jenner came up with the first vaccine, injecting people with the cowpox virus in order to prevent smallpox. The term “vaccination” comes from the Latin “vaccinus” meaning “from cows”, with “vacca” translating as “cow”.

Annie Leibovitz is an outstanding photographer who is best known for her portraits of celebrities. Perhaps her most famous image is one taken of John Lennon and Yoko Ono for the cover of “Rolling Stone” magazine. It features Ono and Lennon lying together on the floor, with a nude Lennon kissing the cheek of a fully clothed Ono. Five hours after the photo was taken, Lennon was murdered outside the Dakota Building in Manhattan, where he lived.

To atone is to make “reparations”, to “repair” a wrong.

64 Image in the Timberland logo : TREE

Woody Boyd is the lovable and naive bartender on several seasons of the sitcom “Cheers”. Woody is portrayed by Woody Harrelson. The Woody character replaced the bartender named “Coach” when actor Nicholas Colasanto passed away.

The wonderful sitcom “Cheers” ran for eleven seasons on NBC, from 1982 to 1993. “Cheers” spawned an equally successful spin-off show called “Frasier”, which also ran for eleven seasons and often featured guest appearances of characters from the original “Cheers”. The Cheers bar was styled on the Bull & Finch Pub in Boston (in which I’ve had a pint of Guinness or two!). The owner of the Bull & Finch cleverly agreed to the initial interior and exterior shots, charging only one dollar. Since then he has made millions from selling “Cheers” memorabilia, and also from increased trade.

An ambit is an outer boundary or limit, a circumference. The term can also be used to mean the sphere or scope of influence. “Ambit” comes from the Latin “ambire” meaning “to go around”.

The mai tai cocktail is strongly associated with the Polynesian islands, but the drink was supposedly invented in 1944 in Trader Vic’s restaurant in Oakland, California. One recipe is 6 parts white rum, 3 parts orange curaçao, 3 parts orgeat syrup, 1 part rock candy syrup, 2 parts fresh lime juice, all mixed with ice and then a float added of 6 parts dark rum. “Maita’i” is the Tahitian word for “good”.

Indoor volleyball was invented in 1895 and was originally called “mintonette”, a reference to the related game of “badminton”. The variant called beach volleyball originated in 1915 on Waikiki Beach in Honolulu, but was popularized on the beaches of Santa Monica starting in 1920.

22 Inhabitants of a classroom “farm” : ANTS

27 Round closers on a onesie : SNAPS

A onesie is a baby’s one-piece bodysuit, and is a common gift at a baby shower.

Attorney and politician Heidi Heitkamp took her seat in Congress in 2013, making her the first woman elected to the US Senate for North Dakota. Democrat Heitkamp lost her seat to Republican Kevin Cramer in the 2018 election.

Comets and asteroids are similar, both being relatively small celestial bodies orbiting the sun. Comets differ from asteroids in that they have a coma or tail, especially when they are close enough to the sun. The coma and tail are temporary fuzzy atmospheres that develop due to the presence of solar radiation. Comets are sometimes referred to as “dirty snowballs”, a reference to their composition: rock, dust, water ice and frozen gasses.

We often use the term “crockpot” as an alternative for “slow cooker”. The generic term comes from the trademark “Crock-Pot”, which is now owned by Sunbeam products.

33 Hemsworth of “The Hunger Games” : LIAM

Citi Field is a relatively new baseball stadium used by the New York Mets that sits right next door to the site of Shea stadium, where the Mets had played for decades. The new facility’s name comes from corporate sponsor Citigroup.

Although a tornado (plural “tornadoes, tornados”) can be encountered in many locations around the world, it is most likely to be experienced in North America, and particularly in “Tornado Alley” in the central US. The Canadian Tornado Alley in southern Canada is where one is second most likely in the world to encounter a tornado.

A person described as “unctuous” is oily and insincere. “Unctum” is the Latin for “ointment”.

“Barry” is a dark comedy TV series starring Bill Hader as an Ohio hitman who questions his life of crime. Veteran actor Henry Winkler plays an award-winning supporting role as the teacher of an acting class that the hitman joins.