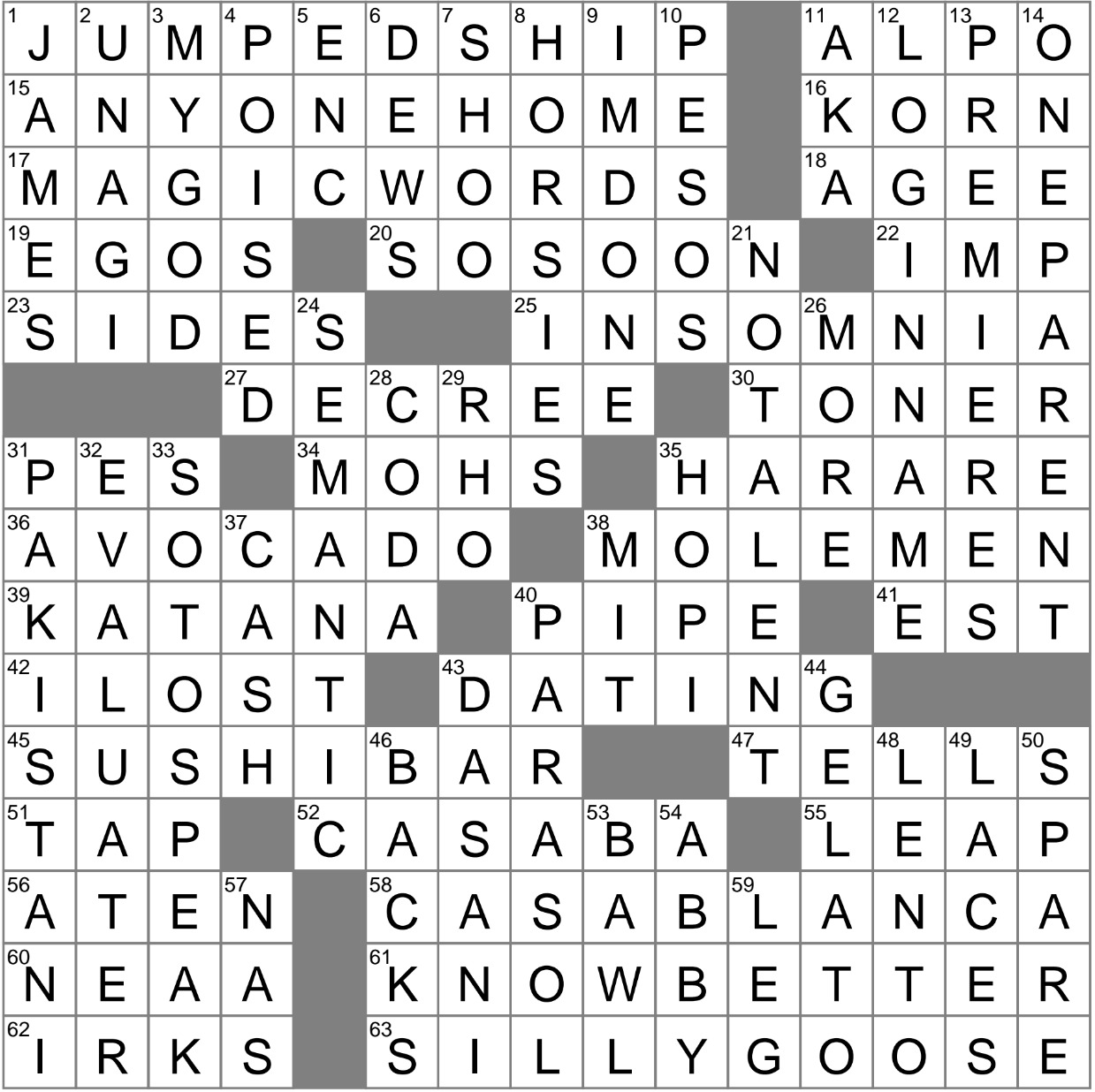 Alpo is a brand of dog food introduced by Allen Products in 1936, with “Alpo” being an abbreviation for “Allen Products”. Lorne Greene used to push Alpo dog food in television spots, as did Ed McMahon and Garfield the Cat, would you believe?

Korn is an alternative-metal band from Bakersfield, California. The band’s name is derived from a fan suggestion of “Corn”. The suggested name was considered too bland and so was prettied up to Korn, with the letter “r” capitalized and written backwards.

Steve Agee is multitalented. As a comedian, he had a regular role on “The Sarah Silverman Program”. As a more serious actor, he had a role in the superhero movie “The Suicide Squad” (2021). As a musician, he played guitar and bass in several rock bands in the nineties.

“Peacemaker” is a TV show based on the DC Comics superhero Peacemaker. It is a spinoff from the 2021 movie “The Suicide Squad”. John Cena plays the title character, both in the series and in the film.

25 Trouble getting down? : INSOMNIA

A skin toner is a cosmetic used to cleanse the skin and to shrink pores.

An astringent is a chemical compound that tends to shrink or constrict body tissues.

34 Mineralogist who created a scale : MOHS

Harare is the capital of Zimbabwe, and the African nation’s largest city. It was founded by the British in 1890 as Fort Salisbury (later just “Salisbury”). The outpost was named after Lord Salisbury, who was Prime Minister of the UK at the time. Salisbury was renamed to Harare in 1982, on the second anniversary of the independence of Zimbabwe. The name “Harare” applied to the area in which Fort Salisbury had been erected. “Harare” is a local word meaning “It doesn’t sleep”, a word applied to locations with constant noise.

A katana is a curved sword worn by the samurai of Japan. It is sometimes referred to as a “samurai sword”.

40 Image in Magritte’s “The Treachery of Images” : PIPE

“The Treachery of Images” is a painting by René Magritte. It is a very simple image of a pipe that one might smoke, with the words below (in French), “This is not a pipe”. Magritte’s point was that the painting wasn’t a pipe, but rather an image of a pipe.

Crenshaw melons are crosses between casabas and Persian melons, and are thought to have originated in Turkey.

A casaba is a type of honeydew melon that ripens relatively late in the season, and so is classed as a winter melon. The casaba takes its name from the Turkish city of Kasaba, from where the fruit was imported into America in the late 1800s.

58 Classic film based on the play “Everybody Comes to Rick’s” : CASABLANCA

“Everybody Comes to Rick’s” is a play by Murray Burnett and Joan Alison that they wrote in 1940. Before it could be staged, Warner Brother bought the play and adapted it into the hit 1942 movie “Casablanca”. There was to be no stage production of the play until 1991, when it ran for six weeks in London.

The National Oceanic and Atmospheric Administration (NOAA) is one of the seven federal uniformed services, namely:

Lily James is an English actress who had a recurring role in the hit TV show “Downton Abbey”, playing Lady Rose Aldridge. Her breakthrough in films came with the title role in the 2015 romantic fantasy “Cinderella”, directed by Kenneth Branagh. For several years, James was in a relationship with Matt Smith, one of the incarnations of “Doctor Who”.

“Pam & Tommy” is a biographical drama miniseries about celebrity couple Pamela Anderson and Tommy Lee. The title characters are played by Lily James and Sebastian Stan. Central to the story is the unauthorized release of a sex tape made by the pair, and the impact that the release had on their turbulent three-year marriage.

5 Abbr. on a business letter : ENC

Code Red is a cherry-flavored variant of Mountain Dew that was introduced in 2001.

A sobriquet is an affectionate nickname. The term “sobriquet” is French, in which language it has the same meaning.

In linguistics, semantics is the study of meanings, the meanings of words, phrases or larger units of text/speech.

28 Oscar winner about a teenager who is the only hearing member of her family : CODA

“CODA” is a 2021 movie, a remake of the 2014 French-Belgian film “La Famille Bélier”. The English-language version stars Emilia Jones as the only hearing member of a deaf family struggling with a fishing business in Gloucester, Massachusetts. “CODA” was the first film distributed by a streaming service (Apple TV+) to win a Best Picture Oscar. The title “CODA” is an acronym standing for “child of deaf adults”.

Rho is the Greek letter that looks just like our Roman letter “p”, although it is equivalent to the Roman letter R. It is the 17th letter in the Greek alphabet.

31 Many an Urdu speaker : PAKISTANI

Many members of the Hopi nation live on a reservation that is actually located within the much larger Navajo reservation in Arizona.

The MIT Mystery Hunt is an annual event involving teams of students competing to solve extremely complex puzzles. The puzzles are arranged in a series, all pointing to the location of a coin hidden on the MIT campus. The team winning in one year sets the puzzles in the following year.

A lento passage is a piece of music that has a slow tempo. “Lento” is “slow” in Italian.

Abby Wambach is a retired professional soccer player who was named FIFA World Player of the Year for 2012. She played for the US national team in all four World tournaments from 2003 to 2015.

57 Rapper who narrates Netflix’s “The Get Down” : NAS

“The Get Down” is a Netflix show about a group of teenagers in New York City witnessing the rise of hip-hop and disco music in the 1970s.