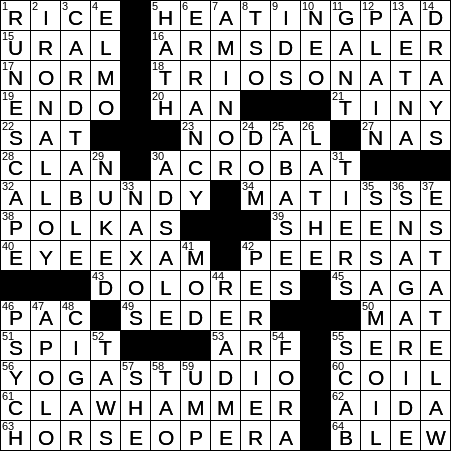 Golden rice is a genetically modified rice that has been engineered to biosynthesize beta-carotene. Beta-carotene is a precursor to vitamin A, and so the rice is intended for consumption in parts of the world where dietary vitamin A is in short supply. The extra beta-carotene gives the rice a distinctive yellow color. As one might imagine, the production of golden rice is controversial …

“War Dogs” is a 2016 dark-comedy film about two arms dealers with a US Army contract to supply ammunition to the Afghan National Army. The dealers are played by Jonah Hill and Miles Teller. The movie is based very loosely on a true story.

Apparently, the phrase “my dogs are barking” meaning “my feet are hurting” originated in America in the 1920s. From there evolved the use of the term “dogs” for “feet”.

28 One may have its own tartan design : CLAN

Al Bundy is a lead character in the television sitcom “Married with Children”. Bundy is played by Ed O’Neill, the actor who later took the role of Jay Pritchett on the very entertaining television show “Modern Family”.

Henri Matisse was a French artist renowned for his contribution to modern art. In his early career, Matisse was classed as a “fauve”, one of the group of artists known as the “wild beasts” who emphasized strong color over realism in their works. He was a lifelong friend of Pablo Picasso, and the two were considered to be good-natured rivals so their works are often compared. One major difference between their individual portfolios is that Picasso tended to paint from his imagination, whereas Matisse tended to use nature as his inspiration.

Dolores O’Riordan was a musician and singer who was best known as lead singer for Irish rock band the Cranberries. By all accounts, O’Riordan was a troubled soul. She was diagnosed with bipolar disorder, and in 2014 was arrested for an air rage incident on an Aer Lingus flight from New York to Shannon. In 2018, she was found dead in London hotel room, having drowned in the bathtub while intoxicated with alcohol.

Charoset is a sweet paste made from fruit and nuts that is served at a Passover Seder.

“Horse opera” is a slang term for a Western movie or show.

RuneScape is a free, multiplayer, online role-playing game (MMORPG) that was introduced in 2001. With over 200 million accounts opened, RuneScape is the largest free MMORPG in the world.

“St. Elmo’s Fire” is a 1985 Brat Pack film. The cast includes Brat Pack members Emilio Estevez, Rob Lowe, Andrew McCarthy, Demi Moore, Judd Nelson and Ally Sheedy. Unlike so many of the Brat Pack films, the critics hated this one. Indeed, Rob Lowe earned himself a Razzie Award for Worst Supporting Actor for his performance.

The honorific “Dom” is used in English for monks of certain orders, such as Benedictines and Carthusians. The term is a shortened form of the Latin “dominus” meaning “master, owner”.

Naxos is the largest island in the Cyclades group in the Aegean Sea. According to Greek mythology, Zeus was raised in a cave on the island. Today, Naxos is famous as a source of the rock emery, which is used to make the abrasive powder that has the same name.

Sesame oil is extracted from sesame seeds. Sesame oil is one of the nutritionally “good” oils, in that it is high in polyunsaturated fatty acids. Unlike most “good” oils, sesame oil keeps at room temperature, due to the presence of naturally occurring preservatives.

42 Water in a green bottle : PERRIER

A male goose is called a gander, with the female simply being referred to as a “goose”. Young geese are called goslings.